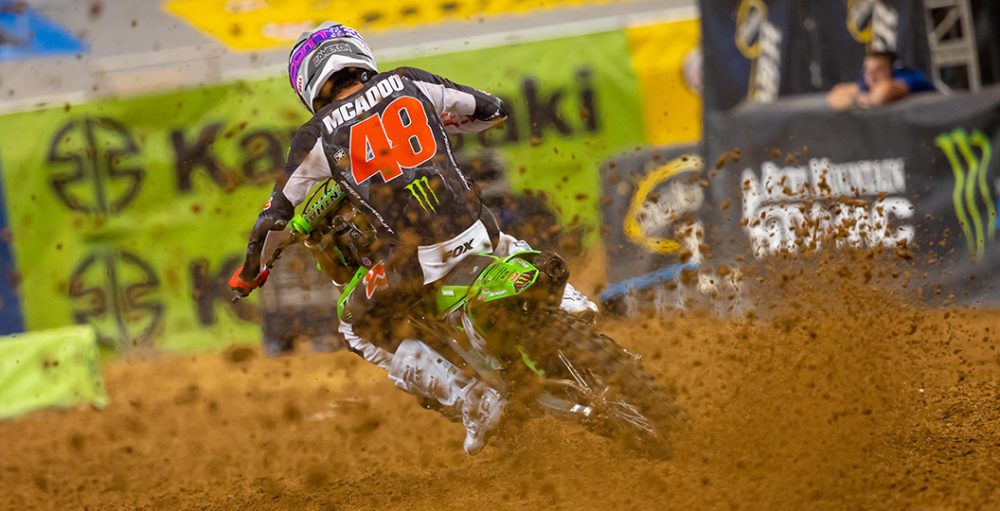 It is a case of one in and one out at the Monster Energy Pro Circuit Kawasaki squad. Cameron McAdoo will miss this weekend’s Atlanta Supercross, after sustaining a shoulder injury at press day in St. Louis, but Austin Forkner will return from the collarbone injury that he suffered in Arlington. McAdoo shared the following statement over on social media, explaining the extent of his injury and what his short-term plan looks like.

“Quick update: As most of you know last week I had a small crash that resulted in a grade three AC separation. Unfortunately, I will not be racing in Atlanta this weekend as my shoulder just isn’t strong enough yet to race competitive and safely. I am obviously very disappointed; there is nothing I want more than to be out there racing and I have been feeling so good on the bike lately. We are doing everything possible to be back strong and racing ASAP! Thanks everyone for your support see you soon.”

McAdoo is still second in the 250SX East standings, despite missing one of the first six rounds, but will lose that spot to Rockstar Energy Husqvarna Factory Racing’s RJ Hampshire this weekend. McAdoo has won one round this year, that being Arlington, which was the round that Forkner sustained his collarbone injury at. Forkner is set to return to racing this weekend; he will sit alongside Jo Shimoda beneath the ‘green’ tent.

“GUESS WHO’S BACK!? @AustinForkner will join @JoShimoda at this weekend’s East/West Showdown in Atlanta. Let’s wish him good luck!” – @PCRaceTeam