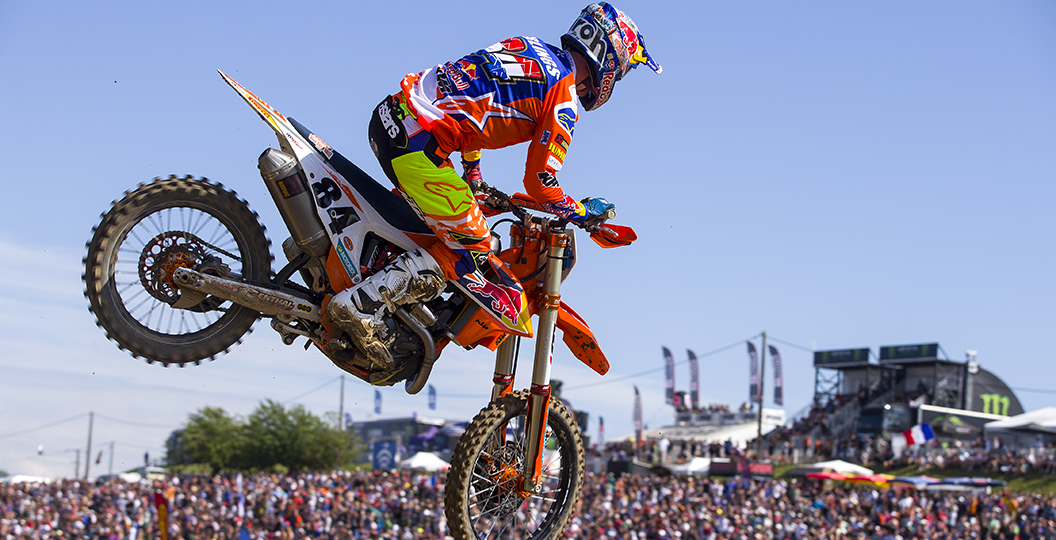 After attending thirty-one events on different continents thus far this year, those of us at MX Vice have acquired answers to a lot of questions that you have. That is why things have opened up in this new feature. If there is something on your mind, email [email protected] or get in contact via the various MX Vice social media channels.

“Do you think anyone can realistically step it up and challenge Jeffrey Herlings in MXGP next year?” asked Harry Leverett on the MXVice.uk Facebook.

This is a huge question and one that will shape the future of the FIM Motocross World Championship. Will the next season turn out differently and leave some puzzled, as Jeffrey Herlings is made to look mortal? It just seems so far-fetched, based on how the previous term ended, because of how much of a jump a rider like Antonio Cairoli has to make to match him consistently, let alone the rest of the competition. It is worth noting that Cairoli actually believes that he can do that though and plans to make it a reality by upping his game in the off-season, so it is actually wise to doubt him?

Even he stated that it will be difficult to improve in the areas that he needs to though, referring to endurance. “The endurance for sure first, because especially the first part of the season I was leading a lot of races until the last five minutes and then he got by me in the last five minutes,” Cairoli told MX Vice exclusively. “This is difficult to improve, because it is one part that you need to work [on] a lot. This is the only way to try to beat him, because I have to say his intensity is incredible.” Perhaps the greatest question is whether or not Herlings will perform at the same level through the off-season.

It is well-known that Herlings has pushed himself an insane amount over the last twelve months, so will he be able to sustain that? It is worth noting that he actually said he would able to for the next couple of years, which probably struck fear into the hearts of his competitors. So, in conclusion, I think that Herlings is going to have things under control for quite some time now. Why would anyone argue against that? It is amazing what he has achieved, as one does not reach that level through luck. End of story. – @_LewisPhillips

“Was there ever an update from Ken Roczen after the MXoN?” asked Stuart Harper on the MXVice.com Facebook page.

This is still just puzzling. Ken Roczen was a shadow of his former self, meaning the guy who raced at Ironman a month prior to the Motocross of Nations, and there has really been no explanation. Roczen did not appear in any post-race interviews on any website nor did he really comment on the event on his social media, so what the hell happened? It was obviously just an off day where nothing really went right. It is worth noting that he crashed in turn one in the first moto, which obviously did not help his situation, then moto two was respectable. It was not great but by no means could it be labelled a disaster.

The fact that he fell in the first turn of race one is a worthy excuse for him finishing in twenty-fifth, but then someone like Antonio Cairoli was in the same position and charged up to sixth. It was just weird. Is it worth putting too much thought into his performance? No, not really, as it was just a single event and every rider has experienced those off days. It is unfortunate that he will not have a chance to silence his doubters until the gates drop at Anaheim 1 in a couple of months. The common consensus is that a guy is only as good as his last race and that sentiment will unfortunately linger for the rest of the off-season. – @_LewisPhillips

“Has Eli Tomac got big enough balls to come to Assen?” asked Thomas Glynn on the MXVice.com Facebook page.

This question is obviously not worded correctly at all. It does not come down to having the guts to do it or anything like that and it is impossible to predict what Eli Tomac will do at this stage. Will he be healthy? Is he going to be on top form? Will he be the best sand rider available? Tomac has openly stated that he has realised the error of his ways though and that he will not be turning down opportunities to represent Team USA again, so I guess that everyone has to trust that he means that?

It is not ludicrous to think that he may not get picked though, as the sand levels the playing field somewhat. There is just so much to consider in all of this! It is going to be an interesting plot to follow in July and August next year. – @_LewisPhillips

“Is Dean Wilson eyeing up rides in MXGP at the moment?” asked @Robert.Loveridge on the @MXVice Instagram account.

It is obvious why some presume that he is doing that currently, but it is not the case. Even if he is trying to lock something down in the FIM Motocross World Championship, he would not get too far as a lot of teams are full now. There are no factory or factory-supported slots left to fill and now those who are left on the market are fighting over the drips and drabs. Wilson turned down some smaller teams in the United States, so that he is not locked into a lacklustre contract and can take a fill-in deal. That is his plan and the European scene does not fit into that. – @_LewisPhillips

“Where is Max Anstie riding next year and what team will he be on?” asked Scott Reid on the MXVice.UK Facebook page.

“Do you know what Max Anstie is going to do next season?” asked @JoshLewis232 on the @MXVice Instagram account.

“Is there anything out there about where Max Anstie is going to be next year?” asked @69Trev on the @MXVice Instagram account.

This question has been asked so much! The deal that Max Anstie has signed will be officially announced at the beginning of next month, so everyone is going to have to wait for that. There have been a lot of rumours floating around in recent weeks and some are heading up the wrong path completely. I am sworn to secrecy and cannot reveal too much, but it is a good deal and one that may surprise some. Although going over to the United States was a realistic option, he will contest the FIM Motocross World Championship next year and add to the stacked premier class. – @_LewisPhillips