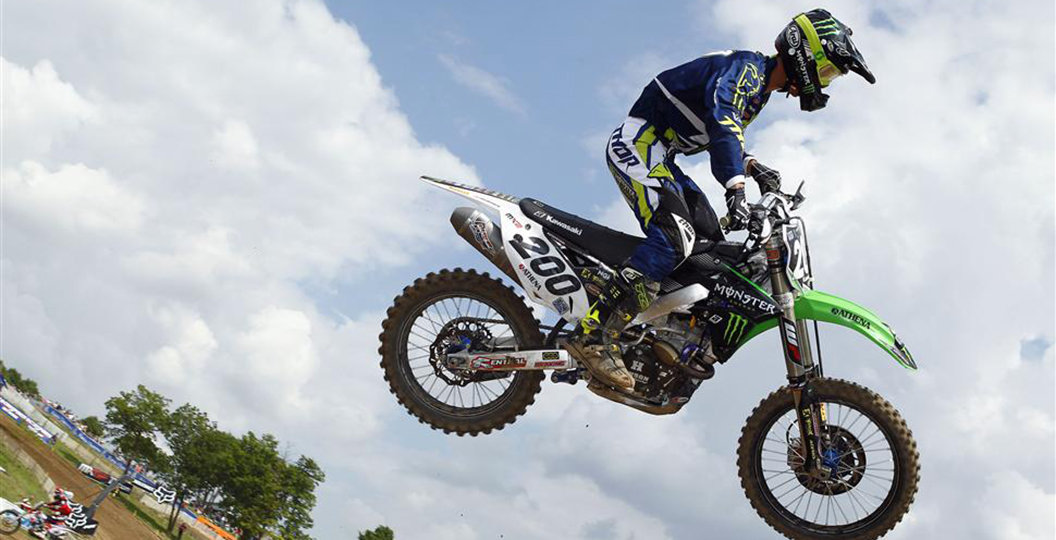 Arnaud Tonus is off to the USA

Current runner up in the FIM MX2 Motocross World Championship, Arnaud Tonus will move next season in the USA. The likeable Swiss rider signed a two years deal with team Monster Energy Pro Circuit Kawasaki, to race the SX Lites and Motocross US championships.

The leader of the MX2 team CLS Kawasaki Monster Energy will celebrates it’s twenty third birthday within a few days, and according to the age regulation can’t be anymore racing the MX2 Grand Prix in 2015. Arnaud who lost two seasons due to injuries had several opportunities to sign in a factory team to compete in the MXGP class next year, but he had also several offers to move in the USA. Dreaming when he was a kid to race there, Arnaud finally decided to cross the Atlantic and race in Mitch Payton’s team. He will join one of the most famous squad in the world, as team Monster Energy Pro Circuit Kawasaki claimed many titles in the ‘Lites class’ in the past seasons. With this announcement, Arnaud can now be fully focus on the next GP’s and Monster Energy Motocross of Nations. For 2015 team CLS Kawasaki Monster Energy has already secured a deal with Dylan Ferrandis and Thomas Covington, who will both enter their second season with the team.

Arnaud Tonus: “ I signed a two years contract with Kawasaki Pro Circuit, and I’m really happy to enter a new experience in such a prestigious team. It was a dream for me to go racing one day in the USA, I have not so much experience in Supercross but I’m ready to go and work hard to get some good results there. We had a long reflexion with my family and my manager; of course I had several good opportunities to stay in Europe but due to my injuries in the last two seasons I’ve not achieved all my goals on a 250. Mitch (Payton) wanted me in his team and that’s a great honour, I’m also pleased to continue our great relationship with Monster Energy and Kawasaki; both have been nice with me when I had problems, so it’s perfect to stay with both companies. We’ll move with my fiancée in the US after the Motocross of Nations, we need to be organised as soon as possible to start working early. I know that there’s a lot of work, but I’m ready and excited by this new challenge.”

Jean Jacques Luisetti (CLS Kawasaki): “ I’m happy for Arnaud, as everyone dream to be one day part of the team Pro Circuit. I’m convinced that it was the best option for Arnaud, moving from our team to the best team in the world is great for him and I’m proud about this decision. I want to remind that if our team CLS is at this level now, it’s due to Mitch Payton; so to send one of our riders in his team is great, as PC is another member of the Kawasaki and Monster family. It’s a first move; maybe in the future Dylan will follow Arnaud! For next season Kawasaki ask team CLS to focus on the MX2 class, we have already signed Dylan and Thomas Covington, and we’ll probably have a third rider in the team.”

Steve Guttridge (Kawasaki Europe): “After such a great season so far for Arnaud here in MX2, it’s great to know that there’s opportunity to continue with our brand racing the KX250F again next year in the US with our top team there! Now I’m sure that he can focus and continue fighting for race wins here in World Championship on his Kawasaki.”

Mitch Covington (Monster Energy): “We are very excited to have Arnaud coming to California, and ride for Monster Energy, Pro Circuit and Kawasaki, he is an excellent choice for the team in the US and we look forward to make him part of the Monster family in the US. We’re very happy with his choice, it’s great to bring him over in the family in the US, and hope he will have a wonderful career in Supercross there. I know how hard it is for a rider to move on another continent, hopefully Monster, Pro Circuit and Kawasaki will make that transition easier for him, like Monster, Kawasaki, CLS and KRT made it easy for my son Thomas when he came here. We’re looking forward to that, but before we hope to see Arnaud winning some GP’s in Europe, before moving to the US.”