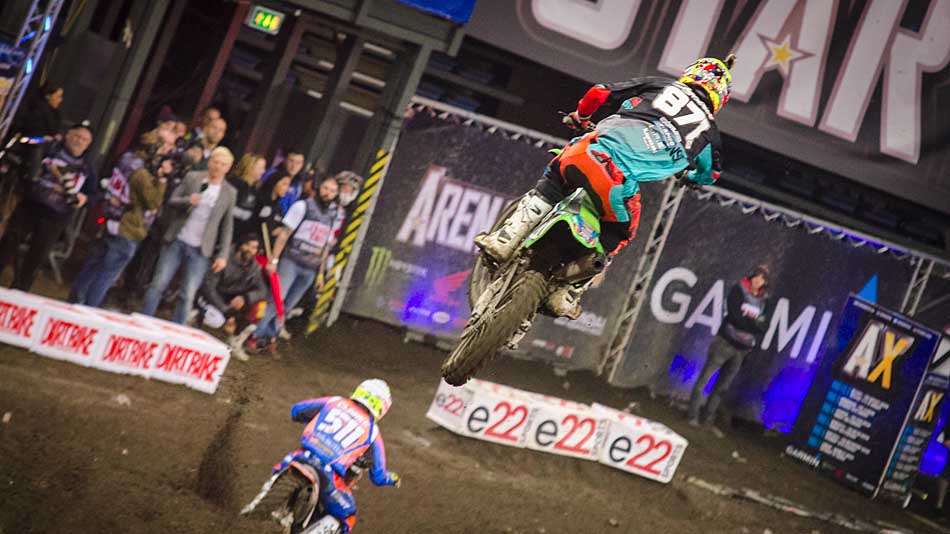 Frenchman Fabien Izoird took the win on the second night of superb arenacross racing in Belfast.

Steven Clarke almost made it two in a row but with two laps to go the young Brit came together with a charging Izoird and went down almost taking the LPE Kawasaki man with him! Iziord stayed up and took the win as Clarke re-mounted to hang onto second.

Izoird now leads the points because he also won the head to head ironically against Clarke who was leading there too only to fall and give Izoird the win in that one too!

Elliott Banks- Browne put the two big crashes from Friday night’s final behind him to get on the podium in third. Although he also hit the ground in the final he remounted and got back past Daniel McCoy.

Pre-race favourite Kristian Whatley had a terrible night. He was third in the first heat only to crash himself while trying to put a hard pass on Rombaut for second. He crashed again en route to ninth. An impressive ride through the field to second behind teammate McCoy in his second heat race meant Whatley made it straight into the main, but with a bad gate pick.

In the main Whatley was mid-pack and trying to come through but ended up crashing twice  to finish at the back of the field. Starts are everything in Arencross and Whatley found out today that the fastest guy doesn’t always win.

As usual the rest of the racing was epic.

Gordon Crockard stole the show in the LCQ with a rare holeshot and run-away victory to the delight of the home crowd. GC got the biggest roar of the night for the win as Brad Anderson took the final main event place coming home second.

Tyler Villopoto had another nightmare. He was running a good fourth and looking strong in heat one only to be taken out by Bryan Mackenzie. This left Villopoto on the outside gate in his second heat where he crashed again. Another bad start meant he didn’t get a sniff of Anderson or Crockard in the LCQ.

In the schoolboy classes it was Todd Kellett who took another victory in the Rookies class with Glenn McCormick again in the second. These two were the class of the field but by the time McCormick got passed Mitchell Lewis into second, Kellett was long gone.

Lewis then crashed doubling the triple and Jay Thomas landed on his bike! This let the consistent Ben Harrison take an untroubled third.

Aaron Booker won the BW 85 class despite late pressure from Jed Etchells with Lee Perfect in third. Harry Kimber was second but endoed while doubling the triple and just missed getting his head landed on by inches. Kimber got back up and salvaged fourth.

An ecstatic Ben Burridge won the 85 SW from Kurt Griffiths and Lewis Hall while an impressive Buster Hart took victory again in the 65s. Remember the names…they could be the stars of the future!

The freestyle also entertained as Edgar Torronteras stole the show once again with his famous human beatbox routine. The guy is a legend and had the sold out crowd joining in with his beats!

So it’s on to Birmingham and Steven Clarke wants to steal back the red plate from Izoird in front of his home fans but can he doing? We only have a week to wait!