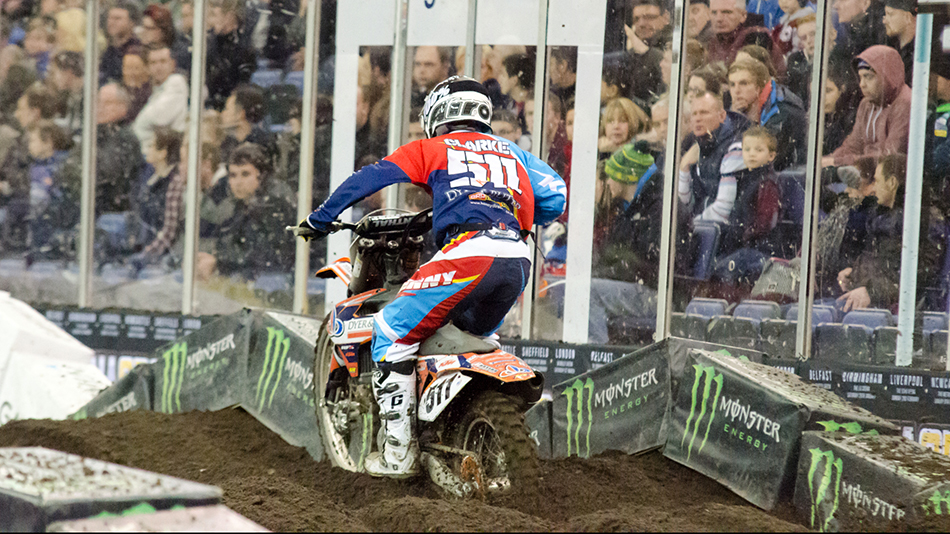 Steven Clarke was hovering around as a podium contender all day on Friday. But when he got the holeshot in the main, he suddenly found an extra burst of speed and confidence to hold off Kristian Whatley.

Whatley had won both his heats and was probably the favourite going into the main but Clarke held strong, adapting to the race as it went on, and took a very impressive win on the Dyer and Butler KTM machine.

Clarke was bubbling over with excitement after the race and you could see just how much it meant to him, his family and the team to win the first round of the year. But as we found out Clarke isn’t counting his chickens, he knows that anything can happen and he has to keep his focus.

You made putting that coat on harder work than the main event!

Yeah! (laughs) I just got a good start and rode a smart race. I tried not to put a foot wrong, Whatley was riding well behind me. He was applying the pressure and he didn’t make it easy for me. Like I said, I just kept my head smart and I knew if I didn’t make any mistakes it would be hard for him to make the pass. It’s a different race tomorrow and anything can happen but I am excited to get a win and lead the points into tomorrow.

Whatley was coming and he was really quick in the whoops but then I noticed you started wheeling into the first half of them. Did that help?

As a rider you have to develop yourself to when the track makes changes one line might be good in the beginning but when that gets worn out you have to be ready to adapt and change your lines up and I think I handled it quite well. I’m just happy and I can’t wait for tomorrow.

You were top 3/5 speed all day did you expect you could win the main event? That you just needed the start?

I knew I had the speed to win. I have done more supercross than anyone here put together with being in America and that. But that doesn’t really count into today it’s more about getting the start because we are all really close on times anyway. As long as you ride a smart race and don’t make too many mistakes it’s anyone’s game really. Tomorrow will be another day, they are changing the track a bit and with everyone being so close I would expect some more good racing tomorrow.

The track was pretty soft there in qualifying but maybe wasn’t as bad in the race? I don’t know…what was your take on it?

It was pretty soft still in the main, it got down to the plywood in a lot of places but they prepped it before the main so in a few sections it was better but the whoops were equally bad all day. There’s just so much moisture in the dirt and it is really sandy dirt so they can’t expect it to pack down too hard. They have done quite well, I was impressed with the way they handled the track prep.

And just a word on Dortmund last weekend, it was a bit up and down I believe?

I got really bad food poisoning just before I flew to Germany and that played on me really bad. I had no energy so that was tough. It took until Saturday afternoon before I could keep any food in my stomach without it coming out of either end – let’s just leave it at that! But I came out with a fifth on Sunday night which put me tenth overall on the weekend. It was nice to have some gate time before I came here.

I just can’t thank my team Dyer and Butler racing KTM enough for sticking behind me and letting me go to Germany and rider for a different team. A lot of people wouldn’t do that but these guys are good and they are behind me and believed it would be beneficial.

You’re the point’s leader now. Does that change your outlook for the rest of the series?

Not really no -anything can happen in this game. You could win five in a row and then not qualify for the next one. You have to take as many points as you can when you can.