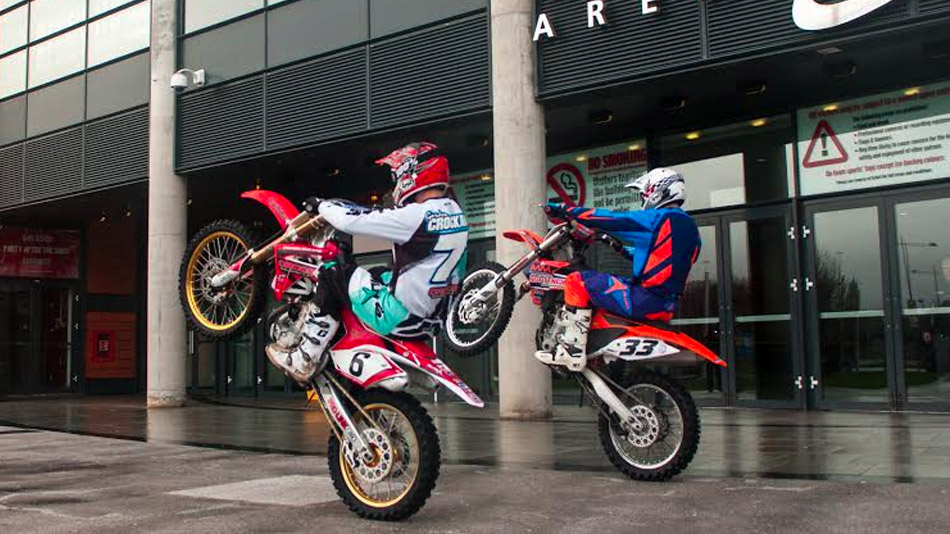 MX Vice caught up with the local Irish riders keen on impressing their home crowd in Belfast on Friday and Saturday night.

Three time British motocross champion and former British supercross champion Gordon Crockard gave us his views on competing in the Garmin Arenacross series as a wildcard in Belfast, as did British championship competitor and Multi-time Irish Champion Wayne Garrett.

MX Vice: I don’t know how many times you’ve done this now, but you still seem to be looking forward to it!

Crockard: I have done it from 2001 and rode every year they had it. There was a lull between 2007 and 2010, three years where it didn’t run. But yeah I have enjoyed it, it has been brilliant.

MX Vice: You won a heat race last year, are you looking for another victory in some form this year?

Crockard: Oh absolutely. The heat races are really important in terms of your contribution to your chances in the main because it is your gate selection. Even your qualifying time during the day is important because that decided the position you go to the gate for your heat.  It is all really important and you need to be in there if you are serious about running at the front.

Getting off the start good is 80% of the race and getting a good run through the whoops is the rest of it.

MX Vice: You’re back on Honda but have you had any chance to prepare indoors?

Crockard: Yeah I have been in the garage and it’s indoor! So I have the petrol and the filter is clean and the bolts are tight so I have done a lot of indoor preparation!

No I haven’t had any preparation. I haven’t been taking part in any of the other overseas European races. In the past I had that luxury because I was competing in the likes of Malmo in Denmark or the German series. I know Dortmund was just last weekend and a lot of guys I am racing here have done Dortmund. There are three days of racing there and you do not get better preparation than that.

Even terms of sussing out the clickers to set on your bike, suspension, gearing. You are continually learning how to be at your best throughout the weekend.

I tried to do some riding over the Christmas period but it was a waste of time, it really was. And that’s not me being pessimistic it was just a waste. So I will be riding on experience and I think it will come round quite quickly for me, it usually does. I have been in this scenario a lot of times.

I am back on the Honda and I like the Honda. I think it going to work really well for me. I am really looking forward to putting it on the track. I have a good feeling from the bike and I want to enjoy that.

MX Vice: Is your thumbing giving you any problems?

Crockard: The thumb is what it is. It doesn’t bend and it does give me problems, I can’t say it doesn’t but it just is there as it sits on the bar and I get on with it. I don’t complain, I will never change it, so I don’t give it any thought at all. It would be like wishing for an extra set of eyes or wishing for your arm to bend somewhere else to be more flexible – it’s just not going to happen.

MX Vice: Are you planning on doing any outdoor races?

Crockard: Yes I am. I am planning a lot of racing this year. Last year I was very involved with the Honda program and other things. Also my practice track was closed down as well. I was in court last Friday about the track. I has been in court two years and last year the judgement as given that I had 6 days of use a week from April to October but the Council appealed  against that and it went back to court.

That’s my place of practice, that’s how I prepare for events, it’s how I set my bike up and it’s the formula I have known my whole life for doing the sport. With that being taken away from me I became very bitter actually with four strokes and the sport but the verdict will be in writing in a few weeks time. And it looks like I might get some use of some sort on the track and that means I can prepare for events having had a bit of handlebar time.

Crockard: I will do anything. I’m getting myself into really good shape for racing in the circumstance that some replacement rides come on offer. For instance when Max Nagl got injured for the factory team last year, I was offered the ride but I turned it down because of my thumb.

I want to get myself back in a strong form for riding and conditioning then opportunities may come round.  With Honda we have discussed me racing in GP events as well, I think it would be very constructive for the 150 series if I was taking part as well because it gives me the opportunity to give direct feedback to the riders about the track. So that is something I want to do and we are making some efforts to make that happen.

MX Vice: You missed it last year but you are back this year?

Garrett: Yeah I haven’t done it in a few years -I think 2010 was the last time I done it.  On both nights in both classes I made the final that year which I was pretty happy about. There is a big stacked field this year but it all comes down to a start. It’s not like outdoor racing or even full blown supercross, it’s arenacross so it is tighter and if you get a start, there is nothing you can do better or worse than anyone else. So hopefully get a good start and see what happens.

MX Vice: You’re back on KTM too

Garrett: Yeah I have been riding now since the start of January and every time I am riding it I am having fun and really enjoying it.  I haven’t had as much fun in a long time. I prefer the 350, it is a wee bit lighter and more fun to ride. As long as it’s fun then you’re going fast and that’s the main thing.