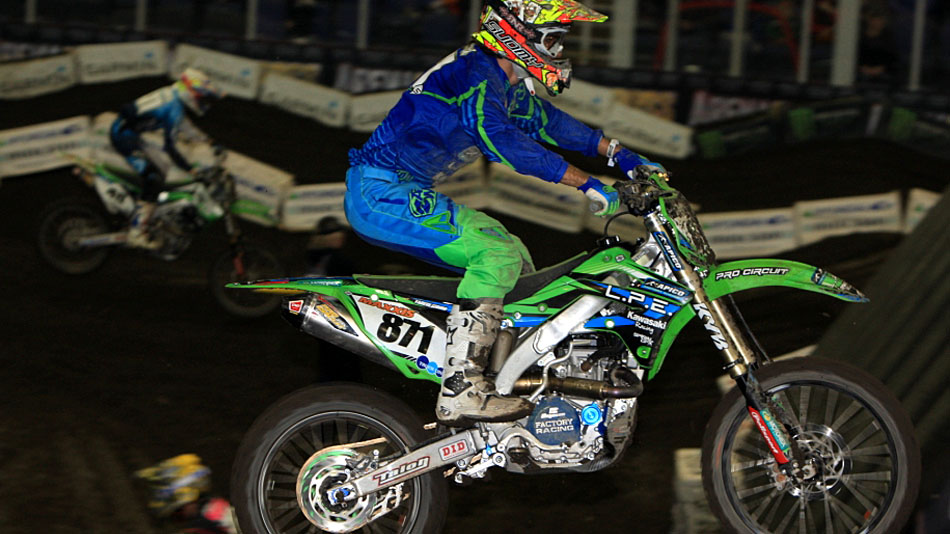 The 2014 season kicked off in fine style at the opening rounds of the Garmin Arenacross UK Series. Apico LPE Kawasaki took to the track with French riders Fabien Izoird and Loic Rombaut on Friday and Saturday evening in front of a packed house.

A soft track surface greeted the two riders but the both Fabien and Loic were able to post some impressive lap times during qualifying. With the quick, rapid race format which saw both riders taking part in two heat races to try and transfer to the main event and avoiding the dreaded LCQ.

In the opening heats of the night, Fabien Izoird took a well deserved third place in a close fought race and followed it up with second place in the second heat. Team mate Loic Rombaut produced two impressive race wins ahead of Banks-Browne and Clarke in each heat.

Following transferring directly to the Main Event, both Loic and Fabien lined up in the Head to Head races. After progressing through the first round, they both unfortunately got knocked out in the Semi’s and lined up against each other in the consolation final. In the Consolation Final Izoird took the win over Loic. The Head to Head meant that Izoird gained an extra 2 championship points and 1 point for Loic.

Next up was the Main Event and it was Loic who produced a fantastic start and was in the top three on the opening lap with Izoird just a few places back. Izoird was in fine form and passing riders each lap and soon just behind Loic. Then drama happened as Loic slipped off and remounted to finish in 5th place with Izoird ahead in third place and claiming the final spot on the podium.

Overnight the track was revised and redesigned ready for Round 2 of the series. In the heat races Loic took a second place finish in the opening heat and then a victory ahead of team mate Izoird in their second heat. Izoird scored a solid third in his opening heat, which saw both riders transfer to the main.

Once again in the Head to Head races, both riders were aiming to score as many extra points as possible. Loic went out in the first round, but meanwhile Izoird progressed all the way to the final were he went up against Clarke. Izoird and Clarke battled hard and fair, but it was Izoird that took the win after Clarke slipped off in a corner. The victory meant that Izoird gained 4 extra points for the championship.

The final race of the night was the Main Event which saw both riders start at the front and pushing forward. Fabien was running an impressive pace just behind early leader Clarke. Loic was also pressurising Banks-Browne in third. With just two laps remaining Izoird was able to close in behind Clarke and pass him at the end of the whoops, but Clarke tried to retake the lead in the next straight and tangled with Izoird and went down and left Izoird to take the win. At the end of the race Rombaut also finished in fourth place.

After the opening two rounds Fabien Izoird now leads the series and holds the Red Plate by 1 point going into the third round of the Garmin Arenacross UK series at Birmingham. Team mate Loic Rombaut currently sits in fourth place behind Daniel McCoy in third and Steven Clarke in second.

Fabien Izoird – It’s been pretty crazy opening two rounds and on the first day I was getting used to the bike as it’s a different bike to normal. I was happy with how the first round went and then in the second round I took the win in the Head to Head and felt good for the Main. In the Main event I got a good start and was behind Clarke and just waited my time and got the pass towards the end and took the win. It was a great feeling for myself and the team who have done a great job this weekend.

Loic Rombaut – The second round for me was much better than the first round as I felt more at home on the track and went 2 – 1 in the heat races and then finish fourth in the Main which is good for me and the team, I’m also fourth in the points and hopefully can build on that next weekend.

Steve James – it’s been a very busy week back in the workshop leading up to this weekend for Rounds one and two of the2014 Garmin Arenacross Championship. From arriving on Thursday to leaving on Sunday it’s been awesome with spectacular action packed close racing on both nights. I think the Arenacross Tour was good last year but this year is even better and the level of competition is much higher and the show itself is amazing. We had a pretty good start to the series this weekend with 3rd and 5th on the Friday night for Round 1 and then we had a win and 4th on the Saturday night Round 2. Fabien has a 1 point lead in the Riders Championship and takes the Red Plate into the next round and Loic sits in 4th place just 3 points off 3rd place in the riders Championship. Plus we also now have the lead in the Team Championship so I am pretty happy and I enjoyed the moment but I’m not getting carried away, we are just going to take it one round at a time. It’s a very tough series with a lot of very good riders that can all win and anything can happen in Arenacross so we need to stay focussed and the hard work starts now.

I would just like to thank all the team members, Riders, Mechanics, Team Helpers etc and my wife! For all the hard work and preparation leading up to Rounds 1 and 2 plus each and all of the teams sponsors as without them none of this would be possible.

Also competing at the opening rounds were SJR Kawasaki consisting of Ryan Voase on the number 32 and Erki Kahro on the 411. Both riders gave it their all at the weekend, Ryan was back to his best and anyone would think he was a young kid again, he was flying. Ryan had an awesome 3rd place in his first heat on Friday and was running 3rd again in his second heat when with 2 laps to go a rider went down in front of him and was left with nowhere to go and was collected by the rear wheel in the hand, arm and head, knocking him clean off and seriously knocked the stuffing out of him. This put pay to what would have been a transfer straight into the final and left Ryan battered and bruised so all he could do was go out and try his best. Unfortunately he was hurting too much to recapture his early form, but fair play to him for gritting his teeth and getting back out on track, hopefully he’ll be back for Round 3 next week.

Young Estonian Erki Kahro came into this not knowing what to expect as he’s never done any SX or AX racing before. He was a little nervous and tense but as the two nights went on his speed and confidence progressed and he was really starting to show some form. Unfortunately Erki was also hit by an injury blow as he was taken out by another rider in his final race on Saturday night resulting in Erki hurting his knee. He has gone for a x-ray today (Monday) to see if anything is broken and we are hoping not so that he can rest up and be back again for Round 3.