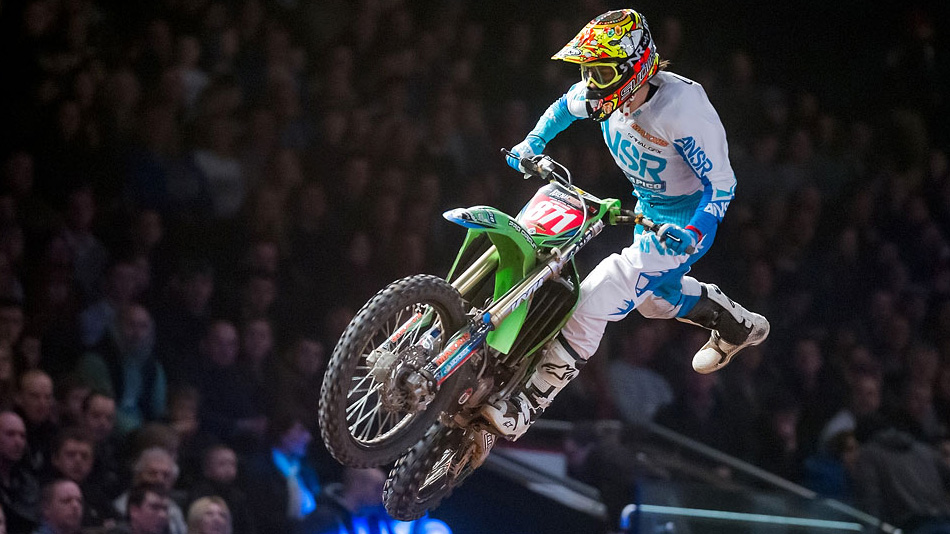 Following a success opening weekend of the Garmin Arenacross UK tour, the Apico LPE Kawasaki team headed to the third round at the LG Arena with high hopes of more success. After the soft track surface of Belfast both Fabien Izoird and Loic Rombaut were faced with a hard pack, slick circuit to do battle on.
During the practice and qualifying sessions, both riders quickly got settled with the track layout and set a number of fast lap times. With both riders qualifying well, they had strong gate positions for the heat races later in the evening.
The night show started with the qualifying heat races, first up was Fabien Izoird who stormed to a strong race win ahead of Nev Bradshaw. Next up was Rombaut who battled hard with Daniel McCoy and took a solid second place. In the next heat race both Fabien and Loic lined up together and produced a stunning display for the crowd as they finished with Loic taking the win and Fabien in second place and both riders safely transferring to the Main Event.
Before the Main Event, it was time for the Head to Head races and both Loic and Fabien battled their way into the points scoring final and lined up side by side. As the gate dropped it was Loic who got the jump but Fabien who took the win and the 4 championship points.
The final race of the day was the Main Event and when the gate dropped it was Daniel McCoy that got the jump just ahead of Izoird, with Rombaut stuck in the mid pack. As the race progressed Izoird was able to line up McCoy for the pass and take advantage of a mistake and claim the lead and race win. Rombaut produced a strong ride to recover to a well deserved fifth place finish.
At the end of the night Izoird currently leads the Championship by 14 points over Daniel McCoy with Steven Clarke in third and team mate Rombaut in fourth place, 19 points behind Izoird. The Garmin Arenacross UK Tour now heads to Liverpool this coming Sunday.
Fabien Izoird – It’s been another great weekend, I won the Head to Head against Loic which was fun for the team. In the final I got a good start and then was second on the opening lap. I was behind McCoy and was just waiting until the end of the race to make the pass. It was great to win again, for me and the team and to lead the championship standings by 14 points.
Loic Rombaut – Everything was good before the Main Event, I had two great heat races and second in Head to Head. Then in the Main Event I suffered a bad start and was down in 8th place, so I had to work hard to finish in fifth place. Hopefully next weekend will be a good event and I can finish on the podium alongside Fabien.
Steve James – Tonight was another good night for the team, both Fabien and Loic got to grips with the hard pack track quickly in practice and put some solid lap times down in the qualifying sessions. This gave them both good gate picks for the evening heat races. In the heat races they both got out the gate well and had good solid finishes with both of them taking a win a piece, transferring them both straight to the main event. Then the Head to Head was brilliant producing some great one lap races
with

Fabien and Loic coming through stiff competition to end up in the final together. It was a good clean race and they put on a good show for the paying public with Fabien taking the win and the 4 points and Loic 2nd taking 3 points. Then it was time for the Main Event, both guys lined up at the side of each other on the start and we all had our fingers crossed for a clean start. Both riders had been getting out of the start good all night so we was all pretty fired up for them both but unfortunately Loic got boxed in and was midfield. Fabien was around 3rd into the first corner but came out 2nd behind McCoy. Fabien gave chase and then waited until he could make a clean pass, which he did and then once in front he stepped it up a little to gap McCoy and take the win. The victory was awesome for both Fabien and the team. I felt for Loic as he had been on fire all night leading up to the final and he definitely had the speed for a podium finish but you needed the start. It was so hard to pass so he did very well to come from 8th to 5th and I know before long Loic will get on the podium, he has the speed and just needs a bit more luck. To come away again with the Red Plate was nice and Fabien now has a 14 point lead but there is still another four rounds to go and anything can still happen. So we need to stay focussed and keep up the hard work and Loic is in 4th place but he is only 4 points off Steven Clarke in 3rd and only 5 points off McCoy in 2nd place so it is very close and still all to play for as any of the top 6 riders can still win. On a separate note the team is currently leading the Team Championship which is also very important to us and all the other teams and it was nice to win that again, extending the lead to 18 points. Again we just need to take nothing for granted and hope we can keep the momentum rolling.
Tough night for SJR Kawasaki at the LG Arena
Also competing at the LG Arena were Ryan Voase and Erki Karho on the SJR Kawasaki Racing Team. In the heat races, Erki finished in 11th and 10th places in his two heat races. In Ryan’s two heat races he was able to finish in 12th and 11th places.
After the heat races both riders were required to go to the LCQ race and Erki had his strongest race of the evening to finish in 9th place, ahead of Ryan in 12th places. Unfortunately neither rider were able to transfer to the Main Event and will be hoping for better results at Liverpool next Sunday.
Steve James – Unfortunately my riders in my other team weren’t so lucky and had a tough night. Both Ryan and Erki rode hard but it just wasn’t to be. Erki is still suffering a bit from last week and is also still trying to get to grips with the fast pace, aggressive nature of Arenacross, but he is loving it and really enjoying the whole atmosphere of the event. Ryan is also still a bit battered and bruised from his big crash in Belfast but gritted his teeth and dug in but was very unlucky in both the heat races and ended up in the LCQ through no fault of his own. Both Erki and Ryan are ok though and dusted themselves down ready for another go this coming weekend at Liverpool and let’s hope the past city of culture holds better fortune for them