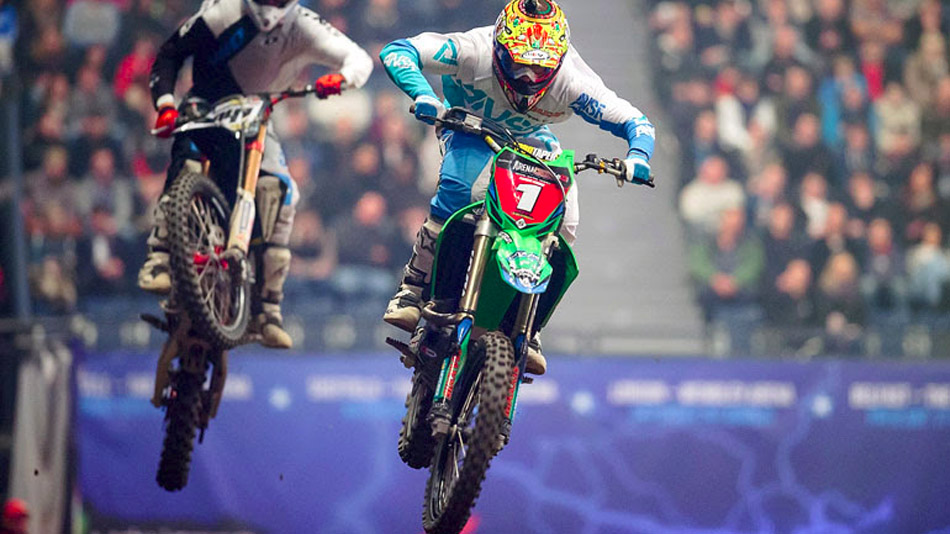 Apico LPE Kawasaki does the Double in the Capital

The capital city, London marked the final round of the 2014 Garmin Arenacross UK tour. After clinching the title at the last round in Sheffield, Apico LPE Kawasaki arrived at Wembley Arena looking to secure the team title as well.

During the daytime practice and qualifying session both Fabien and Loic looked at home on the technical track inside the Wembley Arena. After settling into the track both riders produced a number of fast laps to qualify in third place for Fabien Izoird and ninth place for Loic Rombaut.

Between the daytime and evening show, before Fabien and Loic had a busy schedule meeting the fans and giving a group of VIP guest a special guided tour of the track.

Once the lights went down it was race time and both Fabien and Loic lined up together in the first heat. When the gate went down Fabien fired himself into the lead only to go down on the first lap after tangling with another rider and had to restart dead last, meanwhile Loic made a bad start and had to work hard to recover to 4th place at the finish. After a hard fought race Fabien made a number of passes to finish in 5th place.

In the second set of heats, Izoird was out first and quickly took the lead and rode steady to take the race win. In the last heat race, Loic suffered again with his start and was in 6th at the end of the first lap. As the race went on Loic pushed forward to finish in 4th place and both riders transferred directly to the main event.& the Head to Head races.

Before the main event were the Head to Head races. Unfortunately Loic went out in the first round, while Fabien went out in the second round and took 4th place in the runner up final and one single championship point.

In the main event both Fabien and Loic suffered drama, with Loic crashing in the second corner and Fabien making a mid-pack start. As the race went on Fabien moved into sixth place, while Loic was fighting to catch the rest of the field. At mid race Fabien passed Angelo Pellegrini for 5th but made a small mistake and slipped back to 6th for the finish, with Loic finishing 12th.

The combined results was still enough to secure the team Championship, to go along with Fabien’s title and Loic finishing the championship in fourth place.

Fabien Izoird “I’m happy but I would have liked to finish the season with another win. I suffered a bad start and couldn’t find away into the front so I’m disappointed about that. I can’t be to upset as we have won the championship and the team championship so it’s been a great season.

Loic Rombaut “I’m happy for the team Apico LPE Kawasaki but unfortunately I’m not happy about my main event result. I started well in the final but me and Pellegrini touched on the first lap and I went down and finished 12th. It’s not best way to finish the series but hopefully I will be back with the team next year and I look forward to it”

Steve James “what can I say I’m very very happy having been chasing a Major title for the last five years or so and finally the hard work has paid off. This Garmin Arenacross Tour Pro Title is our first major championship win so to then back that up with the team championship as well is absolutely fantastic. I’m so happy but also a little emotional at the same time, it’s hard to believe we have actually done it and it hasn’t quite sunk in yet. Matt Bates and his hard working crew have put on an amazing series this year with top class venues, top class riders and teams and put on one hell of a show at every one of the 7 rounds, so thanks for that Matt you pulled it off mate. For us it was a team effort and we couldn’t have done it without the riders, Fabien and Loic, the mechanics, Minty and Ian, plus Chris the engine guy back at the workshop, the pit crew and team helpers, Adam, John, Ben and this weekend Ryan H and Uncle David, Rick Blyth our Press / Media guy, plus Dan back at the office for sorting out all the flights etc, every single person on the team plays a huge part so I would like to thank them all for their efforts.

Then we have each and every one of our team Sponsors to thank, Vesty and Scott at Apico, Dale and Dan at LPE, Howard and Ross at Kawasaki UK, David, Derek ,Don and Steve at Maxxis International, Deb, Beth and Tom at Truck Links, Joe at Henderson Insurance, Jim and Mitch at Pro Circuit USA, David and Nick at CGH, Martin, Sean, Matt and Ant at Spiral GFX, Lester and Nat at Rip n Roll, Nick and Richard at Pro Carbon, Rob at Talon, Jack at Raptor, Richard at Samco, Mark at Factory A.R.M.E, Martin and Neil at Fat Cat, Ed at DMP, Chris at CM Engineering, Mark at Muck Junkie, Rob at Regent MX, DC Bob, Mark at Thorseway and Salters Lane, Stalker MX, Twin Air, Pro Taper, Answer, Suomy, Polisport, Boyesen, Vertex, Samco, DiD, Motorex, Vesrah, Venhill, Uden Transport.

Then I have a few special mentions to people who have helped me along the way, Steve Henderson (Hendo) he helped when I first started by introducing me to people and sponsors for products within the industry to which I am very grateful, My Mum and Dad and my whole family who have always been behind me and given me endless support, my wife as she has had a lot to put up with over the years but she has always supported me and believed in me through the roller coaster ups and downs that running a team can put you through!! We haven’t had a proper holiday for over three years so I promised her that if we won the Championship I would take her on holiday so I can’t really get out of that one now ha ha even Fabien and Loic would joke with her at every round by saying we are closer to the Holiday!! I would also like to thank Gerard Valat, the riders manager for putting me in touch with Fabien and Loic and handling everything very professionally as always. Finally as I said after clinching the Pro Title at Sheffield I wanted to dedicate this to my late brother in law as without his input to the team none of this would have been possible. Then I have one last wish and that is to dedicate the Team Championship to Ted Curtis (Elvis Tedo). Ted was our team truck driver a real character and played a big part of our team for many years and he would have been so proud,

Thank you to everyone

SJR Kawasaki arrived at the Wembley Arena in London with only Erki Kahro competing the final round. During the qualifying session Erki felt more comfortable on the track and qualified in 18th place.

In the two heat races Erki rode so of the best races so far this season and took two 8th finishes, but unfortunately had to go to the LCQ once again. In the LCQ race Erki didn’t make the best start and finished in 6th to score a single point.

Erki Kahro “today was good, I suffered with the outside gates but I managed to get two 8th place finished in the heats, in the LCQ I got sixth place and 1 point. Overall the championship has been great fun and I have really enjoyed it, and I’ve managed to keep improving each week.

Thank you also to the SJR Kawasaki Riders Erki and Ryan and the Mechanics, Alistair and Jack we had a blast