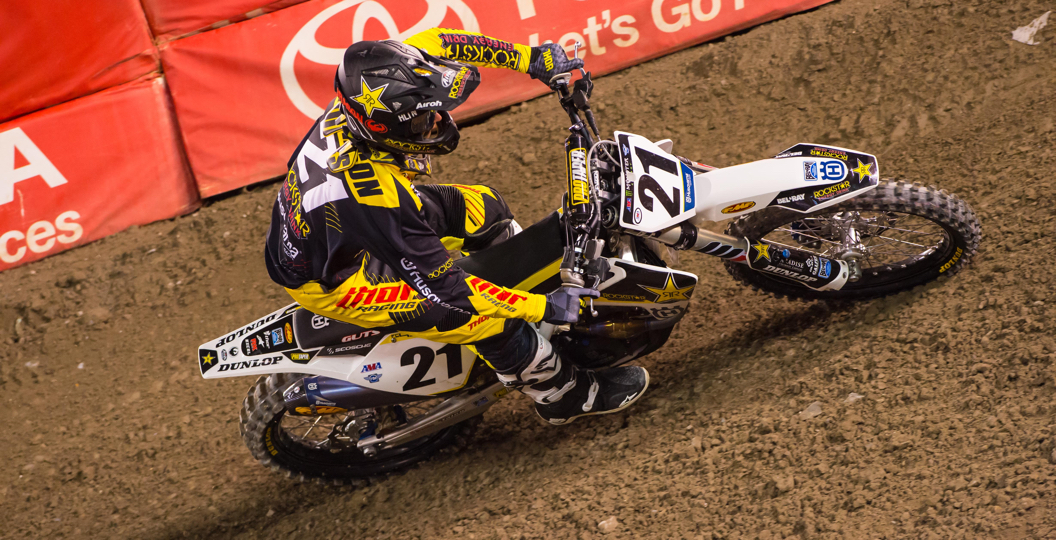 Rockstar Energy Husqvarna Factory Racing’s Jason Anderson overcame a first lap altercation to salvage an impressive top-10 finish at the Toronto Supercross held at the Rogers Centre in Toronto, Ontario. His strong ride maintains his position at third overall in 450 rider point standings. Martin Davalos sat the night out due to personal reasons, while teammate Christophe Pourcel was unable to race due to an injury he suffered this week during practice. He hopes to return next week in Detroit.

Jason Anderson got a fifth-place start in his heat and quickly moved into fourth by the end of the first lap. After battling for a top-three spot for over two laps, he made the move for third with three laps to go. He finished third to transfer to the main. In the main, Anderson pulled a top-10 start before getting caught up in a big pileup in the first rhythm section after running into a downed rider. He remounted in the back of the pack and immediately started putting in a charge. He advanced from 16th to 10th by the halfway mark and eventually finished the race in ninth. His impressive ride maintained his position at third overall in 450 rider point standings.

“I felt like I put myself in a good position,” said Anderson. “My starts have been better. I came out around sixth, but the guy who got the holeshot looped out when I was in the air and I hit his bike. It definitely wasn’t what I was planning, but at the same time I made the best of it. Luckily I’m healthy after that and put in 20 good laps. My whole front end was crooked, but all-in-all it wasn’t the worst time.”