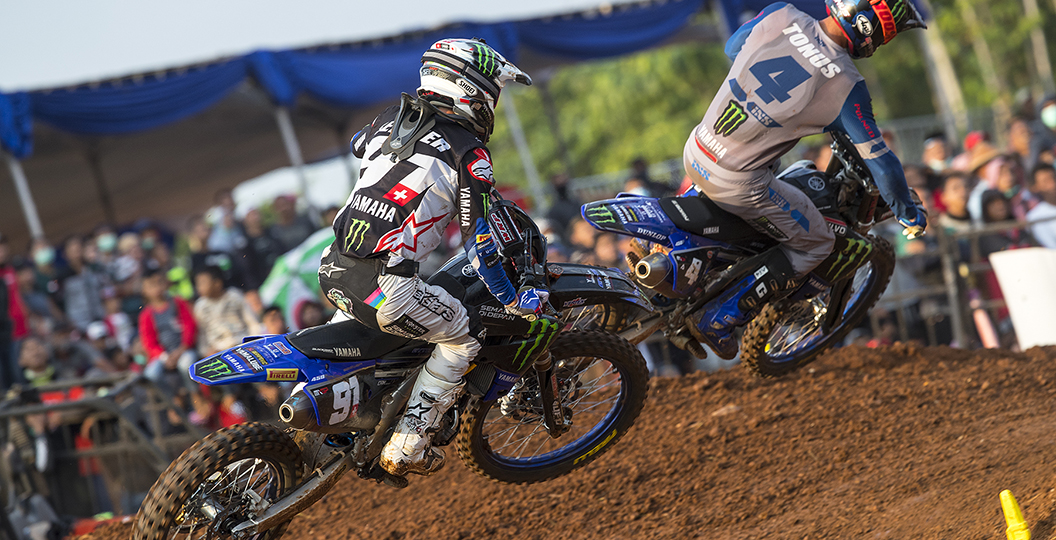 The 2019 FIM Motocross World Championship is well and truly winding down now, as just six events remain on the schedule. It is not exactly surprising that silly-season discussions are present across the paddock and have even wrapped up in some cases. There are still a lot of dominos that need to drop though, so there is plenty to discuss.

Jeremy Seewer is the one who everyone is waiting on. There are rumours that link him to the third seat on the new-look Yamaha factory team or the second spot at HRC. It is likely that a decision will be made in the next week, so the picture could become clearer by the time that the gates drop at the Czech Grand Prix. It seems as though most have just gone ahead and presumed that Seewer will sit alongside Tim Gajser in the future, but that is far from the case. It is very much up in the air at the moment and a firm decision has not been made.

The focus was on Romain Febvre to start with, as his lucrative three-year deal with Monster Energy Yamaha Factory Racing will conclude at the end of the current term. There were rumours about him leaving for the Monster Energy KRT outfit as early as May and, although nothing has been confirmed at this stage, that is happening. It has really been the worst-kept secret within the Grand Prix paddock and his quote about next year at the end of the MX Vice interview in Indonesia was telling. The fact that he is moving on and Seewer is linked to a third seat at Yamaha makes it obvious who will definitely be in blue in 2020.

The second seat at Monster Energy KRT remained a mystery for some time, with different theories from a lot of people in the paddock. It now seems as though Clement Desalle will return, although nothing is concrete currently. It will be interesting to see what way that seat goes. One thing does appear to be clear though: Julien Lieber will not be back. Lieber is not really linked to a team currently, but he would be quite the pick-up for an outfit like Gebben Van Venrooy. Lieber has been stronger than most realise since his move to the premier division.

Calvin Vlaanderen has been present in a lot of silly-season rumours, as he prepares to make a move to the bigger bike, but then he stated after Semarang that he is quite a way from getting something locked down, which is surprising. Vlaanderen would be a valuable hire for any team who wants to look to the future. The old guard will have to move on sooner rather than later. There is no news on what Adam Sterry, yet another MX2 graduate, will do and Henry Jacobi is still a mystery. Jacobi has been linked to a satellite team, although there are a handful of different rumours flying around.

Red Bull KTM are set with their MXGP riders for next year: Antonio Cairoli, Jeffrey Herlings and Jorge Prado will fill the 450F berths for the orange brigade. Yamaha are set with a new-look factory effort, but the second seat at Honda is the greatest mystery. Brian Bogers has been informed that he will not return though. That second position at Kawasaki is causing some to scratch their heads, but smart money would be on Clement Desalle nabbing that. Suzuki will not return in 2020, despite some initial rumours, but all signs point to a comeback in 2021.

Pauls Jonass is locked in over at Rockstar Energy Husqvarna Factory Racing, but Arminas Jasikonis only had a one-year deal with the Kimi Raikkonen-backed squad. One would presume that he will return, as it seems like a great fit from all angles, but it is just surprising that the deal is not finalised yet. The Husqvarna squad has not been linked to any riders and, well, realistically who could they get? Jasikonis said that he has failed to deliver great results to the squad, but then most thought of this as a learning year initially. The potential has been there as well. Are we forgetting about those first four rounds?

Max Anstie is another rider in need of a home, although it sounds like he has more things in the works than he did a year ago. Ivo Monticelli, his teammate, is up too and it is thought that Standing Construct will stick to two riders again, so something is going to change there. Glenn Coldenhoff has twelve months left on his deal still, which one could argue is fortunate considering his mediocre performances thus far. There is no doubt that a lot of riders will be calling Tim Mathys in the coming years, as most will see his squad as the perfect place to land if a factory seat is not obtainable.

Tommy Searle, Shaun Simpson, Brian Bogers, Jeremy Van Horebeek (who will almost certainly return to his privateer Honda awning), Kevin Strijbos, Vsevolod Brylyakov, Brent Van Doninck, Iker Larranaga Olano and more all need deals as well. Those guys must wait for some of the bigger dominoes to drop first though, as that will determine how much of a budget some of the smaller teams have to play with. There are guys like Anthony Rodriguez, who has been considered by multiple squads for the new season, and Valentin Guillod who need to be thrown into the mix as well. Talk about crowded!