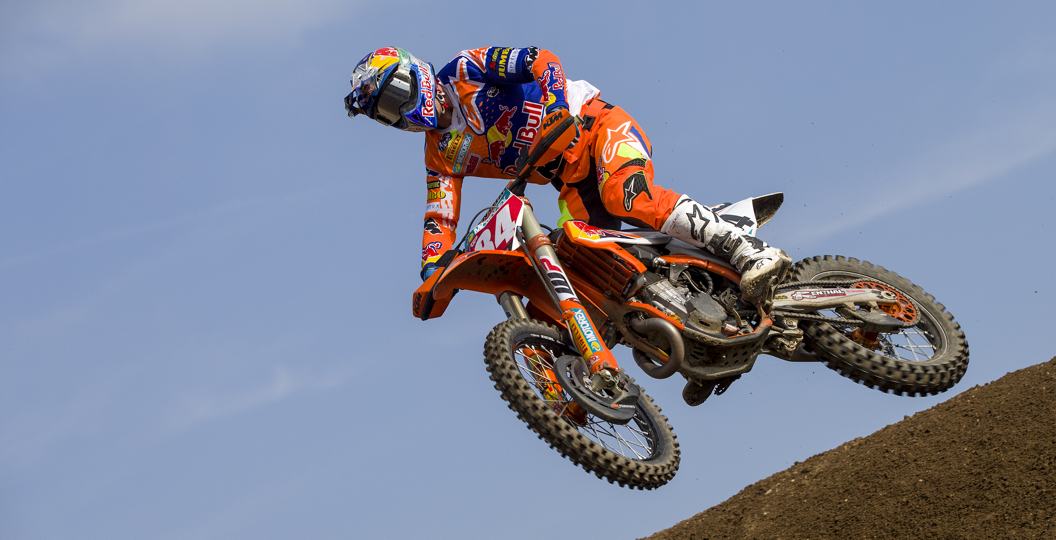 When Antonio Cairoli was extremely dominant in the premier division a couple of years ago, there was not much that could be said about him. Well, with eight rounds in the rear-view mirror in the current campaign, Jeffrey Herlings has reached that point. Teutschenthal did not exactly provide the guys with a lot of options nor did it allow multiple passes. Amazingly though, Herlings was just so much better than the competition that he still managed to build a substantial advantage each time. There was no way that anyone was going to touch him and, most importantly, he is now sat on an advantage of forty-eight points. Who is willing to bet against him?

There was something that Jeffrey Herlings did that was particularly impressive. After crossing the start straight and firing into the penultimate turn, everyone was hitting the bank on the side of the track and doubling in. It was the only way that anyone could actually make the gap. Herlings, on the other hand, was making it happen from the middle of the track, despite the fact that there was no lip to get the lift off of. It was an incredibly technical bit of riding and amazing to watch him set himself up to make it happen each lap, but then he could not really offer up much insight about what it took to do.

Jeffrey Herlings later admitted that he did not even realise that jumping off of the bank was an option. “I actually did not see the line,” Herlings told MX Vice exclusively. “I only saw the line in like end of the second moto, the last few laps, that they went through the bank and then jumped like a double. I went through the middle and I just rolled the first one and then just wheel-tapped some bumps, so I just did not see it. There was not really a lift from the middle, so that is why nobody basically jumped from the middle.” If the line was really that much quicker, imagine the damage that he could have done had he figured that out early on?

To further illustrate just how fast Jeffrey Herlings was, here is a look at his sprint speed in that second moto. The holeshot went to Gautier Paulin, for the second time on the day, but Herlings moved straight into the lead and just threw the hammer down. What did Paulin have to say about the way in which Herlings pulled away and what he saw? “Yeah, he really looks strong and consistent. When he starts to get in his comfort zone then he goes away. I saw him and it was really interesting.”

The Grand Prix of Germany was devastating for Antonio Cairoli. Although that may be a dramatic way of looking at the situation, ending sixth overall was the last thing that he needed. What makes this even worse is that he thought that Teutschenthal could be a turning point in the title battle. The hard-pack surface is not one that necessarily favours Jeffrey Herlings, unlike the sand of Kegums that was tackled last week, but obviously the final results did not reflect that. It is difficult to envision a way that he is going to dig himself out of this hole, as he will certainly require help in one form or another. There is a long way to go though.

It was most surprising just how content Antonio Cairoli was following the race. The main thing that he was concerned about were starts, seeing as that cost him dearly on that track, but then that could be attributed to his poor gate pick. Teutschenthal features a weird start straight actually, as there is a slight kink halfway down that effectively makes it impossible for a rider in the middle of the gate to have any kind of impact. Why is it built like that? If the gates were placed at an angle, so that there is a straight line heading into the first turn, there would not be room for the guys to run back across the start straight.

It is not like the start straight was too much of a concern, because most of the comments revolved around the poor track conditions. There was a lack of lines on Saturday, which prompted some guys to suggest that it should be ripped and watered overnight. There was still just one good line in the races though, for the most part anyway, hence why there were very few passes. Thomas Covington was the only guy who made significant progress each time, but that was just because he had some awful luck that left him at the back of the pack. A lot of the riders simply stated that the track was boring.

There is no doubt that a lot of the frustration stems from the fact that this is not the first time that there have been concerns about the conditions at Teutschenthal. In the past it had been because the hard-pack layout had deteriorated so much, so it is not exactly the same thing, but the fact is there always seems to be some issues. There were further frustrations in the paddock as poor WiFi caused a lot of industry personnel to struggle with their weekly tasks. All of that just slips into the background when thirty-thousand fans pile into the facility though, as that acts as a great reminder of just how popular this event is.

The MX2 class did not really progress too much at the Grand Prix of Germany, as the gap between Pauls Jonass and Jorge Prado has not changed at all. Twenty-two points should not be too much of a concern for the latter though, especially considering he may have a speed advantage at this point. It seemed as though, if anything, Prado was just ecstatic to conquer Teutschenthal, as the track has not been kind to him in the past. Eighth overall was the position that he secured in the EMX class two years ago and then similar moto scores left him in eleventh last season. This was certainly quite the turnaround.

The fact that the track was difficult to pass on was highlighted in the MX2 division, as the results were not a true reflection of what went on. Jorge Prado was quick enough to win the first moto, most would agree, but just had nowhere to make a move. Although some felt that he should have been more aggressive with his title rival, he later admitted that he has never made a block pass in his life and does not ride that way. It would not have been wise to try a dirty pass when the stakes are so high anyway, especially considering that the pair have been getting on rather well this year. There have certainly been less complaints than last season!

One would presume that the title fight between Pauls Jonass and Jorge Prado will ramp up at Matterley Basin, as there will be a few more guys who can get between the pair. Hunter Lawrence will be back and finally close to fulfilling his potential, which he has not been at all this year, and Darian Sanayei expects to jump right into the mix too. Thomas Covington should continue to improve and be much closer to the front as well, so there are riders who just want to win races and have the ability to steal points from the title favourites. The twenty-two-point advantage that Pauls Jonass is currently sat on suddenly seems quite small.

The Kemea Yamaha duo are capable of mixing things up too, but that is just considered normal. One could argue that Hans Corver and Marnicq Bervoets are not actually getting enough credit for the moves they made through the off-season. It was a gamble to pick Ben Watson and Jago Geerts up, but they were willing to work towards their long-term goal and give these guys time to learn with support from a factory team. Now, following the first eight rounds, both guys have exceeded expectations and will undoubtedly win races in the not-so-distant future. Kemea Yamaha can reap the benefits of that success, simply because they were willing to roll the dice and give those guys a chance.

Anthony Rodriguez could also end up handing the Kemea Yamaha outfit some solid results, although the process may take a little longer than initially expected. Eyebrows were raised when Rodriguez, who entered the top ten during his fill-in stint with HRC last season, was last in practice and then thirty-second in the timed session, but he made some drastic improvements in the motos. What is his ceiling? A top-five finish is certainly possible, but he should be able to slot in between fifth and tenth in the coming weeks. The fact that there are some hard-pack tracks coming up will help him climb up the pecking order as well.