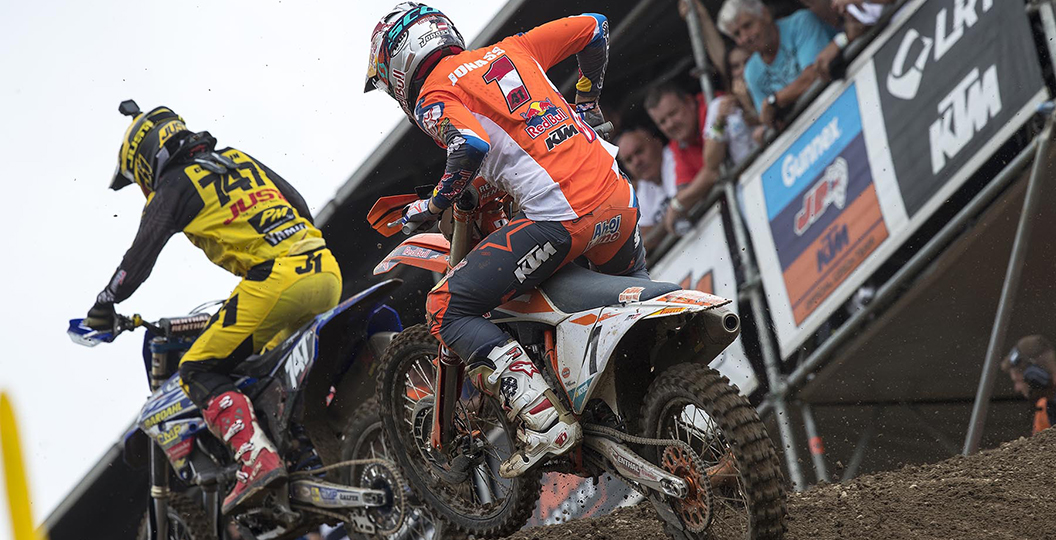 The Grand Prix of Czech Republic was an exciting affair for a few different reasons. Everything continued to trend in the direction that most anticipated, so the results were not exactly much of a shock, but the current FIM Motocross World Championship continues to boast a gripping narrative. Gone are the days of the respective title fights being well and truly over before the final stretch has even been reached.

It is so odd that the MX2 class is occupying the minds of most fans around the world, especially after the Jeffrey Herlings and Antonio Cairoli duel has dominated headlines for so long. The fight between those two is still raging on, as the difference is just thirty points, but naturally eyes have begun to drift across to their younger teammates. Jorge Prado finally tore the red plate from Pauls Jonass, after working towards that goal for many months, and established himself as the favourite to win the championship. Is this the end of the fight or has a new chapter only just begun?

It is understandably difficult for some to picture a scenario in which Pauls Jonass will be able to retaliate, as Jorge Prado had to overcome such a substantial deficit to get to this point. If he does end up winning this championship, which it seems he will, it may be one of the most unlikely triumphs. Although there is no denying his speed and potential, a broken elbow in the off-season left him with minimal prep time. Prado got back on a bike just two weeks before the opening round in Argentina! The opening event then did not go to plan, as he left the spectacular venue of Neuquen with nineteen points and a thirty-one-point deficit.

The rapid improvement that he made through the following rounds was clear to see and, as he continues to go from strength to strength, there is no doubt that he holds all of the cards. Who would have predicted that back in March, when Pauls Jonass polished off a six-moto win streak through rounds one to three? A closer look at those results may ease the shock factor though. Four of those six wins occurred with gaps of five seconds or less, which is far from dominant and perhaps indicates that things could have changed. Jonass also led at the end of lap one in five of those races and was often caught from behind by the end.

The triumphs gave the impression that Pauls Jonass was unbeatable. The good starts then became less frequent and now, fourteen rounds in, it is clear how important those are. There are greater problems at play, as he was comfortably sat in third on Sunday and went backwards, but that way of analysing the first three rounds makes this less surprising. It is likely that it will never become apparent why he is struggling so much currently, but it seems as though a part of that issue is mental. Jonass looked fired up on Sunday and was pushing the leaders, as he has done so many times, but that aggression soon evaporated. The stance that he had in turns was suddenly more upright and relaxed and then positions were soon lost.

Pauls Jonass has understandably opted to leave events immediately after the final race lately, when he has not had to stick around for press conferences anyway, so that has stopped more details coming to light. It was mentioned many times that he could not practice at all last year, because of the impact that the concussion that he sustained at Loket two years ago had on his brain. Jonass took some time off in October and November last year, then started riding again and everything felt fine. Is there a chance now, however, that some issues have resurfaced and are stopping him from truly giving it his all? Another intriguing element that lends itself to that point is that speed in practice is certainly not an issue.

Battles in the MX2 class developed in many ways at the Czech MXGP, funnily enough, as the battle for third actually tightened up. Ben Watson now faces a greater deficit to Thomas Kjer Olsen, following a scary crash in moto two, but Calvin Vlaanderen has put himself in that fight. Forty points is the difference between third and fifth and, in this particular field, that is just nothing. It would be quite the story if Vlaanderen ends up blowing through that deficit to claim the bronze medal, as he was not any radars when the current term fired into life. A virus that hindered him through the first two months of the campaign did not help things.

It is actually interesting if you break down the results from the last seven rounds, so from Teutschenthal on, because it offers a clear look at current form. The points that the top-six riders have acquired since that round are outlined in the table below.

In more Calvin Vlaanderen-related news, it seems increasingly likely that he will be on the Dutch squad at the Motocross of Nations. It is not confirmed, obviously, but chatter in the paddock at Loket indicates that the team will consist of Jeffrey Herlings, Calvin Vlaanderen and Glenn Coldenhoff. Although most point to the latter as the weak spot and one that will stop the team challenging for the win, he will be just fine. The individual classes at the Motocross of Nations are not as deep as they typically are, seeing as everyone is split up, so he would do enough to back up the results that his teammates post. Herlings should win his class, especially if he goes into a different category to Eli Tomac, then Vlaanderen could also win MX2. It would be a great team.

Speaking of Herlings, now is as good a time as any to discuss his dominance. The hardest thing is continuing to find ways to describe what he is doing. Everything is moving along nicely at this point and arguably the most interesting thing to follow is whether or not he manages to win the championship at his home event in Assen. The Dutch Grand Prix is the penultimate round and, with that in mind, he would have to lead by fifty points by the end of that event. If he continues to sweep both motos at each round, which is likely, then it will happen quite easily. It is utterly insane to think that his gap would be pushing one hundred points now, had he not got injured.

Antonio Cairoli is going to struggle with his injury at Lommel at the very least and it may even extend further than that. It is far from ideal, especially considering that Jeffrey Herlings is going to be so good at Lommel, but those are the cards that he has been dealt. Is it not surprising that guys like Clement Desalle, Tim Gajser and Romain Febvre cannot take advantage of this and steal a win? There was a very slim window of opportunity, which has closed now that Herlings is inching closer to his true form, that no one could capitalise on. It puts more of a spotlight on how large the gulf between the Red Bull KTM duo and the rest is when everyone is healthy.

Jeremy Van Horebeek split that group at the Czech event in what was a solid, but not spectacular, ride. This is a very important time for him, as he will not return to the Monster Energy Yamaha Factory Racing awning next year. Van Horebeek was chasing a seat on Standing Construct KTM, as mentioned previously, but it seems as though he was going for the same spot as Glenn Coldenhoff. It sounds like sitting alongside him is just not going to be an option. Where will he go from here? Wilvo Yamaha MXGP have a seat free and, considering the lengthy relationship that he has had with the Japanese manufacturer, it is surprising that he has not been linked to that squad.

Presuming that is also not an option, where does Jeremy Van Horebeek go from here? Van Horebeek has candidly said that he will hang up the boots, even though he does not want to, if the right opportunity does not present itself. A rider like Evgeny Bobryshev, who was in this exact position twelve months ago, was happy to bet on himself and head to an unproven outfit like BOS GP, where struggles were bound to be encountered. It is going to be interesting to see if Van Horebeek will be happy to do the same. There is no doubt that he has a lot more to give at twenty-eight-years old, but a factory-supported ride seems unlikely at this stage.

It is crazy to think that Gautier Paulin, Max Anstie, Shaun Simpson, Kevin Strijbos, Valentin Guillod, Evgeny Bobryshev and Tommy Searle are also on the market and looking for a home. In addition, guys like Todd Waters and Anthony Rodriguez are hoping to make something work that will allow them to stay in the FIM Motocross World Championship. There is a lot at stake for many guys, even those who do not have much to fight for in the points, so the final six rounds will be intriguing.