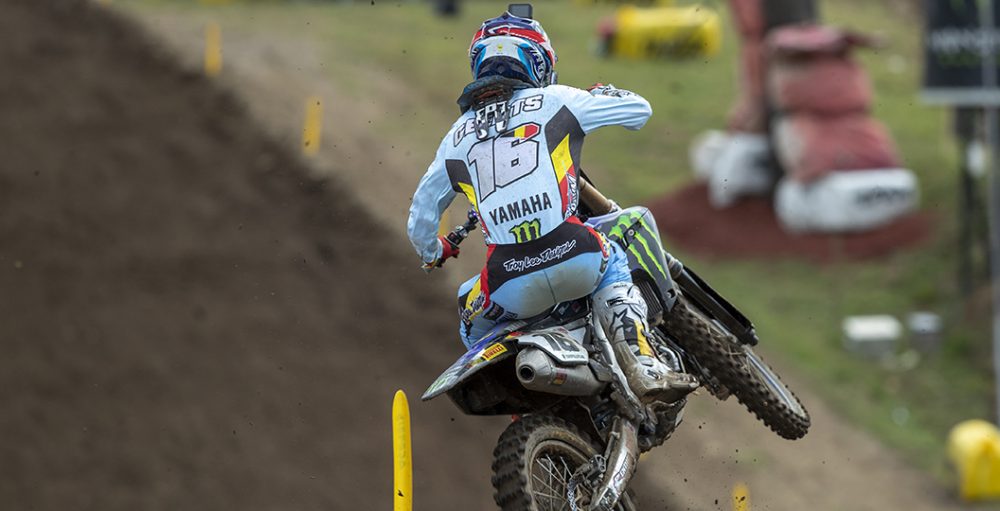 2023 looms large for Jago Geerts, as the time is now for him to win that elusive MX2 world title before moving to MXGP in 2024.

Having come so close to claiming MX2 glory last year, with the championship being decided in the last moto of the season in Turkiye, the Belgian will be eager to not suffer such disappointment this time around.

While the circumstances surrounding him falling at the final hurdle were nothing short of devastating, where he ran into eventual champion, Tom Vialle, after the Frenchman crashed right in front of him, it was, however, positive to see him shine shortly after this setback at the Motocross of Nations.

“Honestly, I’m very disappointed,” lamented a dejected Geerts. “I really can’t believe my luck. I felt good on the track today and gave everything. In the first race I missed the start a little bit and then had a little crash, but still finished second. In the second race, I was just really unlucky with Tom crashing right in front of me and I could not avoid his bike. It cost me a lot of time, and then I had to push so hard to come back that I fell again, and from there it was game-over.”

Stepping onto a 450 to ride in the MXGP class, this served as a welcome distraction to recalibrate his focus, as he rode exceptionally on the big stage at RedBud. Adapting superbly to the bigger bike and looking right at home battling with some of the best in the world, Geerts emphatically held his own in the showpiece, with the highlights being his outstanding qualifying race victory and his second in race one, where he strikingly clocked the fastest lap time.

Finishing fifth overall by virtue of going 2-11 in his class behind only bonafide stars Maxime Renaux, Eli Tomac, Jeremy Seewer and Jorge Prado, there was no denying his speed and ability, for he appeared extremely comfortable throughout the weekend.

“Overall, I am happy about the weekend. It was really fun on the 450. Winning the qualifying heat yesterday was unreal, a little bit unexpected, but really nice,” he reflected on his 450 debut. “In the first race, I took the holeshot but made a small mistake, which let Tomac past me. I was able to follow Tomac for the whole race, so that was pretty good. I was happy with that. In the second race, I had a good start but crashed twice on the first lap and only got back to 10th. I am still happy with my riding and my first race on the 450, it was just a fun weekend.”

As a result, many questioned whether it was best for him to bother spending another year in MX2, as he clearly demonstrated he has what it takes to mix it at the elite level. But seeing as the decision was already made and there is no space available at Monster Energy Factory Yamaha MXGP until 2024, another year in MX2 will nonetheless give him the opportunity to finally claim that coveted title he so dearly craves.

It won’t be easy for him, though, for the class will be littered with talented riders doing everything in their power to make the crown theirs. Set to be pushed hard by the likes of teammate Thibault Benistant, Kay de Wolf, Simon Langenfelder, Roan van de Moosdijk, Kevin Horgmo, Mikkel Haarup, Liam Everts, Andrea Adamo and the Coenen brothers, he certainly won’t have it all his own way.

There’s no doubting he enters the crusade as the favourite, however, for he’s not only proven what a gifted operator he is over the years but also been a legitimate contender for the last few seasons – even though things ultimately haven’t entirely gone to plan due to a plethora of untimely errors and crashes.

Despite not getting the job done last term, an uptick in consistency was definitely evident, for he kept it on two wheels far more frequently than in previous years, which was underlined by the fact he only came up short by four points in the final standings.

Moreover, his accomplished 2022 campaign also saw him secure 12 individual moto wins, six overall victories and 16 overall podiums. Not bad at all, but still not enough to secure his maiden MX2 title.

Upon looking back at his efforts dating back to 2019, where he came third in the standings before rattling of three consecutive second places, it’s interesting to note he’s only ended the season within 100 points of the series winner once prior to this campaign – back in 2020 when Vialle ousted him by 80 points.

Diving deeper into his numbers since he entered the MX2 paddock in 2017, and his record of winning 16 grand prix overalls, bagging 33 moto wins and claiming 43 overall podiums from his 91 GPs highlights what a class act he’s been.

Maturing with every passing year and ready to finally take home the MX2 trophy, Geerts is primed to become the first Belgian since Steve Ramon in 2007 to reign triumphant in the top classes.

“It would be really good to have a world champion in Belgium again because motocross is not so popular anymore and a lot of tracks are closing. My home motocross track also needed to close because of the sound, so motocross is not doing so great at the moment here in Belgium,” he explained in an interview with Monster Energy.

“Maybe we can have a couple really good GP riders again and also have a world champion and things can change a little bit. Maybe the sport can become more popular and more people want to practice motocross again and we can end up having some more new tracks.”

Possessing all the ingredients to achieve his goal in his final year in MX2, the tremendously skilful and fast pilot will be doing all he can to avoid a repeat of 2022.

Having had plenty of time to process that heartbreaking finale and fully aware of what he needs to do to turn his dreams into a reality, Geerts will be eager to banish the demons of 2022 to ensure 2023 is a year that ends with him sitting on top of the world.