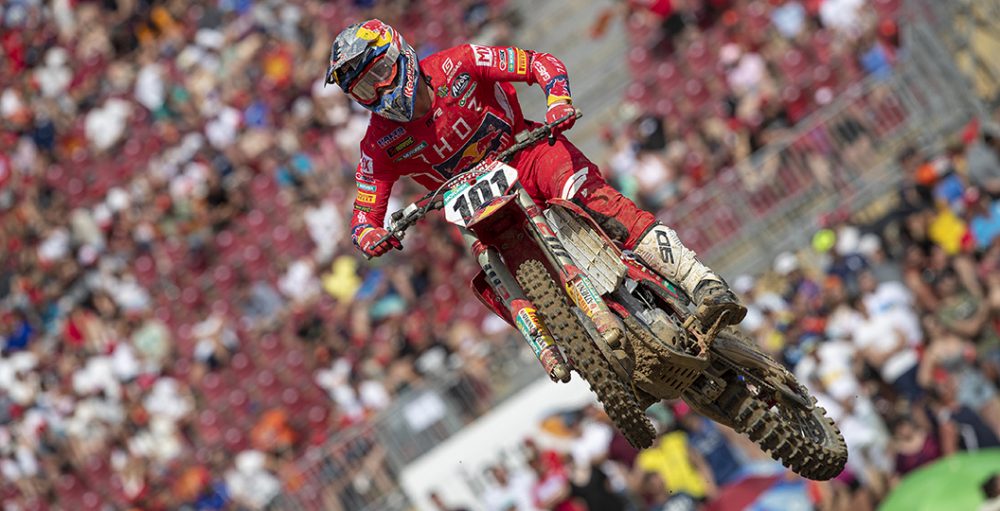 Analysis: Guadagnini ready for a full assault on MXGP in 2023

Although Mattia Guadagnini couldn’t replicate the highs associated with his exceptional 2021 season last campaign, 2022 still provided him with a valuable learning experience that will unquestionably hold him in good stead for the future.

Having enjoyed a brilliant debut MX2 crusade, Guadagnini really caught the eye early, as he hit the ground running impressively. Taking just four gatedrops to secure his first moto victory on his way to claiming second overall at round two in Matterley Basin, he then backed that up in scintillating style by winning his first overall an his home GP at Maggiora courtesy of his 2-1 finishes.

Strikingly holding the red plate just three rounds into his first MX2 crusade, this underlined what a special talent the Italian is, for he adapted smoothly to the step up in class, just like the former Junior World Champion,  EMX125 Champion and EMX250 runner-up had done when moving up in previous years.

Despite him not being able to maintain this incredible run throughout the season, the fact he secured another overall by triumphing at Loket and banked three more overall podiums served as a testament to his quality.

While it must be said, his form tailed off towards the end of what was a grueling first campaign at the MX2 level, he still did enough to secure fourth in the final standings behind only Maxime Renaux, Jago Geerts and Tom Vialle.

Further upside from his overwhelmingly positive breakthrough term could be found from him playing a massive role in helping propel Team Italy to a memorable Motocross of Nations triumph on home soil alongside Antonio Cairoli and Alessandro Lupino, where his 2-2 class scores were instrumental towards the win.

Coming on in leaps and bounds and relishing working under the De Carli Red Bull KTM Factory awning with Cairoli and Jorge Prado, 2021 was a year to remember for the young hotshot.

Switching to the Red Bull GasGas Factory outfit for 2022, which was ostensibly the same structure as in the previous year, expectations were high that he’d be a legitimate title contender and carry his momentum into the new campaign. But things didn’t go to plan at all for the #101, for he performed well below his capabilities and struggled to stamp his mark in MX2.

Unable to recapture his form, it was strange to him battling for top fives as opposed to fighting for wins and podiums like he was accustomed to. After seven rounds and with him only managing to muster two top five overalls and no moto podiums, the decision was made for him to move up to MXGP for the remainder of the season. Enduring severe issues with his starts and just generally having a hard time piecing everything together, it made sense for the bigger framed pilot to switch to the more powerful bike.

“I had great expectations for this season. I prepared very well with the team, but things in the races have gone wrong too many times. I have made mistakes and also had some bad luck. We are not yet halfway through the season, but realistically it is very difficult to achieve the goals that I had set for myself,” explained Guadagnini.

“I thought that it would be more logical to look forward and prepare for next season, especially as I have so many rounds to adapt to the MC 450F. I talked about it with De Carli and the team, and perhaps this change will be positive for everyone. I thank the team and management for this opportunity.”

Team boss Claudio De Carli then added his thoughts: “Between mistakes and unlucky episodes, Mattia is going through a difficult period. We all know his talent – he can return to doing very well and is still in the top ten in MX2.

“Mattia always works with great commitment and is a mature, determined, professional and very fast rider. We talked about it, for his interest, and among the various possibilities he himself decided to move to the MXGP category. This transition was planned for next season, but we are all convinced that it is a good solution to make the move immediately. In MXGP he will not have to worry about the results. There are thirteen rounds to race, in which he can become familiar with the 450 and thus prepare himself as best as possible for 2023.”

Taking the rarely trodden path to change to the 450 class full-time during the season despite having many years of MX2 eligibility left, all eyes were on him to see how he’d fare. 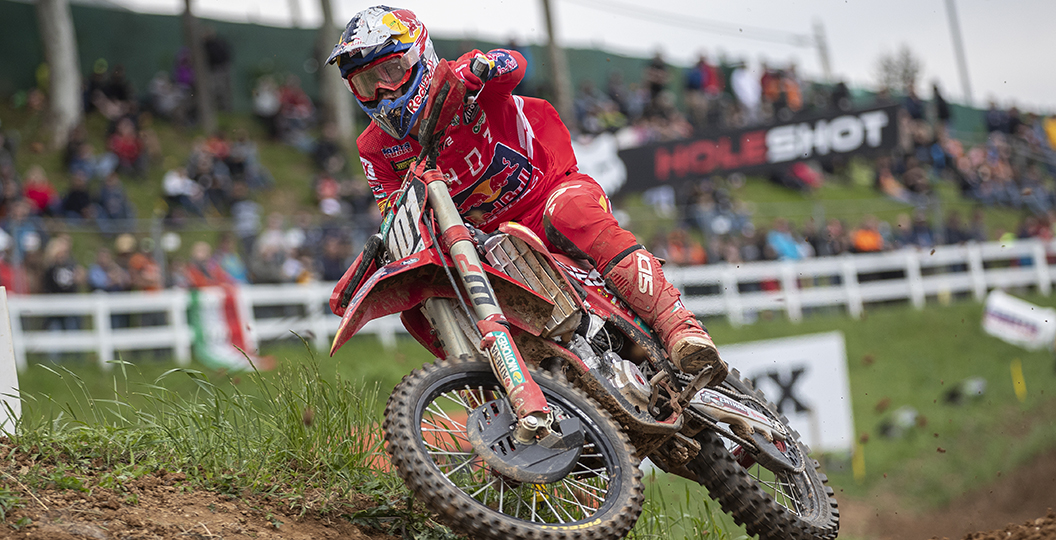 Immediately finding his rhythm on his MXGP debut and looking surprisingly comfortable aboard the 450, he cruised to an admirable eighth overall in the brutal deep sand at Sardegna.

Heading to Spain for the following stop on the calendar, the signs were promising that the decision to fast track him into MXGP would be a roaring success. Going 8-5 for sixth overall, it was a weekend littered with upside for the Italian, with him taking a huge step forward in terms of building confidence and feeling more at ease duking it out in the stacked class.

“I am really, really happy about how things are going now. This event started really well for me. Finishing fourth in the qualifying race was really good motivation – it gave me some confidence. I think that I could have got a similar result in the second race, because I was feeling really good, but I did not want to make a mistake. Finishing top five in MXGP after just two races is really, really good. I am so happy about how I feel on my MC 450F,” he gleamed in his post-race comments.

His progress was disappointingly halted at Ernee, however, for a nasty crash in free practice on Saturday forced him to miss the raceday.

Back in action in Germany, sixth in the opening moto at Teutschenthal was another indication that he was finding his groove nicely in the premier class. Disappointingly, in the second moto, a first lap spill ensured he had to fight his way through the field, as he eventually claimed 19th, thus giving him 12th overall on the day.

Showing some solid consistency, Guadagnini then banked three consecutive eighth place finishes in Indonesia and at the first moto in Loket respectively, before registering 11th in the second moto in the Czech Republic.

Another eighth in the first moto at Lommel illustrated how coherently he was adjusting to life in MXGP and how he was handling himself competently on a variety of surfaces. But a 16th in the second race would be the start of a tough spell, as a combination of average starts, untimely errors and misfortune scuppered his results.

Enduring rounds to forget in Sweden, Finland and at St. Jean d’Angely, where he couldn’t make his way into the top 10, he ventured to Turkiye for the finale ready to end the campaign on a high.

That’s precisely what he did, for the 20-year-old showed podium speed, with him producing his finest ride yet. Claiming an outstanding fourth in moto one and fifth in moto two, there was much to admire about his polished day at the office. Mixing it with the frontrunners and relishing the hard pack conditions, the GasGas starlet hit his straps to punctuate his immense talent.

“It was great, I’m really, really happy to end the season in a good way to be motivated for next year. It wasn’t really easy the last few races because I was struggling and also mentally I was not confident anymore so I wanted to reset – to start again,” he told Lewis Phillips in his Fly Racing post race podcast from Turkiye.

“I trained a little bit differently this week, but not really too different, just trying to have more fun. I also had fun today. I was riding more like myself, (with) no pressure. Got two good starts even if I was a little bit outside due to the qualifying crash of yesterday. There were a few races where I was not enjoying it and today, yes, I’m really, really happy. The most important thing is that I enjoyed riding today, which is important for the Nations. I’m happy to finish like this, as I was really hoping I’d finish like this as the last few races had been sad.

“I think I’ve learned a lot this year in just my second season in the World Championship. I’m still gaining an understanding about myself, how I’m feeling during the championship. I’m still learning a lot. For sure next year I will change something, for sure I don’t want to make the same mistakes another year, as I didn’t really enjoy my racing at one point during the year.

The hugely popular and charismatic pilot then instantly turned his attention to the MXON at RedBud, where Team Italy headed in as the defending champions. Mixing the ups with the downs on the big stage, the undisputed highlight was his breathtaking opening moto, where he scorched out to an early lead before holding first for almost half the race. Engaging in a captivating duel with Chase Sexton, many heads were turned with his aggressive, entertaining display that ended in a fantastic third.

Ultimately going on to claim sixth overall in his class behind only world class operators Jett Lawrence, Sexton, Dylan Ferrandis, Ruben Fernandez and Calvin Vlaanderen after falling in the second stanza to only get 19th, much encouragement could be extracted from his efforts at the showpiece.

Armed with a recalibrated approach, knowing what he needs to do to perform at his best and having importantly already gained 10 vital rounds of MXGP experience, plus the MXON, aboard a 450, Guadagnini’s primed for a full-time assault on the elite class next year.

With still so much scope for improvement, able to enjoy a full preseason and still only 20, the future certainly looks bright for the gifted rider, who’ll be ready to come out firing at the 2023 season opener in Argentina come March.