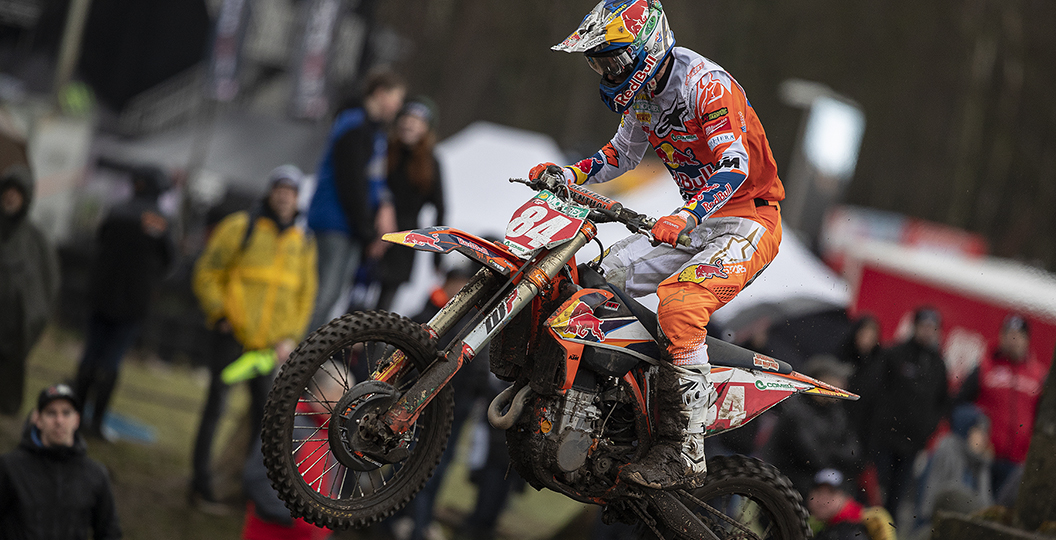 The 2020 FIM Motocross World Championship is going to pick up at some point. Weirdly, the fact that the season is already underway has been forgotten about by most. How much talk do you really hear about what has occurred on the world stage at the first two rounds? Exactly. Seeing as everyone is on standby currently, it seems like a great time to reflect and look at what has actually gone on and where things could potentially go in the future. The top thirteen in the premier-class points are broken down below.

Jeffrey Herlings (94 points): Jeffrey Herlings is leading the points in the premier class. There is not much to see here, right? It’s what most thought would happen. It is not like we have seen the best Jeffrey Herlings yet though – he has even admitted that. This could be worrying for his rivals, of course, as he has taken the first two victories and will seemingly only get better. If a rider is looking at this with a glass half full outlook though, they can take comfort in the fact that they are closer than they have been in the past.

Tim Gajser (85 points): That eighth in the first race of the season is really having an impact on the way the premier class is being looked at. Had he not fallen at the start of that race, would he have ended second or even first and then also have possession of the red plate? Imagine if he was tied on points with Herlings at the moment – that would make this enforced break even more excruciating! Anyway, Gajser is riding better than ever at the moment and that is really not up for debate. #243 has been that good.

Antonio Cairoli (68 points): Is this the best start that Antonio Cairoli has had to a Grand Prix term? Not at all, but it is by no means a disaster. Cairoli has weathered the storm with a torn PCL and will be stronger in a month or two. Salvaging good points was the priority and, well, mission accomplished. There is not much to say here, other than watch this space. It will soon become clear just how good he is when at one hundred percent and where that puts him compared to the two most recent world champions.

Clement Desalle (60 points): Clement Desalle has arguably been one of the most impressive riders through the first two events, even though he has really done what he typically does each year. Desalle stock was at an all-time low heading into the season opener and clearly that was unjustified. There are a few guys eyeing up that second KRT bike, thinking that Desalle is on his way out, but that could be further off than predicted. It will be interesting to see whether he maintains this level through the rest of the year.

Gautier Paulin (58 points): Copy everything that was said about Desalle and put it here, as the same applies to Gautier Paulin. Was he written off going into round one? Yeah, for the most part. Has he already silenced those claims? Sure. There is a theory amongst some powerful people that he turns it up when it is a contract year and, well, it is thought that his Yamaha deal is up at the end of the current term. Maybe he will continue in this fashion?

Glenn Coldenhoff (56 points): This is not bad. This is just what Glenn Coldenhoff does, but the expectations that sit on his shoulders have skyrocketed in the last nine months. If Coldenhoff can continue in this fashion in a field that consists of healthy stars, then that is good. Perhaps he will turn it on at the end again and be a regular on the podium? That is just what he does, yet again. This is actually the best start that he has ever had to a premier-class term – his previous best was 55 points after two rounds in 2018.

Arminas Jasikonis (53 points): This is a good way to look at how Arminas Jasikonis has begun the campaign. Jeffrey Herlings, Antonio Cairoli, Tim Gajser and Arminas Jasikonis are the only four riders who have jumped up onto the overall podium so far. That makes you realise the elite level that #27 has hit, which is something that seems to get overlooked. It is imperative that he hammers that point home in the coming months, as it is a contract year and Thomas Kjer Olsen is hunting for a premier-class ride.

Jorge Prado (47 points): Jorge Prado currently trails Jeffrey Herlings by 47 points, which is important. There is absolutely no way that anyone could rule him out of the fight for this title. Prado should come out at the next round of the 2020 FIM Motocross World Championship and jump right into the fight for wins – the speed has already been clear for all to see. Could he not then end up in a position to fight for a red plate if things start to fall in his direction? It would not take much. Watch this space.

Jeremy Seewer (42 points): Jeremy Seewer was extremely pissed off after Valkenswaard, but we will focus on the positives here. Seewer made quite the statement at Matterley – he proved that finishing second in the points a year ago was no fluke and that he may even be a better rider now. This ranking does not reflect that, but it will be interesting to see how he does when racing starts up again. There is a sense that the sky is the limit. Will he win countless Grands Prix in a row? It is unlikely. Would it be surprising though?

Jeremy Van Horebeek (39 points): This has got nothing to do with the FIM Motocross World Championship that is running currently, but who actually remembers that Jeremy Van Horebeek rode for Monster Energy KRT in 2013? Does it not seem as though that stint has been completely forgotten about by most? Anyway, Van Horebeek has become the forgotten man in Grands Prix. That Valkenswaard ride proves that he has a lot more to give though. Who even knows or remembers that he was fifth overall?

Mitch Evans (34 points): Eleventh in the points with just one round completed is quite impressive. HRC will present him with a contract for the years to come soon enough, right? The way that he performed at round one should quell any doubts – one would think that would be the case anyway. Evans has to go down as a potential race winner based on that round, and the dislocated shoulder will not be a problem now that he has sufficient time to recover. It sounds like that injury is already feeling pretty good.

Shaun Simpson (31 points): This is the first time since 2014 that there has not been a British guy in the top ten in the premier-class points after two events. Shaun Simpson would be comfortably in there though, had he not crashed in moto one at the Grand Prix of The Netherlands. I feel like Simpson is not really getting the credit that he deserves for running his own operation, and the only reason that I can come up with is it looks a lot like the set-up that he had with RFX a year ago. Weird, huh?

Pauls Jonass (26 points): Pauls Jonass wins the award for most crashes through the first two races, but the good news is that he is in one piece and got points on the table. It seems like he has more raw speed than he did a year ago, which is a good thing. That should all work out eventually and he may make more of a splash than anyone expects. This is the thing though: The current term is so young that nothing has been deemed impossible. There is not enough evidence yet for something to be thrown off the table completely.