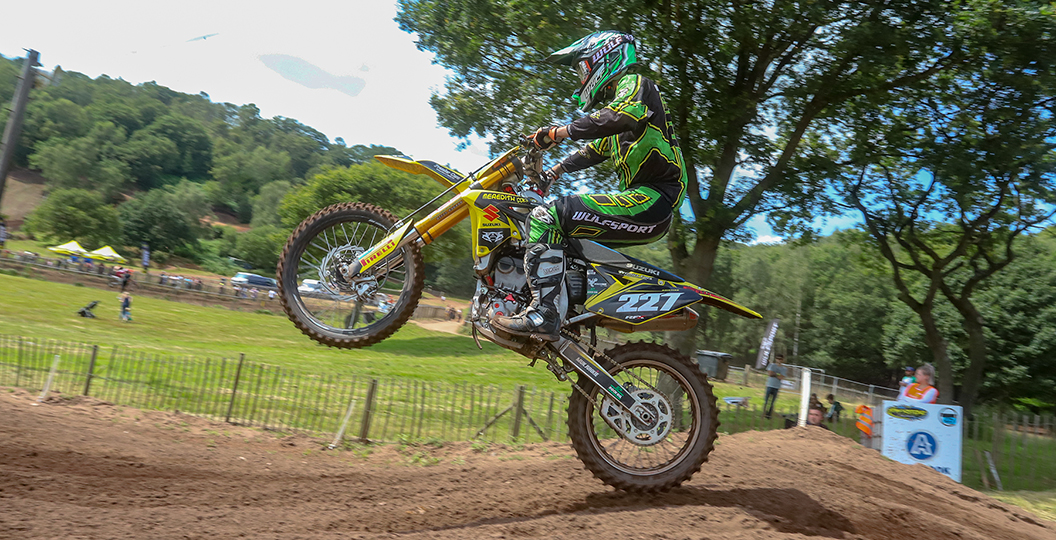 At a hot and gnarly round seven of this year’s AMCA championship staged Hawkstone Park last Sunday Luke Burton showed that his well on the road to recovery from his cracked vertebra by winning the MX1’s overall.

But while Burton was doing his thing in the MX1’s James Wainwright was winning the MX2’s. He made things hard for himself in the first race, with a come from behind second-place but backed that up by winning the next two races after some epic battles with Kristian Whatley.

After Saturday’s club, event track workers worked late into the night making the well-watered track as smooth as a snooker table ready for Sunday’s five championship classes. But we all know Hawkstone and, after qualifying, it was back to its sandy, bumpy, power-sapping self.

James Dodd leads the pack into turn one at the start of the fist MX1 championship race from Gary Gibson, Burton and Josh Waterman with, the series leader at the time, Neville Bradshaw in sixth place. Gibson snatched the lead from Dodd on lap two, with Burton following him through to second a lap later. It all went wrong for Gibson on lap four as a crash would see him drop to seventh place as he handed the lead and his first win of the day to Burton. Bradshaw was in second at the halfway point but a slip up put him back to fourth, which was where he finished. Shane Carless was down in ninth at the end of the opening lap but steadily made his way up the leader board to second place with Dodd hanging onto third.

Gibson got the holeshot at the start of the second race from Burton, Dodd, Bradshaw and Carless, but by the end of the first lap, Burton was in the lead and on his way to his second win of the day. Carless didn’t make the Burton win easy though as the tough, flying Welshman followed the experienced Bradshaw through the pack with the pair slotting into second and third on lap five. A lap later, Carless was in second and from that point on he closed on the leader. Burton ran out of laps as the pair crossed the finish line separated by just over two and a half seconds. Another lap and it may have been a different story. Bradshaw was a distant third with Dodd, Gibson and Waterman all spaced out in fourth, fifth and sixth.

Dodd got the holeshot at the start of the third and final MX1 race and held onto it for a couple of laps until Carless stole it from him and went on to win. Burton was sixth at the start but fought through to second by the halfway stage with Bradshaw after an up and down sort of race third. Dodd hung onto fourth with Gibson fifth. Overall, it was Burton by six points from Carless, Bradshaw, Dodd, Gibson and Waterman but in the championship Carless now has a fifteen-point lead over Bradshaw who now has Dodd and Gibson a race win behind him.

“I had a bit of a quick return to racing,” said a happy overall winner Burton, “After cracking a C6 and 7 earlier in the year I wasn’t expecting to do as well as I have. It’s just that I haven’t had the race time to get back to full fitness that I had pre-season. I am definitely on the right track, but it’s taking a long time to feel comfortable on the bike. The boys have definitely upped their pace this year, so this win is very special.”

From second on the podium, Carless said, “Second overall is good for the championship, but I am feeling a little bit disappointed as I felt like I should have won every race. Luke [Burton] was riding very well. As the track got rougher the faster I got and that’s very unusual for me, but with second overall the team is happy and the team boss is happy. Everyone’s happy.”

The opening MX2 race was the best race of the day as the crowd watched Wainwright after a lousy start close down and almost pass the early leader, Corie Southwood. Southwood led from the drop of the start gate from Jaydon Murphy, Jason Day, Ryan Crowder and Whatley with Wainwright in seventh as the passed the timing loop for the first time in the nine-lap race. By the end of the first lap, Whatley was in second place and it looked like Southwood had already opened up a sizeable lead that looked unbeatable. By the end of the second lap, however, Wainwright was already in Whatley’s wheel track and looking for a place to pass.

In the end, Whatley gifted the place to Wainwright as he slipped off in one of the fast-banked turns out the back of the track. For the rest of the lap, all eyes were on the gap between the two leaders as it got smaller and smaller as inch by inch Wainwright chased Southwood down. As they started the last lap, the two were inseparable and the commentator was going wild as the pair disappeared out of view at the back of the track. When they reappeared the order was still the same and, in a last ditched effort to take the win, Wainwright held the throttle wide open going over the finish line going so fast he came off in a heap by the chestnut fencing.

Unfortunately for Wainwright, it wasn’t quite enough as Southwood won the race. The pair, in a good show of sportsmanship, shook hands and exchanged a couple of words. Whatley had re-grouped from his off finished third, all be it some thirty seconds behind the leading pair, with Murphy fourth and Day fifth.

Race two was restarted after a red flag incident. Wainwright got the holeshot and was challenged in the early laps by Whatley won the race by over fourteen seconds. Whatley was a comfortable second with a suffering Josh Coleman third, from Crowder, Luke Dean and Day. Whatley got the holeshot at the start of the third and final MX2 race of the day but was passed by Wainwright by the end of the first lap as the pair pulled away from the rest of the pack. They stayed in the order until the end of the race on what was by then a very rough track. Coleman once again was third from Crowder, Dean, Southwood and Day.

Overall it was Wainwright from Whatley and Coleman, with Southwood, Crowder and Day just missing out of the podium. In the championship standings, Wainwright now has a fifty-three-point lead over Whatley with Crowder and Coleman third and fourth.

“I am really pleased with my overall,” said a happy winner Wainwright, “The track was the roughest I have seen it out there. I fell a couple of times in the first race and had to work really hard in that one. In the other two races, I changed my gate position, which helped me get my two wins, so happy days.”

Whatley was content with his second overall and said, “It’s ok. I don’t get a chance to practice or train in the week anymore, so the only riding I get is on race days. I am not race fit. I push for a little bit then just have to hold a pace my fitness is comfortable with.“

Coleman’s day didn’t start too well and he said, “The day started badly when I dislocated my shoulder in qualifying. That threw a spanner in the works. But riding hurt I managed a sixth and two thirds for third overall. It’s a bit sore now, but we will have to keep working on it.”

Lewis Dowdeswell won all three of the 125 championship races and was chassed over the finish line, two out of the three races, by second overall Jimmy Margetson. James Hanscomb was always in the top four, which gave him third overall with Chris Povey just missing out on the podium. Dowdeswell now leads the championship by thirty-nine from Povey with Ryan Zebedee still third.

The ever-popular Phil Mercer was a late entry in the vets and went out and won all three races, but behind him it was all happening. Jamie Powell, with two-second places and a third was second overall with Gary Davies third after a struggle in race two. Simon Lane was fourth overall with second to fourth separated by just fourteen points in the end. Powell now leads the championship by ninety-four points from Lane with Craig Chamberlain third.

In the youth 85/150s it was Joe Brooks all the way with three races wins from three starts on a track not really suited for the smaller wheeled machines. Harry Ridgway finished in the top three in each of his races for second overall with Max Lewis third and with Matt Tolley missing a step of the podium by three points. Tolley can take comfort for not getting on the podium by the fact that he now has a whopping 158 lead in the championship standings with Ezra Blackwell and Harry Ridgeway second and third separated by a single point.