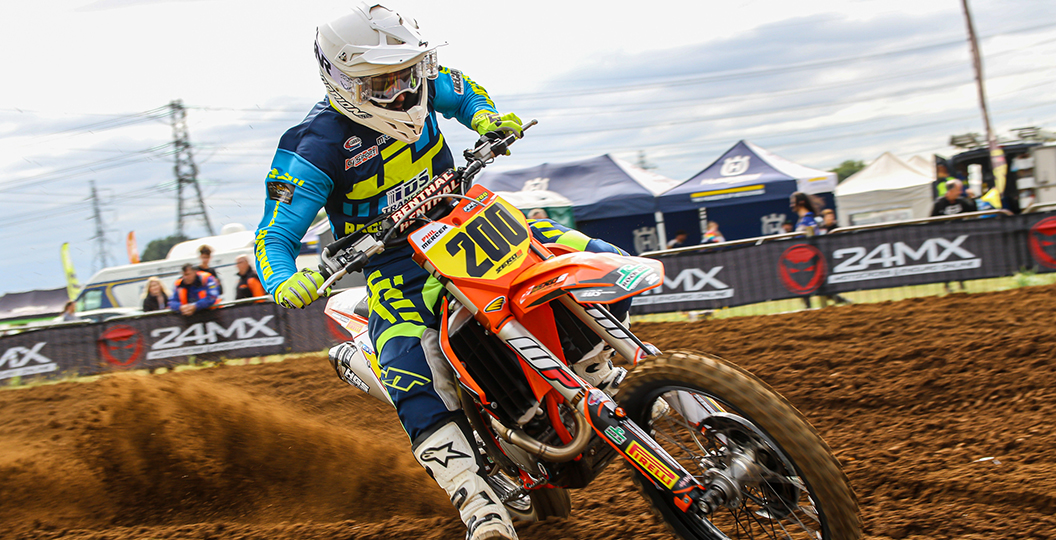 We returned to the fan-favourite circuit of Culham this past weekend for round eight of the AMCA Championship and, with the addition of the bonus points coming into play, there was some super confident riding and race craft between all parties!

Lewis Dowdeswell looked very smooth heading into Sunday mornings timed practice, taking a strong P1 position, but not without the FUS Marsh MX Rider of Chris Povey hot on his tail. Nathan Bache made up your top three. Race one showed Dowdeswell making a clean holeshot, but with coming under pressure by Povey, Bache and Ryan Zebedee, He managed to hold them off and take race-one win. Race two and three were a completely different story though as the track conditions changed drastically and the dust began to kick up. The battles continued with Povey, Dowdeswell and Bache taking it to the finish, with Chris Povey dominating and taking the wins in race two and three. That stuck him in first overall in the 125 class.

Luke Dean showed no signs of slowing down after his IMBA success this weekend. Kristian Whatley took the early lead, with Jamie Wainwright putting the pressure on and an aggressive-looking Cory Southwood not far behind. The battles between him and Luke Dean continued throughout the day. With Jamie Wainwright on another level this weekend, the championship will go down to the wire with only two rounds remaining. Will we see an MX2 champion crowned in the next couple of weeks?

The Vets class has had a shake up also these last couple of rounds with the return of Phil Mercer! Phil has been an AMCA Championship racer for a fair few years now so it was great to see him back from retirement, taking the overall win this weekend at Culham. With Jamie Powell and Simon Lane still battling it out from the start of the year for the championship title, it’s all changed around a little with the bonus points being added in also. Sean Smith also had a great ride this weekend after coming back from a nasty wrist injury, but he still managed to finish fourth overall.

The MX1 class had plenty of action going on this weekend to with the return of an aggressive-looking Josh Waterman! Shane Carless however was the man to catch this with two storming race wins. In race one he took the clear lead after a couple of laps, with Neville Bradshaw sitting in P2 until Waterman made the pass. That left the DK Off Road rider in third for race one. Keiron McCavoy had a tough weekend also as a few riders did as the track got rougher, resulting in a crash in the first and second motos for McCavoy.

Heading into race two Sean Wainwright had the best results of the championship so far with a ninth position, then went into the third race with a seventh. Into race three we saw the Dk Off Road rider of Neville Bradshaw take the win, which currently puts him third in the championship. Unfortunately we saw the Team Apex UK rider Gary Gibson suffer with an old injury, which resulted in a DNF for the day from him. Shane Carless, James Dodd and Neville Bradshaw were your top-three overall in MX1 this past weekend. Just sixty-nine points separated first and second.