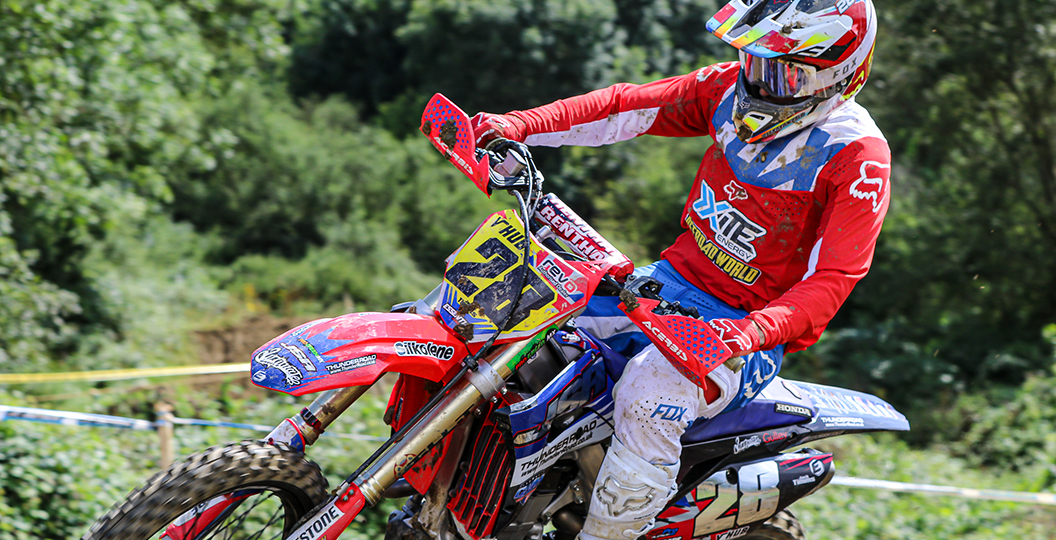 Mother Nature nearly put a halt on this weekend’s fun down at Brookthorpe for round nine of the AMCA Championship, With torrential rain on the Friday and Saturday morning, it was decided that the meeting would still run! With the start being moved on the Sunday morning a bit further up on the hill to avoid the deep original start straight, the sun coming out changed things as it started to dry the track up heading into Sunday’s qualifying.

First out on the tricky Gloucestershire circuit we had the 125 class, with things hotting up between FUS Marsh MX rider Chris Povey and Lewis Dowdeswell. P1 was swapping around between Lewis, James Hanscomb, (wildcard rider), Travis Steels and Povey. Your top three ended as Hanscomb, Dowdeswell and Steels.

Race 1 Saw James Hanscomb taking the win just infant of Chris Povey, Shortly followed by Lewis Dowdeswell and Ryan Zebedee. Travis steels seemed back on form with a P6 finish. Heading into race 2 things changed around a little with Povey taking the win, With Jimmy Margetson claiming P2, and Hanscomb P3, With Championship leader Lewis Dowdeswell finishing P4. Final race of the day with the 125 Class, saw Hanscomb, Povey and Dowdeswell taking your top three, and the same for the overall. With only 2 points now separating Povey and Dowdeswell, its going to be all to play for heading into he final round at the end of the month.

Shane Carless certainly looked like he was on rails this weekend in the MX1 Class, putting his FUS Marsh MX Husqvarna to the test against the likes of Dk off roads Neville Bradshaw, and the IDS transport rider of Josh Waterman, the top 5 in timed practice were battling it out and we saw Ashley Greedy look like his old self sitting in P4 in Timed practice. Your first race consisted of Carless, Bradshaw and Dodd in your top three, Followed by waterman, Greedy, and a great 7th place finish for Luke Meredith. Things changed around for race two, As Bradshaw took the win, Followed by Dodd, Waterman and Carless. Final race of the day saw the MX1 boys battling it out for those ever important championship points, and Bradshaw putting in the fastest lap with a second between him and carless. Your overall for the MX1 Class is as follows, Bradshaw, Carless and Dodd, With only 1 point separating P1 and P2!

The MX2 Qualifying saw the likes of Luke Dean taking the fastest lap, followed by Jamie Wainwright and Adam Harris. But race 1 is where things defiantly got interesting! With Kristian Whatley suffering a hand injury earlier on in the week, this left him down in 14th place in race one, With Jamie wainwright taking the win and extending his championship lead further, Shortly followed by Corie Southwood and Ryan Crowder. In race two this saw Wainwright take a second turn tumble putting him dead last! Pure grit and determination got him back to fifth position, But the race win went to Corie Southwood, Crowder P2 and Luke Dean P3. Here’s what Southwood had to sat about the day.

“I started off the day putting a qualifying time in giving me a 10th which I wasn’t really happy about, So in race 1 I went out and I gated 7/8th then quickly moved to the front. I found myself in a battle for the lead so I pushed for it and managed to get into the lead and start pulling away.

Despite gating not very good I used some energy getting there and got a bit tired, Then Wainwright caught up and passed me towards the end.”

“In the second race I managed to holeshot and never looked back! I felt amazing everything was perfect and pulled a nice comfortable gap over the rest of the field to take the win, But going into race 3 I knew I couldn’t get the overall so I didn’t take any risks and go all out I just used my head and sat behind Adam Harris for a little while, Wainwright passed me towards the end but I was focused on getting myself and my teams first overall win because that’s what we been trying for all year.”

“Huge thanks to guy Langmead and Justin hay the men behind LHRT race team and for having patience waiting for me to get on form again.”

Next out on track we had the Youth races, Which we had the usual top three riders of Matt Tolley, Jake Randall, and Harry ridgeway making up your top three qualifiers, Shortly followed by Ezra Blackwell, Joshua Fletcher-Williams and Reece Leverton. Bit of a change up heading into the first race though with the Championship leader Tolley finishing in 4th position, With Randall taking P1 with Ridgeway nearly 10 seconds behind, Followed by Blackwell. Quite a few of the youth riders struggled with the track conditions this weekend, but as it started to dry up this changed the order around a little! With Race two’s results being the same, Race three saw Ridgeway take the win, With Randall nearly 11 seconds behind and Jake Ogorman sat in third. This put Jake Randall P1 on the overall, With Harry Ridgeway and Matt Tolley rounding out your top three.

Once again Phil Mercer dominated across all three races in the vets class this weekend, with championship leader Jamie Powell pushing on for those ever important championship points. In race 1,2 and three it went Mercer, Powell and Simon lane, But also looking back on form was Sean Smith, We caught up with him here.

“I had a challenge day at brookthorpe still suffering with a wrist injury from earlier in the year. It was very wet for qualifying and being the second group out there wasn’t many lines developed but it was the same for every one. I qualified 7th so wasn’t to bad for a short bloke that can’t touch the floor! I didn’t get the best of starts on the old school scramble grass start and then crashed in the wooded section on the fist lap which put me way down the field, So had it all to do in the heavy conditions but managed to salvage 6th at the flag.”

Moto 2 was a much better start and the track had dried out nicely had a good battle with Craig Chamberlain, but managed to pull ahead to finish 5th. Moto 3 was pretty much the same but it started raining half way through which made it challenging but finished 5th at the flag for 5th over all on the day. Just want to say well done to every one involved in running the meeting as they where up against it from the start!”