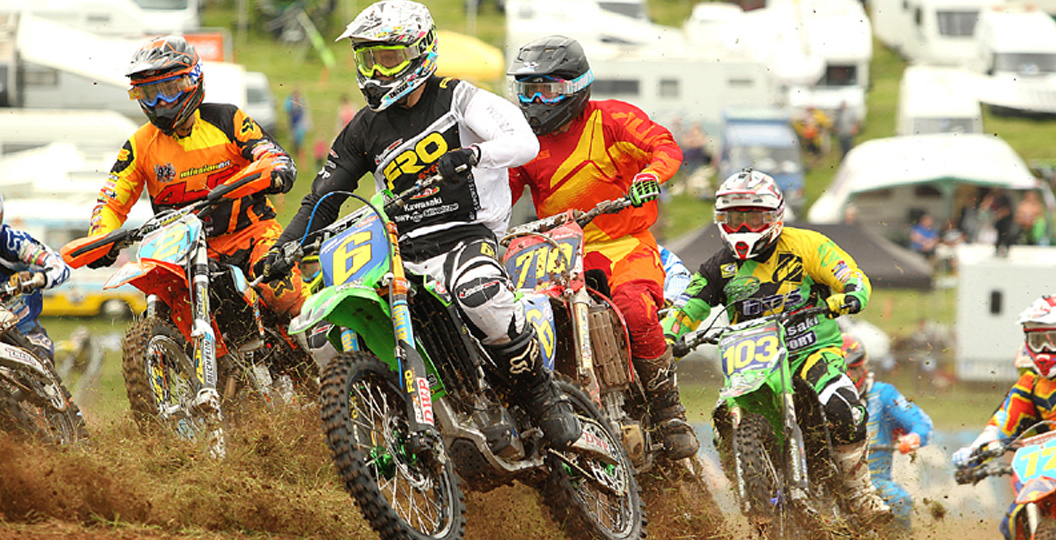 Great racing, dramatic incidents and a continually changing leaderboard,round 2 of the AMCA British Motocross Championships powered by Datatag had it all and so much more at Bevercotes,Nottinghamshire on Sunday!!.And, on conclusion of battle it was to be two riders who have also tasted ACU Maxxis British Championship action who were celebrating as Luke Mellows and Ben Saunders topped the respective MX1 and MX2 classes.For Luke Mellows, round two was to be a particularly productive event as he not only took that overall win and picked up the Motomark Racing £50 award for recording the fastest lap time but also now heads the MX1 Championship standings. Whilst Brad O’Leary and Ashley Thomas joined Luke on the MX1 podium,Lewis King and Carl Benjamin completed the MX2 box with Benjamin still holding the advantage in the MX2 title race.

So on a track extensively watered both overnight and during early morning by the Ollerton MXC,it was time to go racing with the MX2 Championship chasers first into action.After a sticking start gate had halted moto one,the blast was finally on at the second time of asking and it was Bradley Tranter leading the charge ahead of Ryan Crowder, Ben Saunders,Cory Mcshane,Matt Ridgway and Dean Swift whilst Ryan Morris,Paul Neale and Jack Gardner had found themselves involved in a first turn collision and were now starting the long climb back up the leaderboard.At front,Crowder was climbing all over Tranter only to crash when attempting to snatch the advantage,thus slipping back to 7th.As Crowder dropped down the leaderboard,Ridgway was rapidly on a charge and moving in the opposite direction,swooping into the lead on lap three then maintaining his advantage right to the chequered flag despite a late challenge from Saunders.The next six places were filled by Tranter,Lewis King,Benjamin,Mcshane, Scott Mathia and Crowder.Of the early fallers,Neale stormed back to earn a strong 9th and Gardner got 15th but it was to be total heartache for Morris.After charging through the pack to 7th,Ryan’s Kawasaki motor then expired just two laps from home!!.

Aboard his spare green machine,Ryan Morris then found himself down in 11th spot during the early exchanges of moto two as Saunders made a super,flying start to lead proceedings with Neale,Ridgway,Daniel Hill,Benjamin,King and Gardner in tow.Just one circuit later and Neale had swooped into pole position with a great pass,but the moto one winner Ridgway was to be soon in trouble.Explaining in his own words,Matt said “As I dropped into a deep rut,I lost all of my momentum and virtually stopped.Carl Benjamin was right behind me and we collided. Although I didn’t crash,Carl hit my leg and it’s very sore and not feeling good.It was totally my fault and I apologised to Carl”.In that incident although Ridgway temporarily maintained 3rd,Benjamin fell but was quickly on his feet after dropping down to 7th.As the race progressed,the smooth and very quick Neale just kept on scorching ahead,before marching onto a great win.Showing great character after his earlier clash,Benjamin somehow recovered to snatch 2nd spot on the final lap after overhauling Saunders with Gardner recording a very impressive 4th from Mathia,Morris, Crowder,King,Tranter and Mcshane whilst the injured Ridgway had to settle for 11th.

Having recently switched from a two-stroke TM to a 250F Suzuki,Lewis King was showing that he has certainly adjusted to four-stroke power by featuring in a final MX2 moto classic.Quickly slotting into 2nd spot behind holeshot King Neale,the race was now on and what a battle it was!!.Lap after lap,Neale led the way expertly defending every move King tried to pull out of the bag as the two riders circulated the Bevercotes circuit just yards apart and at very high speed.However having repelled King’s close company and just when it appeared the battle was won,disaster was to strike Neale on the very last lap when his Kawasaki mysteriously ground to a halt,again proving just what a cruel sport motocross really can be!.So as the dejected Gloucestershire rider walked back to the pits area,King could coast to victory ahead of Saunders,Crowder,Mathia,Morris,Mcshane,Gardner and Tranter with Ridgway in pain but taking 14th.Earlier in the moto,Benjamin had been right in contention and holding 4th spot before suffering a very heavy crash which dropped him down to 11th.Undeterred Carl had to again fight back,this time taking 9th but still gaining some consolation from the fact that he still holds the MX2 series lead.

Not to be outdone at Bevercotes,the MX1 title chasing pilots were also to produce three great encounters.In moto one,Arran Poolman was fastest away with Luke Mellows,Brad O’Leary,Joe Jones,Clinton Barrs,Ashley Thomas and Elliot Barrs in tow.Two laps in though and Clinton Barrs produced one big,stunning effort,moving past O’Leary, Mellows and Poolman to now lead the thundering charge.On the same circuit,Mellows was also to slot into 2nd and the race was now well and truly on!!.Lap after lap it was Barrs under severe pressure from Mellows but maintaining his composure at the front.Using his vast racing expierence though,Mellows was to ride the perfect race and make his move on the very last circuit,outgunning Barrs on one of the big Bevercotes uphill sections to thus take the win. Taking 3rd in this opening MX1 clash was the very consistent Jones from Thomas,Jack Cox,Poolman,O’Leary,Luke Blanchard,Elliot Barrs and Benjamin Milward.Afterwards a dejected O’Leary bemoaned his own performance saying “I could just not find any energy out there and just went backwards,feeling very lethargic”.

Fuelling himself with the necessary food and drink,Brad was though a totally different proposition for MX1 moto two although it was Luke Blanchard who set the early pace.Getting off to an absolute flyer,Blanchard was right on the gas but what a rollercoaster ride he was to have!!.Falling on lap two,he dropped back to 3rd spot before another couple of crashes and a broken front brake caliper ended his participation for the day.At the top end,Jones also crashed out on lap five when clipping the back of Arran Poolman’s machine,requiring a trip to the local hospital to check out an injured knee.Taking the win again in moto two was the immaculate Mellows although the equally impressive Thomas chased hard right to the chequered flag and earn 2nd as O’Leary dug deep for 3rd ahead of C Barrs,Poolman, Ed Briscoe,Cox,E Barrs and Sean Frayne.Taking 10th in this clash was Richard Cannings,remarkably competing just one week after suffering suspected broken ribs at Hawkstone Park!!!.

Brad O’Leary fired his KTM into pole position at the start of the final MX1 moto although within one lap it was C Barrs now leading the charge.Quickly at the front,Barrs and O’Leary were locking horns in a fierce battle played out at such a pace that they pulled clear of Poolman,Mellows,E Barrs and Thomas who were hotly disputing 3rd spot.In a great encounter,O’Leary then retook control of the clash on lap six before the watching crowd were to gasp in horror at another dramatic moment.On the far side of the circuit,Clinton Barrs was to suffer a nasty,heavy crash after being spat sideways off his machine.These Barrs boy’s though are made of tough stuff and remarkably a dazed Clinton was somehow quickly on his feet,remounting in 9th.With Clinton out of contention,the pressure was now off O’Leary as he coasted home to victory with Mellows coming through strongly to take 2nd spot from E Barrs,Thomas,Poolman,a strangely subdued Jack Cox,Cannings,Frayne and Briscoe.Afterwards a very battered and bruised Clinton Barrs complained of having a swollen ankle,bruised shoulder and chest and maybe a bout of whiplash!!.However he has little recovery time with round three of this super Datatag supported series due to kick-off again in just two weeks time!!.

In the battle of the Championship Non-Qualifiers,Jack Hill finished top of the pile ahead of Matthew Hitchman and Curtis Mears.Restricted to just two blocks of action due to an unfortunate accident which halted proceedings for a lengthy period and required an injured rider being airlifted to hospital,Luke Spence won both Expert Support moto’s with Matt and Luke Ryder chasing hard.Over in the Seniors and Juniors Support racing the respective overall victories went to Ashley Wharton and Carl Poucher.