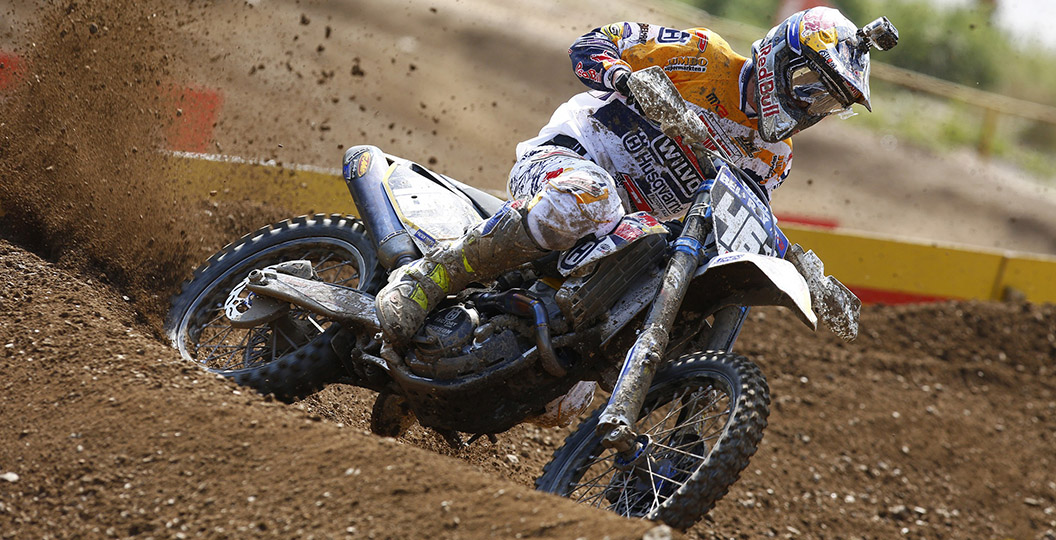 Round 14 of the FIM Motocross World Championship ended in bitter disappointment for Wilvo Nestaan Husqvarna Factory Racing’s Romain Febvre when the Frenchman missed out on the overall MX2 victory. Getting his weekend off to a perfect start by securing a comfortable win in Saturday’s qualification, Febvre was one of the hot favourites to secure victory in the absence of championship leader Jeffrey Herlings.

After a mid pack start the Husqvarna rider battled his way forward to finish second in race one. Fairing better out of the gate for race two, Febvre worked his way into third to place a virtual hold on the overall MX2 win. Stalling his engine exiting a corner he dropped back to fifth but retaking both Jose Butron and Vallentin Guillod within one lap put him back in the driving seat. Disappointingly hopes of victory then disappeared in a crash a couple of laps later that demoted him to sixth and fourth overall in the GP.

For Febvre’s teammate Aleksandr Tonkov his MXGP of Czech Republic was up and down. A crash at the start of race one left the Russian playing catch up. Carving his way through the pack, Tonkov recovered well to finish eighth. Grabbing the Fox Head holeshot, race two got off to a much better start. Locked in a four-way battle for a top three result for the majority of the race, Tonkov was denied at least a top five position when a few errors dropped back to seventh.

In the MXGP class, Red Bull IceOne Husqvarna Factory Racing’s Dean Ferris enjoyed mixed results. Placing a determined fifth in Saturday’s qualification, Ferris entered Sunday in a confident mood. Placing well off the start in race one, the Husqvarna rider then spent the first half of the race riding too defensive. Despite picking up his pace in the latter stages of the race he was unable to reel the group in front of him back in and finished ninth. Set to improve his position in race two, Ferris held eighth for the majority of the race. But with two laps to go he crashed and dropped back to 15th.

Recording another consistent set of results in MXGP, Nathan Watson ended his weekend in Loket with a pair of 13th place results. Getting boxed out off the start in both races, the young Brit rode strongly to fight his way back inside the top 15. Delivering his best result in race two, Watson just missed out on a top 10 result by five seconds.

The FIM Motocross World Championship continues with round 15 at Lommel, Belgium on August 3.

Romain Febvre: “After such a strong weekend I’m bitterly disappointed to have missed out on taking my first overall GP win. Finishing first in qualification and securing pole position was a big confidence boost for me on a track that was very slippery and technical. In race one my start was ok but I moved forward quickly and got to second. Race two was much better and I attacked hard knowing the overall win was on the cards. In one lap I went from fifth to third but then I stalled in a corner and fell back to fifth. I recovered immediately and got back into third within one lap to hold onto the virtual overall win. Then in one corner my front wheel washed out and I hit the deck. I’m gutted – that small mistake cost me both the win and a chance of the podium.”

Aleksandr Tonkov: “It’s been up and down for me in Loket. In race one I got taken out off the start and had to play catch up all race. It felt awesome to take the holeshot in race two. I was riding really well and involved in a really big battle for third. Unfortunately I made a couple of little mistakes and I dropped back but it was a good race for me. Next weekend is a home race for the team in Lommel. I like the track and will give it my best shot to improve.”

Dean Ferris: “I feel I’ve rode well on a track that wasn’t too my liking. The ground was rock hard and it was conditions I haven’t rode in for a while. Saturday’s qualification was great and finishing fifth gave me a good gate pick for Sunday’s races. In race one I spent the first half defending my lines too much and sort of lost touch with the front guys. I got into my groove towards the end, improved my lap times but couldn’t reel them back in. Race two was going great. I passed a bunch of guys and was holding onto eight until I crashed with two laps to go.”

Nathan Watson: “Carding a pair of 13th place results has been a positive weekend for me. It was a new track for me and took some time to adjust. The smoother you rode the better it was. I had the 14th gate pick for Sunday but even though my reaction off the gate was good I kept getting boxed out in the first corner. In both races I managed to pick off riders but just wasn’t able to join the top ten group.”