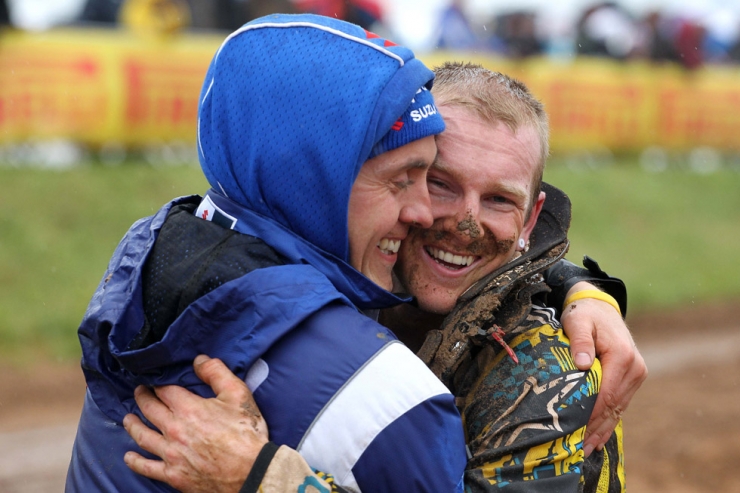 Having raced many times at Desertmartin over the years in both the junior and adult ranks, as you would imagine, I have some very fond memories of what I would class as one of the world’s best motocross tracks.

Desertmartin is talked about with fondness all around the globe and anyone who races there is always given a warm Northern Irish welcome. We’ve seen the likes of Smets and Everts race here and the days when they called it Crockstar’s Playground, but the action off the track and into the wee small hours are usually as memorable as the racing itself!

Unfortunately most of it is unprintable [thank God I hear a few of you saying!] but does raise a smile when we all gather to reminisce about ‘the good old days’ at this famous venue, which sits proudly at the foot of Slieve Gallion in County Londonderry.

My connection with Suzuki and more so TAS Racing, goes almost as deep as my relationship with motocross, so to be coming back to ‘The Desert’ as team manager of the official Suzuki team and flying the colours of our new sponsor, Tyco Security Products, is a great honour for me.

My connection with the TAS team is deep rooted and when team owner Philip Neill asked me to manage affairs at the start of 2011, I saw it as a new challenge and a chance to re-pay Philip for the faith and dedication he showed me during my own motocross career.

Swordy needs little or no introduction to the British motocross paddock, having already collected gongs for four championships in the MX2 class. His racing desire before he retires is to take home the MX1 title and I believe along with Tyco Suzuki, we can we realistically achieve that.

Like any rider joining a new team and jumping on a new bike, it has taken Swordy a while to get comfortable and familiarise himself with the RM-Z450. He has shown glimpes of brilliance at Canada Heights and also in the opening round of the Red Bull at Landrake taking the overall, but is getting more and more confident with every race meeting. I’m sure he’d love nothing more than an overall win at Desertmartin this weekend at the British round, especially as the team workshop is based just down the road in Moneymore.

In Stuart Edmonds we have a young man with a lot of raw talent and if he keeps applying himself to the job in hand, he can be a regular front-runner. He’s a big strong physical lad who throws the RM-Z250 about with consummate ease, but if he can settle himself and improve his starts and early lap pace, then I’m confident he too can finish the season on a high.

Martin joined the team right at the end of May; unexpectedly I might add, but didn’t he set his stall out with a great overall win at Fatcat in the Red Bull Pro Nationals on his RM-Z450. He’s a rider I’ve known and helped since his schoolboy days and despite the current economic downturn, Philip Neill and I decided very quickly that we’d like to help him if we could. It’s not a decision I believe we would have made for any other rider, but as a local man and knowing the sacrifices Martin makes for his racing, I think he’ll fit in well alongside Swordy in MX1. It might also make the oul bugger go a bit quicker!

Standing at the side of the track this weekend at Desertmartin, I’m sure I’ll sprout another few grey hairs in the head scratching moments, making me understand what my late father Robbie and Philip Neill went through all those years ago – when all I was worrying about was how I looked and what good looking women were hanging over the fences cheering me on!

It’s an honour to be here in the colours of Tyco Suzuki and along with the inimitable Davy Turk and our mechanics Paul Conway and Philip McLaughlin; we’ll be doing our utmost to put our Celtic Warriors on the podium.

See you at The Desert.

Adam was taking to Paul Lindsay