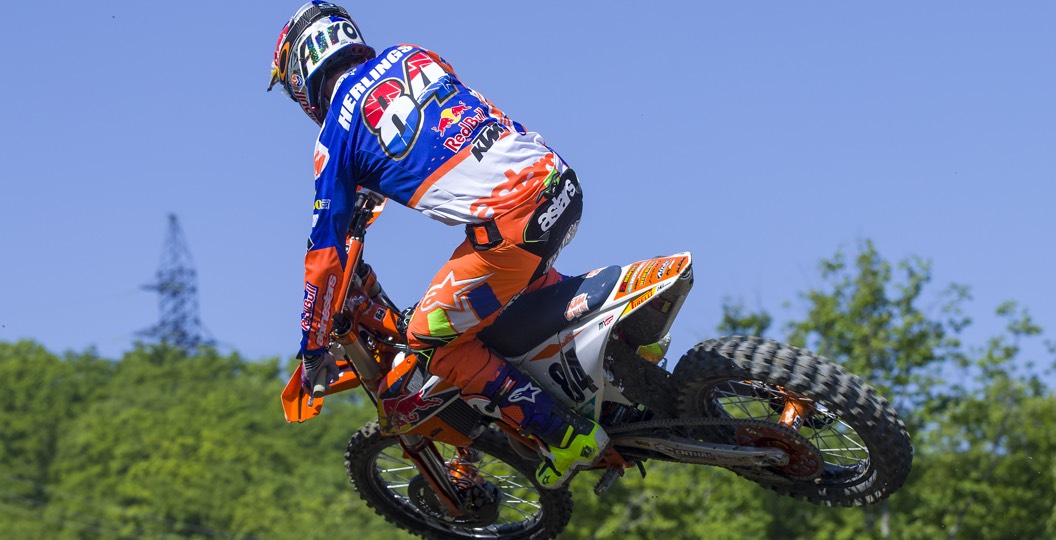 – Clement Desalle was on top form in Russia, no one would attempt to dispute that. The twenty-three-time Grand Prix winner was particularly impressive in the first encounter, which took place at midday on Tuesday, as he disposed of the Red Bull KTM duo quite quickly and immediately pulled away. The cushion that he built up on the first five laps served him well towards the end. How fast was he through that period? Those times are highlighted in the table below.

– Another table! Things changed quite drastically towards the end, as both Antonio Cairoli and Jeffrey Herlings opted to up the pace considerably. They ended up going faster than they did at the beginning of the race! A statistic like that speaks volumes about the level of fitness that these athletes possess. There is actually an interesting point in the table below, as all of these guys set their best times on lap nineteen. What a weird coincidence and, hey, props to Desalle for being able to respond to what was going on behind him.

– How odd is it for the top three riders to set their quickest times on the same lap? It is rare, although it did happen at the Grand Prix of Trentino last month. Jeffrey Herlings, Clement Desalle and Romain Febvre were all at their best on the fifth lap of nineteen. One would presume that something like this would occur on a sand track, where everyone is going considerably faster on lap one than they are at the end.

– Clement Desalle does not land on the top step of the podium too often nowadays, so events like the Grand Prix of Russia must be savoured. When was his last victory? Well, funnily enough, it was at Orlyonok last year, which was three hundred and twenty-five days ago! Desalle last won a single moto on that day last year as well, so a return to the top was due. It is actually rare for a rider to overcome such a drought, especially at twenty-eight years of age.

– Clement Desalle climbed up onto the top step of the podium twice last year, of course, and won two motos as well. Both of those triumphs occurred during the second motos though, so when was the last time that he actually won a first moto? It has been quite a while! Desalle last claimed a victory in race one at the Grand Prix of Patagonia-Argentina in 2015. There was a gap of one thousand one hundred and thirty days between that event and the Grand Prix of Russia on Tuesday.

– There are even more Clement Desalle-related statistics to ponder! Desalle has now claimed twenty-three overall victories in sixteen different countries (Brazil, Latvia, Bulgaria, the USA, Portugal, Sweden, Qatar, the Czech Republic, Belgium, Great Britain, Italy, Spain, Germany, The Netherlands, France and Russia). Desalle has claimed three victories in the Czech Republic and Portugal, so Russia is not far from that! Two victories put Russia on par with France and Italy.

– This point is not necessarily relevant to the Grand Prix of Russia, but it ties in with the previous point. How many different countries has Antonio Cairoli claimed an overall win in? Twenty-three. Belgium, Portugal, Italy, Sweden, the Czech Republic, Germany, South Africa, France, The Netherlands, Spain, Bulgaria, Ireland, Great Britain, Turkey, Latvia, the USA, Brazil, Mexico, Russia, Thailand, Finland, Switzerland and Qatar. Not a bad collection, is it?

– The Grand Prix of Russia was obviously a successful outing for Kawasaki, seeing as they ended the streak of KTM victories, but there was another reason too. Three Kawasaki riders finished in the top ten overall in the premier division, which no other manufacturer matched. What a turnaround! When was the last time that there were three Kawasaki riders towards the front? It was at the Grand Prix of the Americas two seasons ago; Eli Tomac (first), Clement Desalle (fifth) and Jordi Tixier (eighth) slotted into the top ten.

– Jeffrey Herlings is just brilliant to watch on a bike, as he tends to find lines that separate him from the competition. The way that he was bouncing off of a braking bump and down a drop off in the first sector towards the end of moto one garnered attention and is a great example of the above. Sector one was relatively small, seeing as it only lasted for around eighteen seconds, but the series leader still made it count. The table below acts as proof of that.

– A lengthy streak ended in Russia! Jeffrey Herlings had been fastest in every free practice that had been run since the Grand Prix of Portugal last year, so his streak sat at thirteen. It was actually quite exciting to ponder how long it would go on for. A luggage issue ensured that he would not even be able to take part in free practice at Orlyonok, however, so Tim Gajser ended his run. It is most likely that Herlings will start another streak at the Grand Prix of Latvia in a little over a week.

– Jeffrey Herlings had his worst finish of the season in the first moto at the Grand Prix of Russia, as he crossed the line in third. The KTM-mounted rider has not dropped outside of the top three in twelve races though! When was the last time that an MXGP rider started the season in that fashion? Stefan Everts did it in 2006, as his scorecard across the first twelve motos (2-1-3-1-1-1-1-1-1-1-1-1) was most impressive. It must be said that Everts faced a weaker field that season, however, as a relatively inexperienced Kevin Strijbos was his closest rival.

– Yamaha have still not had a rider finish on the overall podium in the MXGP class, which is obviously fairly disappointing for the factory effort. When was the last time that they started a campaign in the premier division in this fashion? It was in 2013. Yamaha went sixteen rounds without a single podium finish. Steven Frossard and Joel Roelants were beneath the Monster Energy Yamaha Factory Racing but, unbelievably, Shaun Simpson and the JK Racing squad ended that drought at the final round.

– Pauls Jonass returned to the top step of the podium at the Grand Prix of Russia, following a massive drought of thirty-eight days, and claimed the tenth overall win of his career. Where does that put him in the MX2 record books? Jonass is now seventh on the list of all-time winners and has inched one victory ahead of Ben Townley. Townley, of course, acquired all nine of his wins in a single year, whereas Jonass took a little longer to hit the number.

– It seems that the Grand Prix was perfect for Pauls Jonass on paper, as he won qualifying and then swept both motos on Tuesday. It could have ended in a different way, however, had Jorge Prado been close enough to successfully complete his pass on the final lap. It almost ended in disaster! Jonass later admitted that he may have relaxed too much, but do the lap times reflect that? Dissect the table below.

– Ben Watson broke through on Sunday, as everyone is aware, and landed on the overall podium for the first time in his career. How long did it take him to get to that point? Watson has completed eighty-six motos as an MX2 rider and forty-three rounds. Additionally, he has finished inside of the top ten in twenty-two motos through that time.

– Michele Cervellin had a season-best finish in the second moto at the Grand Prix of Russia, as he crossed the line in third. Who else managed that? Iker Larranaga Olano (tenth), Brent Van Doninck (eleventh) and Morgan Lesiardo (nineteenth). All of those riders were in need of a boost at the sixth round of twenty.

– Speaking of Stephen Rubini, the Silver Action KTM star made more passes than anyone else at the Grand Prix of Russia. Rubini went from twelfth to fifth in moto one, which shocked pundits, and then made an additional move after that as well. The second encounter was even more impressive, as he moved from twenty-first to eighth at the chequered flag! Seventh overall was a career-best overall. In fact, he had only finished inside of the top ten in the overall classification once before.

– Conrad Mewse has had a difficult few weeks, as he has acquired twenty-seven points across the last three rounds. Whereas, in comparison, he scored eighty-one points at the first three rounds of the current campaign. An eighth was his average finish through the first half of the series. What about the second half of this season? Eighteenth has been his average.

– The Grand Prix of Russia was run on a Monday and Tuesday this year, as that was Spring and Labour Day in the country. The hope was that, seeing as the locals were not at work, they would flock to the sixth round of MXGP. Did that work as expected? 35,000 was the weekend attendance, according to Youthstream, whereas it was 40,000 a year ago. How does that number compare to the other rounds that have been run this season? The table below has all of the numbers.

– There were a handful of comments about Orlyonok being rather short, but that was not necessarily reflected in the statistics. Twenty laps were run in the motos, which is more than any other race this year, but that number was also hit at Assen last year. How does that compare to the previous event in Portugal? The motos went for nineteen laps there, so it was not too big of a difference.