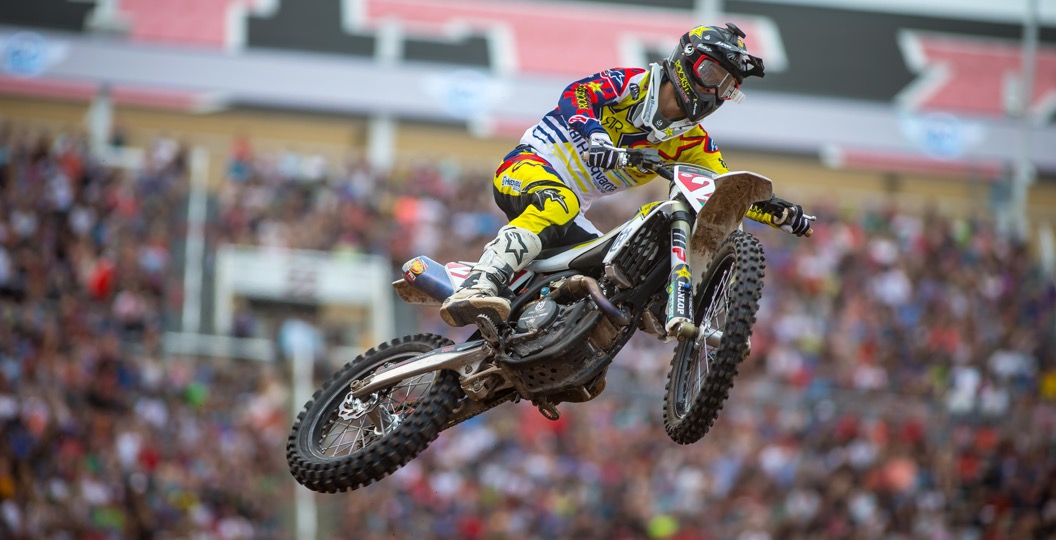 With just one race left in the 2018 Monster Energy Supercross series taking place this weekend in Las Vegas, there is not a whole lot of speculating to do. I expect the three riders who all have double digit points leads in their classes to do what they need to in order to take these titles home. Yes, Rockstar Husqvarna’s Jason Anderson pulling into the mechanic’s area to change a front wheel out last weekend was exciting and a stark reminder of what could go wrong at almost anytime in this sport but, with over a race lead in the points, Anderson did what he could to save some points.

I saw a few media people talking about how resilient Jason was in his ride and for not quitting. Uh yeah, why would he possibly just pull off the track when he knew he can get a wheel put on and he needed to salvage some points. I doubt quitting ever came into his mind, at least I sure hope it didn’t. Let’s leave the superlatives for when they are really needed, yeah?

Still, although it is a long shot, Red Bull KTM’s Marvin Musquin has a shot at this 450SX title. Stranger things have happened in the sport over the years. He’ll need some luck to make it happen, but he has won the last two races in a row and is on a roll. Last year, Monster Energy Kawasaki’s Eli Tomac raced to the front of the pack ahead of Ryan Dungey then tried to slow the pace down in hopes that Dungey would get either flustered and fall or that people would pass him and Tomac would get the gap he needed to win the title. It was the slimmest of hopes to be sure and all it really did in the end was cost Tomac the race win, as Anderson took that.

The thing that Marv won’t do is follow that strategy as we know Anderson’s his quasi-teammate there on the Husqvarna. Just in case there was any doubt, look at a member of Red Bull KTM pitching in there to help put a stand under Anderson’s bike. He is not going to try anything on Anderson like he did on Tomac in Foxborough because, see above.

For Anderson, all he has got to do is start well and make it through the first lap somewhere around tenth and his skills combined with the lack of depth in the field will allow him to clinch his first 450SX title. When it happens, and I fully expect it to, it’ll be interesting to see where he goes from here. We don’t have a lot of one-time 450SX champions in the sport. Once you get to the top of the mountain, you are able to stay there for a few years. There are riders like Tomac and Honda’s Ken Roczen who many would say have greater speed than Anderson, but he’ll have something neither of those have and that’s a 450SX championship. Sure, Musquin and Tomac have more wins this year than him, but he’ll have the belt and the experience that goes with that.

As far as the 250SX Western series is concerned, Star Yamaha’s Aaron Plessinger is on track to clinch his first pro title. Plessinger is an interesting dude, he raced off-road forever and was very good at that before deciding to try moto. He has proven to be great at that as well as he’s slowly climbed the ladder from raw rookie with talent that makes mistakes to fast pro that makes mistakes to now, a rider that seems to have learned from his lessons of the past. There was always that one race or one moto for AP where things went south, but he has been better this year and has been the fastest, most consistent of his career.

There are times in a race where Plessinger will be unbelievably faster than the rest of the pack. Like, we’re talking a couple of seconds or more a lap and you can’t luck into that kind of speed. It’s just been a question for him of trying to figure all that out. Now he has and his future is bright. I like Aaron’s personality, he’s going to be a father soon, he’s got a good sense of humour and doesn’t seem to let this whole circus affect him much. He’s a hard worker off the bike and although some wondered if he took this sport seriously enough, it seems that he does.

On the east, it’s funny how stuff works. Rockstar Husqvarna’s Zach Osborne is on the verge of getting his third title in the last year and a half and I’d argue that he hasn’t ridden as well this year as last, but he has got a larger points lead than 2017. So he and the team will take it and, for me, he’s still the odds on favourite to repeat in the 250MX class as well.

So from Anaheim to Houston to Florida to Massachusetts and more, the supercross season comes to an end this weekend. Three lives will be changed forever and the history books will be marked appropriately. We think we know how it’s going to go but as Anderson’s Salt Lake outing showed us, you just never know.