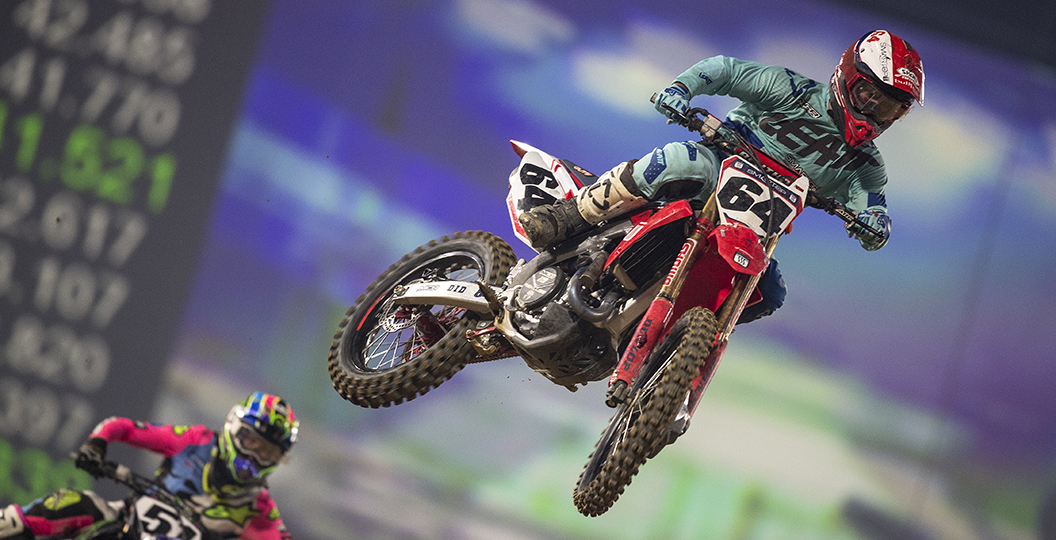 It is the Geneva SX this weekend and this one marks the final off-season race of the year. Now, finally, everyone will be hunkered in for Anaheim 1 and the gruelling start to the USA season will begin. This weekend’s race, one of the longest in Europe at this point, looks to be shaping up pretty good with Paris SX winner Justin Barcia probably being the slight favourite for the win. He is up against Smartop Bullfrog Spas Honda’s Malcolm Stewart and Team HRC’s Justin Brayton, as well as Mike Alessi, Josh Hill, Martin Davalos (a potential sleeper), Vince Friese and more.

One of the things that struck me at Paris was how damn close guys like Barcia, Stewart, Dylan Ferrandis, Justin Hill and Vince Friese were. All the racers were close and the actual battles on the track were pretty good. This weekend we should see more of the same I think. After showing so much speed every time he lines up on the track, it would be great to see if Stewart could actually win one of these things. Crashes and/or bike problems have doomed him at these overseas races the last few years.

Davalos will be interesting to watch as he’ll be on a Monster Kawasaki but by all accounts will be on a Team Tedder KTM come Anaheim. I’m sure a Monster sponsor wanted a green Monster rider out there and the money probably spoke well enough to Marty for him to put the KTM aside for a weekend. This race is always pretty fun: It’s two nights, the track is big and dirt is good so buckle in for one last wild ride of supercross before the real stuff starts.

Also coming out this week was the news of the H.E.P Suzuki team for 2020. Like JGR Racing, this teams been in a bit of a lurch waiting for Suzuki to figure out what they are doing with racing and who they can give support to. If you are a Suzuki fan you might want to enjoy 2020 and soak it in, because by all indications they might not be racing at a high level in 2021. Anyway, H.E.P announced that they have added the 12-round motocross series to their program for next year (they just did supercross in 2019) and that they are also keeping Adam Enticknap.

The new additions to the team are journeyman Kyle Cunningham and a fresh-off-the-MXGP-series Max Anstie. Interesting picks for sure: Cunningham is a solid veteran at this point more than capable of being in every main event. He’s a lot like the rider the team had last year, Kyle Chisholm, where you may not notice him a whole lot out there but at the end of the night he is in the main and close to the top ten.

Anstie is an interesting hire for sure – he did supercross early in his career over here but the last time he raced indoors was seven long years ago! That was in the 250SX class where he logged some decent results but certainly never indicated anything really special. It’s hard to see him really setting the world on fire in 450SX but he’ll be somewhere around the top ten one would think once he gets up to speed. The outdoors are where he should do a bit better of course and at tracks like the WW Ranch and Southwick we might even see Mad Max land on the box.

Maybe I’ll be proven wrong but it’s refreshing to see a team hire a rider for his motocross skills like H.E.P did with Anstie. I mean, I hope that was the case. The thought of Anstie doing anything in supercross seems a bit far fetched to me. Riders generally don’t get better at the indoor stuff seven years later. Enticknap will have to really work on his outdoor prowess to end up going outdoors with the team but both Anstie and Cunningham will be in the top ten most weekends.

No matter what happens, it’s interesting to see the addition of Anstie to the series over here and it’ll be something to observe all year long. It’s a step up for the H.E.P Suzuki team to get someone who will have worldwide appeal as well. I’m not sure I would’ve signed Max up myself but it’s a roll of the dice that could prove to be great.