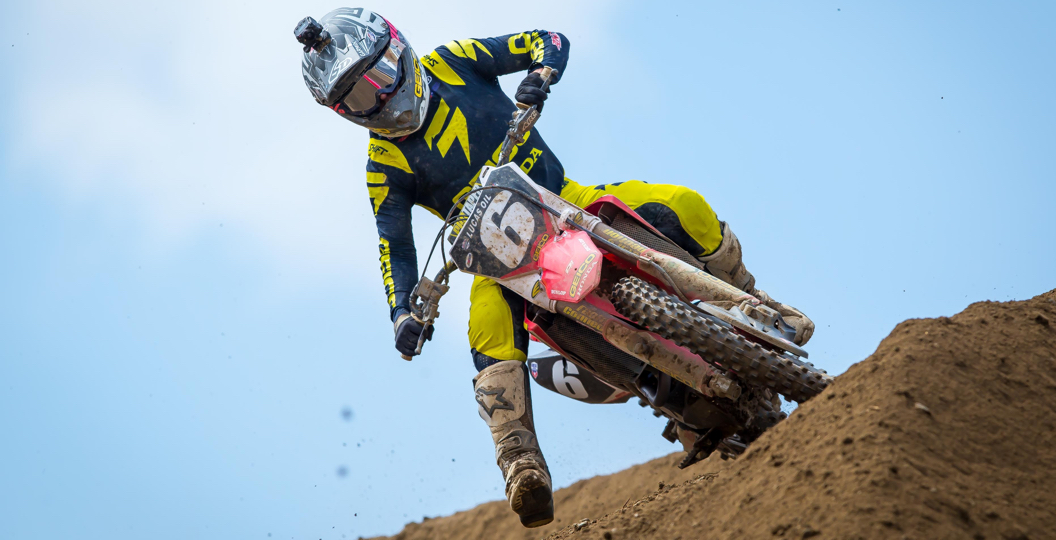 “I was trying. I could not quite get up on him enough to get him, to make it happen. I was probably twenty minutes in and I saw the halfway and I was just seeing fire at that point,” GEICO Honda’s Jeremy Martin told me. “I was like; I just need to blow this kid’s doors off. It is hard because he was actually going really fast. For anyone for that matter, if you are behind someone for literally fifteen/twenty minutes you are like, I’m tired of getting roosted.”

The two-time 250MX champion was talking about trying to get by rookie Justin Cooper last weekend at the Glen Helen national and I was there, I can vouch for J Mart riding on the rear fender of this kid for twenty-five minutes. There was nothing that he could do and at times it looked like he was shaking his head exiting some turns. There was not anything he could do and frustration was showing.

Martin would not get the kid, but he did beat him overall with a third and remains third in points behind co-leaders Aaron Plessinger and Zach Osborne after just two of twelve rounds of the Lucas Oil Pro Motocross Championship.  Yeah, Martin’s got two 250MX titles with Star Yamaha (last year, his first with Honda, he finished second in the series) but a case can be made for the fact that he is riding better than ever.

Indoors saw Jeremy breakthrough with wins and a riding style and composure more so than we ever saw before with him indoors. The big change for Martin this year was moving out to Colorado to train and ride with Monster Energy Kawasaki’s Eli Tomac. It is a change for the better for him and he even told me he has got no plans to go back to his native Minnesota this summer like he usually does. Both Tomac and Martin seem to be close to the same guys they are understated, hard workers and pushing their bodies in anything and everything they do is a fun day for them. Jeremy’s brother, Alex, joked that they are perfect for each other because they are both “socially awkward”.

“You cannot deny training or being around someone [Tomac] that has basically won the first four motos (of the year),” Martin told us on the Pulpmx Show. “I think he has won like seventeen supercross races in the last two years. To have someone like that, even though he rides a 450F and he has got an advantage, to be able to chase that every day, it puts me on my edge. It pushes me and makes me uncomfortable every day to get better. I really like it here. Out of all the places I have been this has probably been the coolest thing to being back home, for sure.”

But what do you guys do out there in rural Colorado Jeremy? “Honestly, I am pretty chill. I kind of like all the running and the cycling and the gym and stuff, I would do that anyway. It is kind of like my fun. But if I am away from it, I got a bow. I will go shoot my bow. Pretty badass.”

Like I said, exercise and pushing themselves every week seems to be what these guys do for fun.

Martin’s supercross game is no doubt better and although it is early in the motocross season, he appears to be as good as ever in motocross as he attempts to be only the fifth rider in the history of the sport to win three 125/250MX championships. Lining up every day with a rider like Tomac, like the other riders that go to these training facilities, seems to be the push that Jeremy needed this year. Of course, he is riding in the 250MX class while Tomac is in 450s and there is the elevation factor out there. Martin’s bringing a knife to a gun fight each and every day against one of the world’s best riders.

“For me, I just kind of pick a couple things to work on, just one or two things, and just improve that and then go off that,” Martin said about how he deals with getting beat every day. “Eli’s bike is quite a bit faster than mine up at elevation, so it makes a big difference. But I look at it like it is a good challenge. Imagine if I could close that gap. If I could close half a second a lap on Eli, I just look at it that way. I do not look at the gap, like ‘Oh my god, this is gnarly. He is just smoking me.'”

However Martin’s looking at it, things seem to be looking up for the #6 this year. Supercross went better than ever and now he is in a battle for the outdoor title. Stay tuned to see if Team Tomac can take both titles this summer.