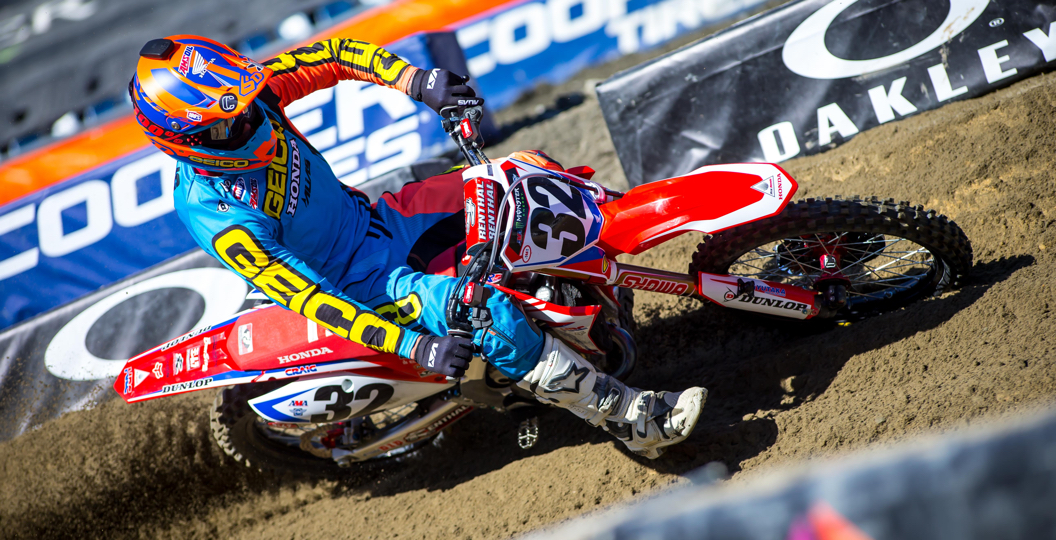 Look, there is not a hell of a lot going on out there in the Monster Energy Supercross series. It has been one of those years where injuries have struck. Seven out of the main event at the opening round of 250SX East series (including three out of the top four) are out, six of the main event from Anaheim 1 in the 450SX class (not including Yamaha’s Justin Barcia who just got back) are out (of course, KTM’s Broc Tickle is suspended and not hurt).

Yamaha’s Aaron Plessinger’s got fifteen points on Kawasaki’s Adam Cianciarulo with two races left, Husky’s Zach Osborne’s got fifteen on KTM’s Jordon Smith with one race left and, of course, Jason Anderson’s most likely going to clinch the 450SX title this weekend with over a race lead.

In short, there is not much going on. In fact, we do not even have any more Triple Crown races left! Whaaaaaaa! In all seriousness though, let’s touch on something that I’ve been doing lately.

Most of us, heck I would guess ninety-five percent of us in the industry started riding and racing dirt bikes, right? I mean, how in the hell else are you going to get into this line of work? We were all, at some point, captivated by the feeling of riding a dirt bike, jumping, the thrills of racing or whatever. I know I was. I started at age seven, raced my entire life in the spring, summer and fall in Canada.

My whole life was about Sunday’s and race day. Heck, I continued on racing all the way until I headed down south to become a mechanic. Granted, I was now a pro and pretty good at riding. I was also paying for it all on my own, crashing and dealing with injuries a lot as well though. From age twenty on up, racing became harder as I was trying to figure out what I wanted to do with my life.

In ’96 I came to the USA to be a mechanic and promptly stopped riding outside of a few rides here or there. I was just too busy wrenching, I had nowhere to live and I had no money to buy a dirt bike. Once I got settled a bit in 2002, I bought a YZ250 and rode it here and there. Then I quit again for four to five years and bought a Kawasaki KX450F in 2006 and rode that until probably 2009, 2010 or so. Sold that and honestly didn’t have a lot of desire to ride.

But Kris Keefer, my Pulpmx Show co-host, just would not leave me alone about riding. You see, Keefer loves dirt-bike riding maybe as much as life itself.  He’d rather ride than go to a race, he’d rather ride than have sex. Well, maybe not, but riding is JUST about everything to him and he couldn’t believe I wasn’t riding anymore.

Just because he was like this little pebble in my shoe, constantly there and constantly annoying me, I decided to try to ride again. Yeah, I sucked badly at first. I couldn’t believe how bad I was, how bad my arms pumped up, how badly out of shape I was… Wait that I could believe.

Keefer let me keep a Suzuki 450 he had (with Suzuki’s blessing) and I’ve been slowly getting back into it. Got the suspension set up for me, got some new gear, dialed in the bike a bit better than it initially was and, heck, I even ate crap and couldn’t really move for two days.

I’ve been trying to ride once a week, but haven’t met that goal yet and, yes, I’m terrible (it’s amazing I used to be pro, tabletops scare me now), yes I’m out of shape and get arm pump just looking at my bike, but you know what? It’s been fun getting back to riding. Having the feeling of hitting a berm right, having to remember what to do when things are coming at you fast and just getting roosted takes you back to why you started riding dirt bikes in the first place.

We all get caught up in this world we live in covering dirt bike racing, travelling, working regular jobs or whatever it is. It’s a good thing for all of us to get back onto a bike though. Dirt bikes are why you are reading this, dirt bikes are why I’m writing this and so if you haven’t ridden in a while, what’s stopping you?

Honda’s Christian Craig announced recently that his 450SX fill-in for Cole Seely has become permanent and he’ll ride 450MX as well for the HRC Honda squad. This past weekend he grabbed the holeshot in the main event (his starts had left him recently), which was great, but then he cross-rutted before the first lap was over and went down. That was bad.

I caught up to Christian after the main event to get to the bottom of everything.

Steve Matthes: On the Pulp Show this past Monday, we talked about your starts. You said, yeah, they have gone away. I agreed. Then tonight you got the holeshot. You were leading. It was looking so good. Then what happened?

Christian Craig: Well, first off, I give the props to Steve, Pulp Show. You really brought back my starts. It’s all you. Obviously, I got off to a good start, holeshotted. Haven’t done that in a while, so that felt good. Led half a lap, then cross-rutted, went right into a tuff block and decided to slide into first base off the track. Sitting there waiting for people to go by to get my bike, I was just furious.

Can we talk about the Jagger Craig tantrum where you jumped up and down a little bit?

Oh yeah. I was pissed. I was furious. I think people knew that too, obviously, but I think anybody’s going to be mad when you’re leading it and you throw it away to last.

I just haven’t seen a grown man jump up and down like that, in that kind of anger. But that’s okay. So that corner, a lot of guys were cutting it tighter than you. I missed right before it. Were you swinging it wide or did you go in the middle and hook that way?

No, they patched it after the 250s and I think the ruts were still in there somewhere. When I hit it, it just went right. Obviously after that I put my head down and charged. I think I ended up eleventh. I wanted inside the top ten, but that’s what happens.

We were talking about it up in the press box, because you were getting lapped and you were by far the nicest guy. You were slowing down and you were like, look, go. Privateer guys and guys who were on the bubble, still kind of fight. It’s just because you’re like, whatever. But, in the end, I think that cost you some positions.

Yeah, for sure. I was like right on [Chad] Reed and then I was going to let Eli [Tomac] by and it’s like he didn’t want to go by at the time. I’m like, “alright, what’s going on here?” I was too nice, but I’ve been on the other side of it when obviously where a lapper won’t move. I see it on both sides. It did cost me I think another position, but you can’t go back now.

Track was pretty easy for guys like you. Sand I guess was a little bit of a problem. It was just a difficult, weird track dirt-wise?

Yeah. From practice to race, it was like we went to an east coast race on practice and then we ended up at Anaheim or something in the race. When I went out in the heat race, I was like what is this? This is different dirt. It hardened up and then it got silty and dry. That was tough. The track was basic. A lot of it was similar to last week. If you notice the start, first section and then the second section was identical. They need to work on that. It’s alright. We’re going onto next week.

Did we have an issue with [Vince] Friese out there again or are we okay?

No. I think he thought I was a lapper for a second and then he saw me. He’s like, no, then he ran into me and I parked him. But I didn’t want a rerun from Monster Cup. I’m good with that. I’ll just try to pass and go.