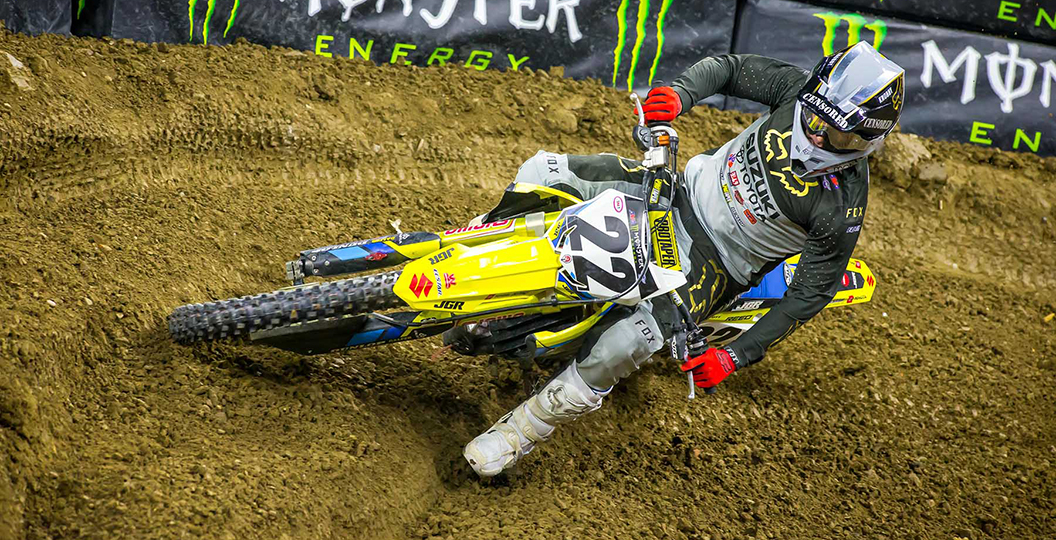 Although I’m still reviling in the afterglow of another Triple Crown race in the 2019 Monster Energy Supercross series, there is something else that got a bit lost in the news of how great the race was, Eli Tomac’s incredible first two mains and Austin Forkner’s dominant start continuing. Well, as lost as Chad Reed can be I suppose.

The veteran took a third overall with a great first main and two other good ones. He looked great, fitness was good and speed was as well. It was his first podium since early in the 2017 season when he was on factory Yamaha and the crowd in Detroit was digging it as well.

Reed credited his starts as a big part of his podium. “My starts since I’ve been on a Suzuki have been awesome. It’s really only been these seven races that I’ve been average,” he said meaning that back in 2009 his starts were great, but on the JGR bike they are a work in progress. “I see it on the data what I need to do better, but implementing that and with adrenaline and all those things is difficult. It’s never that easy. Otherwise everybody would be taking the holeshot, right? I think just finally executing exactly how you know how to do it. The last two weren’t terrible, but they weren’t great either.”

Reed keeps talking about how this might be his last year, the last time he is at a certain stadium or whatever. To me though, this “thing” between JGR Suzuki and Reed has already worked out. I think both sides should be talking about 2020 and if there’s a fit there or not. He’s top ten in the points halfway through the season, he’s run up front here and there in heat races and has two top fives including this third. I mean, he’s thirty-six-years-old. What else were people expecting?

I know that if you saw Reed last year you might have been a bit leery of how he was going to do this year. It was bad last season. Real bad. Reed hurt his ankle/foot at the Red Bull Straight Rhythm and it never healed up in time for him to get comfortable and in shape on the FC 450, plus he did his own team again and that made life even more difficult. There was a bright spot in the mud in Seattle but not much else. With all that and his age, I get the wondering.

However, as I stated, we are halfway through this season of his and it’s been very good for both JGR and Reed. The podium was cool, the first for the team in a long time and Chad sounds like he’s happy living back in North Carolina. There’s not a lot of money for Reed from the team, far from what he’s used to making so I suppose that could be something where Reed looks at the risk versus reward part of the sport and decides to hang it up. He’s got his gear money, he’s got a VIP program he’s running to help fund things and he’s got the rest of the JGR guys to have fun with.

Jeremy Albrecht, the JGR Suzuki team manager, told me a few weeks back that the team is done with trying to sign the big ticket rider. James Stewart and Justin Barcia are a couple of riders the teams signed to big contracts with very little return out of it. Albrecht said that the team, who’s yet to get a title sponsor, wants to have solid riders on the track that can make podiums and that the fans want to come out and see. Reed fits that criteria, although I’m sure Chad would like a bit more of a base salary from the guys there. Chad Reed has reinvented himself again and it’s been a fun ride. Let’s keep it rolling into 2020, yeah?