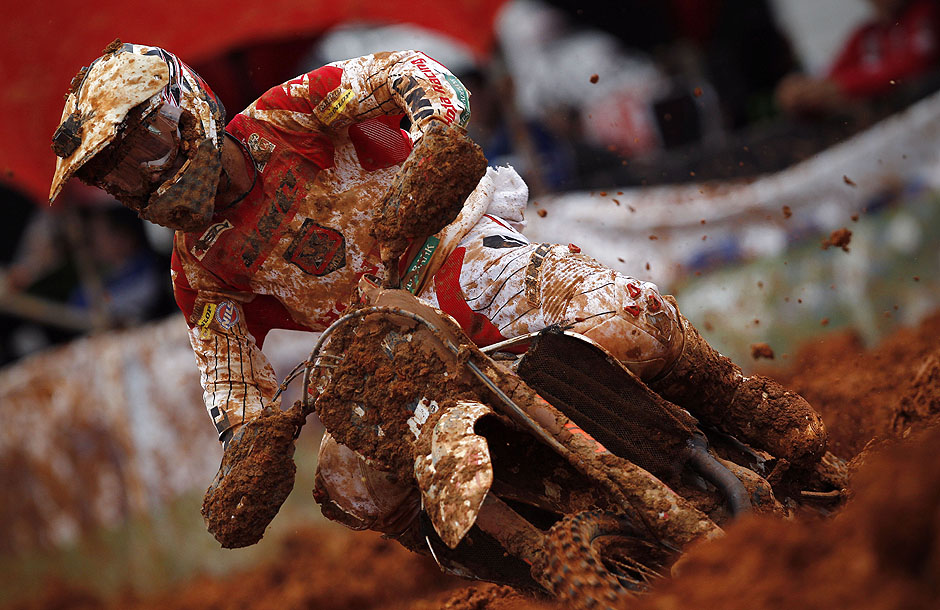 Honda World Motocross rider Rui Gonçalves put on a strong performance during today’s wet Grand Prix of Brazil in Beto Carrero to finish fifth overall in difficult conditions with teammate Evgeny Bobryshev in ninth place for round five of the MX1 World Championship.

After yesterday’s dry qualifying race, in which the recovering Bobryshev finished fourth with Gonçalves 10th, very heavy overnight rain made the track incredibly deep, wet and slippery ahead of today’s Grand Prix. While none of the MX1 riders took a sighting lap due to the conditions, Gonçalves got a great start to the opening moto into second position aboard his factory CRF 450R with Bobryshev close behind in fourth.

In a lottery of a race where visibility was difficult in the deep conditions with most riders aiming just to stay aboard their race machines, after one small slip off Gonçalves maintained a good rhythm while avoiding problems and strewn riders later in the moto to finish in a fantastic fourth place. Bobryshev had a fall on lap 10 of the 35-minute plus two lap moto, losing a number of positions, but managed to clamber his way back to ninth by the end of the race.

In race two the track had started to dry out, and Bobryshev this time got out the gate into fifth with Gonçalves sixth at the end of lap one. Both riders slipped back through the order mid-race while navigating the wheel-deep ruts in the clay-like, slippery soil and Gonçalves, who was riding with pain in his injured groin, finished eighth ahead of championship leader Antonio Cairoli for fifth overall with Bobryshev concluding the race in 10th place for ninth overall.

The team now heads back to Europe where both riders will be looking to fully recover from their injuries and illness while building back up their training programmes ahead of the next Grand Prix in St Jean D’Angely, France in two weeks’ time.

“It was quite a special race today with the conditions, as it was so wet and heavy. I made a good start in the first moto into second place and then a few laps in I made a mistake in front of the pits. I lost the front and went down, but it was so much effort to pick the bike up so I lost some time. I got going again and it took a while to get back into my rhythm, but I managed to get to fourth, which I was happy with. In the second race they fixed some parts of the track, but it was drying, so there were some really deep ruts. The start wasn’t as good as the first moto and in the beginning I was sat down a bit too much, so I started to get cramp in the injured leg. I couldn’t take my leg out on the corners and Toni was really pushing me there in the middle part of the race. Once I relaxed I started riding smoother and gained some positions near the end, so I ende d up eighth. I want to thank the team for all of their effort as they have worked so hard and we are beginning to move forward to the results we want. Also a huge thanks to Honda Brazil for all of their help this weekend, and I am looking forward to going home to get my injuries checked, so we can improve recovery even more.”

Evgeny Bobryshev #777: 9th overall
“Well I wasn’t feeling the best going into this weekend, but I wasn’t too bad and I was looking forward to the race. I had good starts into the top five in both races and I was battling with the guys, but it was the last ten minutes where I really struggled and I could feel I missed the time on the bike. I don’t know if I lost the focus or something, as I was off the track, missing the lines and I am really disappointed because it was a hard race to lose out so much in the last few stages. I know in some ways it was to be expected, but I didn’t know it could be like this, but I’m still on some medication, so maybe that isn’t helping either. Anyway, now we can head home and I need to get my training back on track to get my condition up to where it needs to be now that I am on the mend and I hope in St Jean D’Angely I will put on a better performance.” Roger Harvey: Honda Motor Europe Off-Road Manager
“Today was certainly a huge change in conditions over what we had yesterday, and it was a real lottery out there for the riders. For us the improvement in health we have in our riders wasn’t really reflected in our results, but having said that both riders put in decent performances in what were very difficult conditions. Rui is still suffering from the groin injury sustained in Italy and the thumb injury from Mexico just a week ago, so he did a good job and I am sure he will be looking forward to returning to Europe where he will be able to get back into his normal routine. With Bobby it’s very commendable he finished the races where he did. I know he is disappointed but with so little time on the bike, tough conditions and recovering from illness, it was always going to be a difficult job for him today. However, with things improving we look forward to getting the re sults we are here for with podium finishes for the next part of the season. Finally, I’d like to say a big thanks to Honda Brazil for all of their support and effort; they have done an outstanding job this weekend at what has been an excellent Grand Prix.”