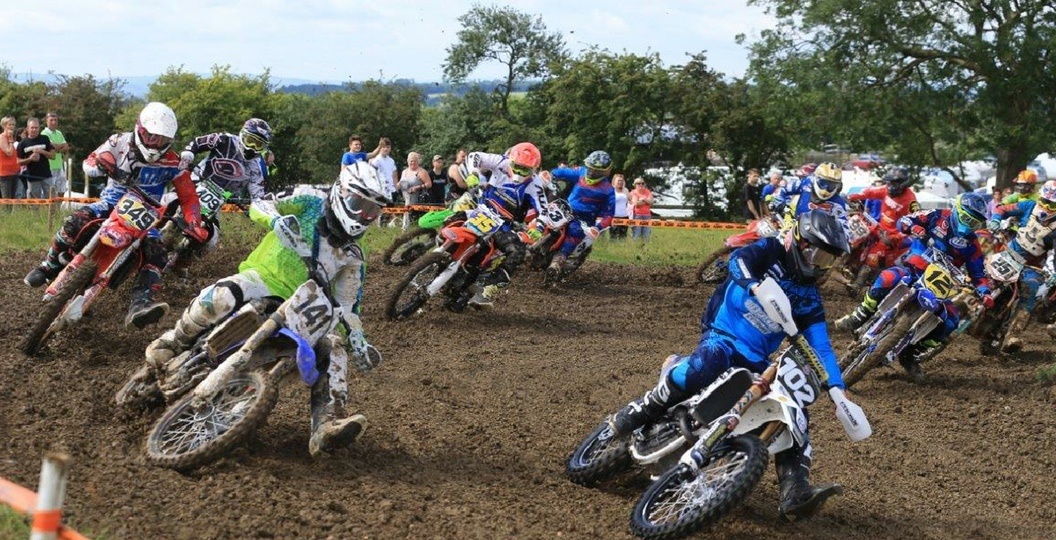 Last weekend saw Coventry Junior Motox Club head to their home track of Stratford for the annual Dave George Memorial Meeting. After a lot of hard work put in by the CJMX team prior to the event to get everything in place and the track ready for racing, we saw some action packed racing from all, over the two days.

Money raised from the event is being sent to Cancer Research UK and Myton Hospice in memory of Dave George who previously was Chairman of the club and a true ambassador to the sport.

In the MX1 & MX2 class we saw some bar banging action between the front runners Chuck Davies and Scott Bates, Jake Lord, Scott Hambridge and Jordan Pratt. However, it was Scott Bates taking the overall win for the weekend in the MX1 class followed by Jake Lord and Jordan Pratt. Over in the MX2 class it was none other than Chuck Davies taking the top step with an impressive 225 points, but closely followed by Scott Hambridge and Brodie Rogers taking 2nd & 3rd spots.

Next up was the very popular Clubman class which gave everyone some superb racing to watch across both days however with only a seven-point difference it was Graham Clark taking the overall win, with Luke Stapleford in 2nd, Andy Philpott in 3rd, Dan Tyldesley in 4th and Joshua Oates in 5th.

MXY2 Youth were up next and boy wasn’t there some close racing which took it to the final race of the day on Sunday to decide the overall winner with the top four riders only a couple of points apart going into the final race of the weekend, however Tom Daniels was on it and managed to take the overall win with 197 points, however Hayden Stevens and Aaron Patstone were only 5 points behind taking 2nd, 3rd spots on the podium and Ross Millard taking 4th spot with one point difference with 2nd & 3rd.

The over 35 Vets class was very popular with Jamie Thomas and James Houilham giving some close racing for everyone to enjoy from the sunny circuit of Stratford. However, Jamie managed to take it to the limit to walk onto the podium top spot on Sunday with an impressive 223 points, James Houilham was closely behind on the 2nd spot, Paul Baldwin on 3rd spot and Grant Kent & Darryl Shadbolt taking 4th & 5th.

James Shand, Jake Chamberlain and Sean Doyle were on it in the Evo & Twinshock class with the lads taking the podium spots for the weekend. However, a special mention to Tom Hambridge and Trevor Bedford who walked away with 4th & 5th positions. It was great to see a lot of Evo & Twinshocks out on track at the weekend.

Next were the young warriors of the club out on track (Auto & Junior) and firstly a special mention must go to Logan Coles who had his first go out with the Junior lads after his upgrade. Over the two days saw the Auto and Junior riders race together however it gave some quality races for both the riders and spectators. In the auto class it was Joey Benfield taking the overall win however it was very close as Kurt Evans was only 4 points behind, Danny Moore in 3rd, Logan Gardner in 4th and Tom Goodfellow in 5th. In the Junior 65cc class it was Tom’s brother taking the overall, George Goodfellow nearly had all five race wins however second spot rider Harry West gave it his all in race 3 to take the win for that race. In 3rd, 4th & 5th spots were Ezra Blackwell, Oliver Ruddock and Freddy Hodder.

Finally, it was the small wheel 85cc and big wheel 85cc riders, it was great to see Pirelli British Masters rider Ben White attend the event and gave everyone some first class racing to see. James Hyett took the second spot, Lee Percy in third, another one of the Pirelli British Masters rider Laney Monaghan in fourth and Jacob Bell taking the fifth spot on the podium for the Big Wheel 85cc class. Over in the Small Wheel 85cc class Harrison McCann proved to be untouchable by taking the overall win and one of the annual Dave George Memorial trophies for 2016, however Kyle Ingram who took second for the weekend wasn’t going to finish the weekend without a fight a managed to take the first race win for the event. In the remaining podium spots were Myles Taylor in third, William Hyett in fourth and George Jones in fifth.

As always each year there were the two Dave’s Mate’s races on the second day, where we saw a number of current riders and ex riders who knew Dave take to the circuit for two races and were presented with overall awards.

At the end of the meeting a big presentation took place with riders receiving their awards, prizes, holeshot awards and much more in the Holeshot Bar.

A massive thank you to everyone who attended and supported the event and we hope to see you again next year for the event.

CJMX will announce the final sum raised for the charities as soon as it has all been collected in.

Also on a final note on behalf of the family of Dave George, thank you all!