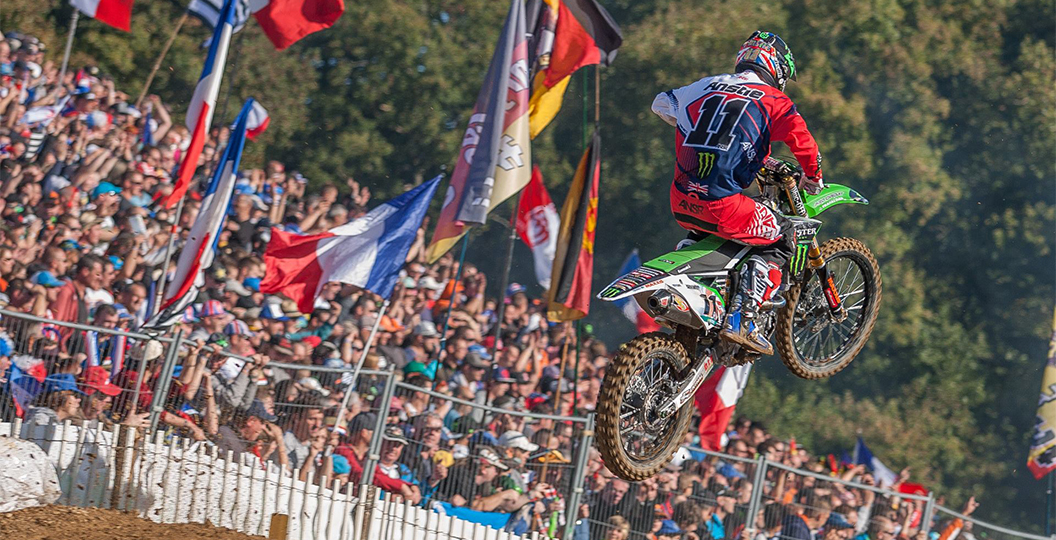 When Max Anstie was taken to a nearby hospital in Ernée last weekend, it seemed that Steven Lenoir would have a clear path to the MX2 Maxxis British Championship title. However, Steve Dixon and Kawasaki seemingly aren’t going to go down without a fight – it has been announced that Petar Petrov, Maxime Desprey and Darian Sanayei will contest the last round at FatCat tomorrow. Just hours away from the epic finale, Dixon talks about the lengths he’s going to to aid his team in their quest for the crown.

MX Vice: How much were you involved in bringing these guys over and what was the thought process behind it? Was it difficult to get done?

Steve Dixon: Obviously at the MXoN we were totally gutted. I mean, two freak accidents to our riders in one season! Max just stalled it in the corner and rolled down the first drop off. He actually just started the bike as he got hit, so he was very lucky to get away with the injuries he received. I started to think about the Maxxis British Championship, as the events started to sink in the day after. In fact, if I dare say it, this was my gut feeling as soon as it was announced that the final British round had been changed from August until after the ‘Nations.

I’ve been in this game far too long to know it is never over until it’s over. This was always my worry, but to represent your country as a rider and team comes first. Once the news was confirmed that Max could not ride, I spoke to Steve Guttridge and Harry from CLS about bringing Petrov over. He was in Ernée and agreed straight away, then Steve contacted Bud Racing about Desprey and I contacted Darian Sanayei.

It has been quite a task to pull it off and get them here; Petrov will be with his CLS bike and Desprey and Sanayei will ride our bikes, as they both have history with us. I had to arrange logistically for them to be here and have the right paperwork to race. I am interested to see how Sanayei goes as he lives at ClubMX, which is very similar to FatCat.

I couldn’t give up on our chances of still winning the title, as it as much about us as a team winning as it is for Max. Winning is part of the passion that drives my mechanics; they could have had an easy week, but they also pushed for this. They have had to make set-up changes today, as Darian rode, and they will both ride tomorrow before the race.

I’m guessing there are no orders here, other than to get the best possible result? Some fans think things are going to get dirty…

Steven Lenoir and Dyer & Butler have done a great job; I won’t make it easy for them, but I will be the first to say well done. We all know that he who has the red plate after the last round is the winner. We are not here to play dirty, but just to try to mix it up a bit and to know that we have done everything we could have done to try to win. After missing the first round through injury, Max won every race (except when he finished second to Herlings at Hawkstone) and without him there we will continue to push for podiums.

Off-topic slightly, but originally there was some talk of Mel coming back at this round. Is he focused solely on 2016?

Originally Mel was scheduled to ride here, but I had already told him to concentrate on getting ready for next season. There was nothing to gain by coming back early, but there was everything to lose if he hit his hand at this stage. After all, we must be thankful that we are even talking about a return after seeing his hand at round one!

It seems people are always quick to judge your bikes, how do you deal with that?

After twenty-six years as a GP mechanic and now a team owner, I have learnt to have broad shoulders. If someone comes up to me and talks sense then I’m all ears, but if it’s the keyboard warriors and judgemental people who don’t know the facts then I do not worry about it. I will talk on forums to try to correct or inform fans of facts, sure, but if they are a know-it-all then it’s not worth it.

There are a huge amount of good people in motocross and I continue to meet great people – even this week at the MXoN on the boat and at the track I met so many new friendly people. The small percentage of judgemental people don’t worry me. It’s funny, as this year we have won nine GP races, won the holeshot award, had four fastest laps and four pole positions, plus won every British race except the three against Herlings! Yes, we broke a valve at Valkenswaard and had a few issues on a Saturday but so have other teams – that’s racing.

It happens at F1 level with unlimited budgets; it’s a part of the mechanical territory associated with trying to win, but we constantly take on the factory teams and currently we have taken more riders to their first GP win than any other recent team! We don’t just work on the bikes, but we do work on probably one of the smallest budgets out there in an efficient manner from our workshop in Swanmore. Anyway, one thing for sure is that Sunday’s MX2 racing is going to be a whole lot more interesting this weekend. See you there!