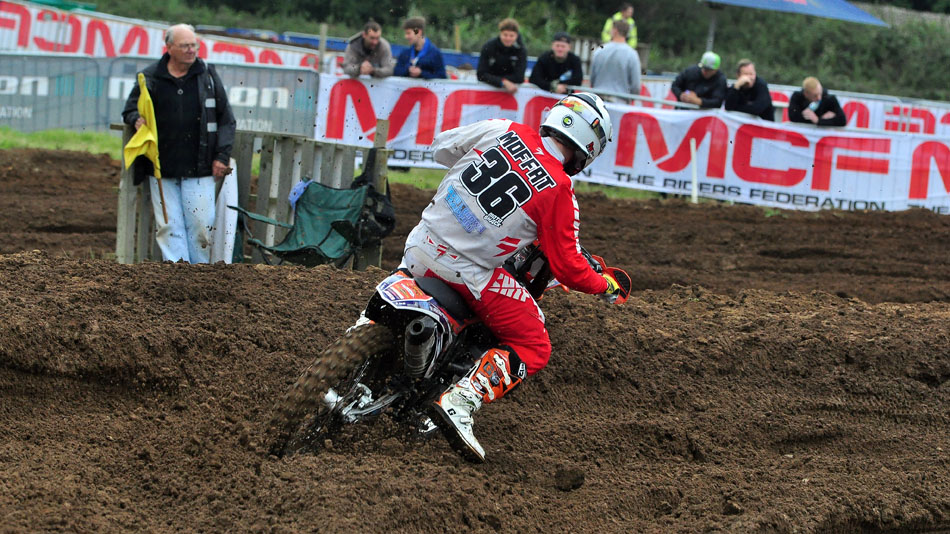 Lewis PhillipsFebruary 5, 20140
Matt Moffat had a pretty successful season last year, as he ended the MX1 Maxxis British Championship in thirteenth, just two points out of eleventh. With a little more luck, he could have been comfortably in the top ten, which is certainly where he belongs. Matt has signed with  JAR Honda  for this year, so we caught up with him to find out how the transition is going, and what his goals are for the fast approaching season.

MX Vice: How did the deal with JAR Honda come about for the 2014 season?

Moffat: With Wayne not on the team, I knew there was a space, and I have a friend on the IOM called Cactus who is friendly with Jonathan, who also lives there. So, that sort of sparked that, and then I contacted him and we sorted a deal out. But I can’t thank him and everybody at JAR Honda enough for the support this year – it’s mega!

MX Vice: A lot of riders were unhappy with the 2013 Honda. How easy was it for you to adjust to the new bike?

Moffat: Going from the steel frame to a Japanese bike felt a little bit weird. But, after a few outings and playing with a few clickers I soon started to gel with the bike – I find it’s a great bike to ride!

MX Vice: What is the biggest difference between your KTM from last year, and the new Honda. What does it do better, and worse?

Moffat: The biggest thing is the KTM 350 liked to rev, but on the Honda I don’t need to. So, I’m trying to ride it better in higher gears, it’s hard though, as I rode the 2-stroke also. But, riding it more has helped a lot lately, it’s a flatter smoother power on the Honda, so it’s not aggressive, which I like.

MX Vice: You have been to the RCU in the past, what kind of tips could they give a professional rider of your calibre?

Moffat: I was  there the year before; it was a fun couple of days. I think to hear a comment from Ricky [Carmichael] or [Jeff] Emig that your good in this corner or good on this jump is good in itself, because they are icons of the sport. Ricky has the nickname ‘GOAT’ – that says it all!

MX Vice: What goals have you set for this season? Do you feel like you are going to be in a position to improve on your 2013 results?

Moffat: I want top ten every weekend. You know, it’s tough, but get a good start and you have a a chance to do well. There are thirty-nine other riders racing also, so I want to do well. I feel like I have put more effort in since getting on the Honda, with it being a team. I have put more riding and training in, so I hope I can improve on 2013 – I want to.

MX Vice: It looks like you’ve been preparing for the 2014 season over in Spain. How much of an advantage is that, against the guys that have stayed in the UK?

Moffat: Yeah for sure, the weather is horrible at home, and most tracks are closed, apart from sand tracks, which I know how to ride. So, to be able to train hard-pack during the winter is something near impossible in the UK.

MX Vice: Does the Garmin Arenacross series appeal to you at all? Would you like to be racing in the arenas at the moment?

Moffat: No, not to me. I mean, it looks good and they are putting a lot of time into it, but I don’t practice it, and it’s a long series. I wanted to practice and try to get ready for racing, and with bikes, kit and all that different stuff to sort out, I wasn’t fussed. But, it looks good!

MX Vice: In the past, you have raced some international events (MX3 round, for example), do you have any plans to race abroad at all this year? Or will you be focusing solely on the UK?

Moffat: I will do just the Maxxis [British Championship] and the Red Bull [Pro Nationals], with the MX3 no longer, I may do rounds in Belgium/Holland, and with the team being Irish I may also do the odd race over there in 2014. So we will see, maybe the MX Nationals also, I’m not sure yet.

MX Vice: There will be a handful of GP riders joining the Maxxis British Championship this year. What are your thoughts on the competition?

Moffat: Yeah, it’s going to be mega tough. But, there were GP riders in 2013, also, that didn’t shine, and some of the older guys in the class may find it hard with the younger people. The GP riders race every weekend and will be fast, but you never know – we all have the same chance on the start!