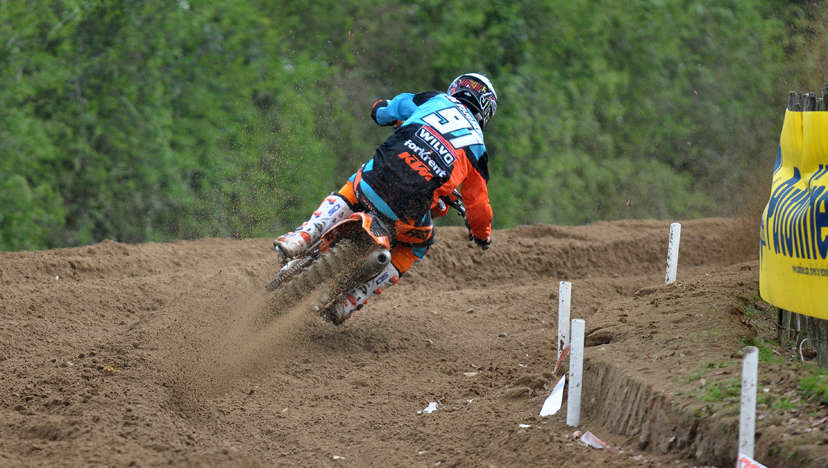 Matiss Karro has been dominant in the MX2 class at the Maxxis British Championship thus far. Although the standings may not reflect it, there is no denying the fact that the Wilvo Forkrent KTM rider is the quickest rider in the class. A fall in moto one robbed him of the overall at Lyng, but in the other two motos, he took a couple of convincing victories.

MX Vice: With a ninth and two wins in the three motos, it was a pretty good day for you.

Karro: Yeah, I am happy about my day – the first race was a disaster. I was third off of the start, and I wanted to settle down and get into the lead later in the race. But, on the first lap I made a mistake and crashed – then my head went. I got up, started to chase everyone down and crashed again. I eventually finished in ninth place, which I was not happy about. In the second race, I started in the same position, but learnt from my mistakes, and settled down. With three laps to go, there was plenty of time I passed Mel, got a gap straight away, and finished comfortably in first place, which I was happy with.

In the third race, I was fourth. I slowly got around my teammate, Adam Sterry – he was riding awesome this weekend. Then I got passed Neville Bradshaw, and then passed Mel comfortably again. I had some good lines, pulled a big gap, and won the race comfortably, again. I am happy about the weekend, I’m confident that I don’t need to get a holeshot, I just need to settle down and one by one, I can make passes and win the race. In regard to speed, I am faster than them.

MX Vice: Although you are not leading the championship, do you think that you may be in a better position than Mel [Pocock], because you know that you are the fastest rider?

Karro: Yeah, this weekend I only lost two points, which is okay. In one moto, you can change who is leading the championship. I bet he is more stressed, because he is leading the championship, and I have had some bad luck in the races. The season is long, and I need to stop making the mistakes that I have done in the first two rounds. It should be good at the end of the year.

MX Vice: Do you think that it is a disadvantage having to switch from the 350 to the 250 for this series?

Karro: It’s both, really. The 350 is similar to the 250 – the 250 is lighter, but it has less power. You have to ride the same with both bikes. It is quite hard to switch. When I went practicing on the 250 before this round, I thought someone had stuck the back brake on; I couldn’t get out of the corners, because it felt so slow. But, then I got comfortable on it again. It’s the same when I get on the 350, I think it is amazing and so fast. It’s hard to change, but I’m the guy that can adjust quickly.

MX Vice: Finally, are you happy with how the MXGP series has gone for you so far?

Karro: Yeah, I’m happy, but a little bit disappointed. We’ve had some bike problems, which is something everyone has to deal with. In Brazil and Qatar I had really good starts, which means the bike is awesome – it’s powerful enough. The mechanics are working really hard, so the bike is running good now. I just need to stay on two wheels, and get my fitness a little bit better, and then the GP’s should be good.