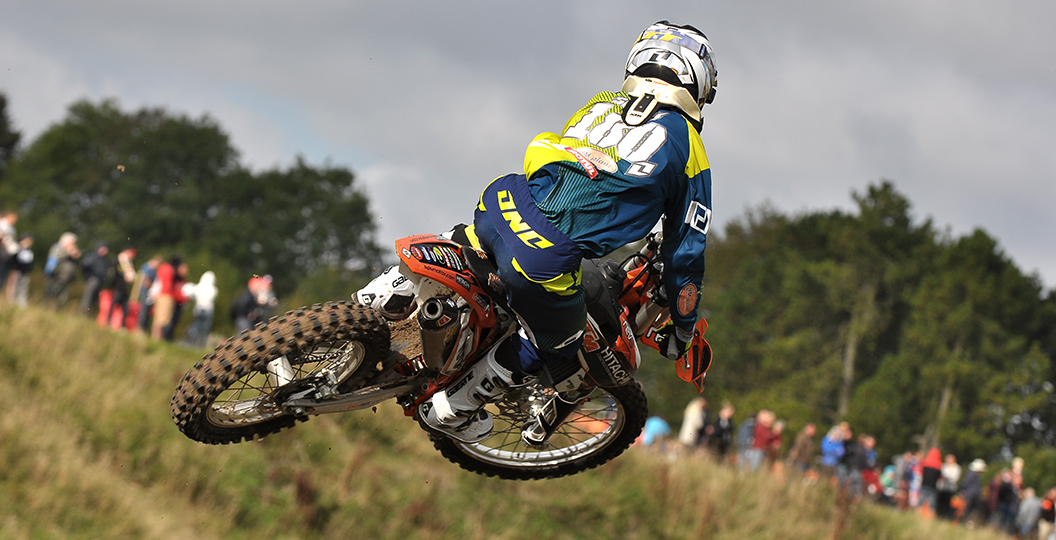 Josh Spinks showed some flashes of potential in the MX1 Maxxis British Championship this season. Although he finished eighteenth overall in the championship, he did creep into the top ten on two occasions. We recently caught up with Josh to discuss the support he had this year, his results and what he has in the works for the 2015 season.

MX Vice: Before we get onto your plans for next year, how did 2014 go for you? Did you achieve all of your goals?

Josh Spinks: I didn’t know what to expect coming into 2014, as I have not raced many Maxxis [British Championship] events in the past couple of years, due to injury and finances. Overall I am pleased with how the year turned out. I got to the first round hoping to get in the points, but the second race came as a surprise when I gated third, placed behind Anderson for a couple of laps before eventually finishing seventh; battling and matching the lap times of the big boys was a great feeling. I also had a good finish at the final round at Foxhill, with a tenth place in the third race. I also came through the pack after a second corner crash to finish twelfth, so it was a nice way to end the season.

I did struggle at the second round at Lyng, which was down to horrible starts and riding like a wally, but in the mid-stage of the season I was consistently around the fifteenth place mark. Another highlight of the year was finishing fourth at the Matterley Basin GP in the EMX300 class; it was my first time riding the track and it’s always nice to have a rip round on the 2-stroke! I’d like to say I achieved all my goals but definitely feel there is a lot of room for improvement. I learnt a lot from this year.

MX Vice: You were pitted off the side of the Hitachi UK KTM truck, what kind of support did you have from those guys? Do you think it helped?

Josh Spinks: After riding the latter part of 2013 with Revo Kawasaki, Mark at Revo was generous enough to get me some support with the Hitachi team. My bikes were provided for the year through KTM UK, which I’m very grateful for. I got a few bits and bobs from the team, but other than that the support came from Colin and James at SPS Ltd. I feel that the support from SPS helped me massively, as Colin was able to take the standard bikes and improve them a lot even on the small budget we had for the season, as well as being my mechanic at the Maxxis all year – I can’t thank him enough. He was also able to get me some last minute deals on tyres, graphics, goggles, oils etc that were not available to us through the team.

I’ve been fortunate to pick up some private sponsors such as 1stMX, SevenThreeFitness, TwoWheelsOnly and FatCat Moto Parc that have offered great support. Without those people I wouldn’t have been able to race.

MX Vice: You’ve finished right around the top ten a few times this year, is your goal to get in there consistently next year?

Josh Spinks: That’s definitely the aim for next season; I feel it’s a realistic goal.

MX Vice: Your best finishes came at Landrake and Foxhill, so would you consider yourself a better hard-pack rider?

Josh Spinks: Hard-pack riding comes much more natural to me than sand riding, through my schoolboy racing days I didn’t ride much sand, just hard baked tracks. I do enjoy the sand but I have had to work hard at it over the past few years to progress. I had a twelfth place finish at a race at FatCat in this year’s British Championship, so that was a positive.

MX Vice: You have spent a fair amount of time in MX1. What was the reason for moving up relatively early?

Josh Spinks: I moved up to MX1 in 2011 after just turning eighteen years old. I have never been aggressive enough to get the most out of an MX2 bike, coupled with the fact that the cost of getting the 250 competitive against the bigger teams became too much. I began the 2011 season on the 350 before switching to a 450 prior to the round at Foxhill, where I finished ninth overall. I only weighed about ten stone at the time – I was like a flag in the wind, but my riding style suited the bigger bike.

MX Vice: The 2015 season is fast approaching. Do you have anything lined up with teams or sponsors that can offer support for next year yet? If not, is there anything in the works?

Josh Spinks: I have, as yet, had no interest or offers from any teams. This doesn’t come as a surprise as there are multiple riders of my calibre battling for the few places available. I’m remaining optimistic and hope that a team will come forward to work with me and enable me to progress. I have secured SPS Ltd to support me again and have no doubt that Colin can make any bike competitive, it’s just a matter of finding one to ride. Motul have confirmed they are sponsoring me again, 1stMX are a big help to me, several companies have generously agreed to offer me some discounted products and Luke Ursell at SevenThree Fitness will be concentrating on getting me ready for next season. As I fund the racing myself it makes it difficult, but I am doing everything I can to get back on the line for next season.

MX Vice: If you don’t get anything worked out, will you do it alone or search for something new in a different series?

Josh Spinks: If I don’t find the support to race the British Championship, I will probably just look at picking up a cheap 2 stroke and have fun with it. It would be a shame to not race the Maxxis – I feel I can improve a lot on this year! I’d just like to say a huge thank you to the people that support me with my racing, It makes it possible for me to get on track!