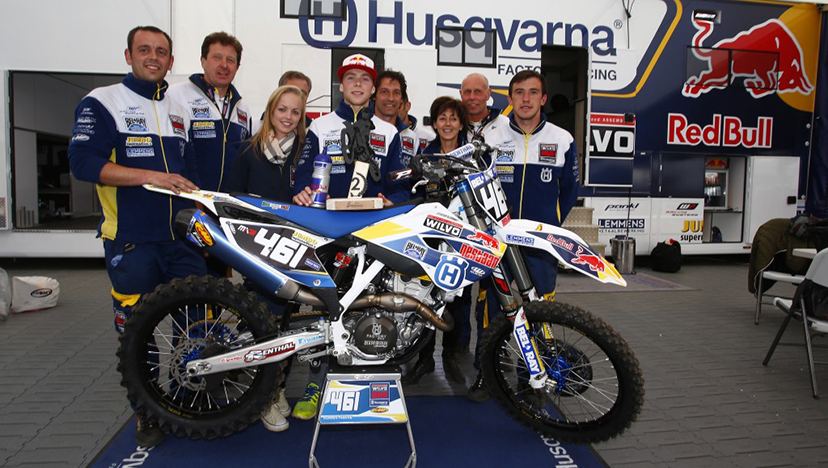 Eager to find out more about the team’s progress, Husqvarna Racing News spoke with Wilvo Nestaan Husqvarna Factory Racing team manager Jacky Martens, and asked him about the year so far.

Husqvarna Racing News: Firstly Jacky, you must be pleased with both the team’s progress and competitiveness so far this season.

Jacky Martens: “I’m really happy with how everything has gone so far. Step by step we have been improving at each round of the championship and are now regular contenders for the podium.”

HRN: How has the team settled into their relationship with Husqvarna Motorcycles?

Jacky Martens: “Coming into the season there was a lot of change. We’d just started our new relationship with Husqvarna Motorcycles and were learning about the new bikes all of the time. There was a lot of work to do but I could see that everyone on the team and everyone involved in Husqvarna Motorcycles were motivated to get it done. As soon as any request for new material was made it was immediately taken care of. I’m happy that we are going in the right direction but also that it’s at the right pace. It is important not to rush the process but instead move in the correct rhythm. I feel like everything is beginning to click into place.”

HRN: What’s been the highlight of season to date?

Jacky Martens: “Personally I think the GP of The Netherlands in Valkenswaard was my highlight so far. Obviously it was great to see Romain finish on the podium but for him to do it in the sand was even better. As a Frenchman sand riding isn’t what he grew up on but despite his inexperience – this is only his second year as a factory rider – he rode an incredible race.”

HRN: Currently third overall in the MX2 championship, Romain Febvre is having a fantastic season. What will it take for him to capture a race win?

Jacky Martens: “Like I said, we’re moving in the right direction and at the right pace so it’s about building up to that victory. Last weekend in Spain Romain almost got there. In the second race he rode great and was fighting for the victory. Unfortunately he crashed twice – once was not his fault – but still came back from those mistakes to finish strongly. At the moment he is lacking experience and the only way he can gain it is to learn from those negative moments like in Spain. As a rider it’s about learning and moving on from the bad stuff. Romain is nearly there, guys like Jeffrey Herlings are not unbeatable.”

HRN: Aleksandr Tonkov has had a bit of an up and down time of late. What is the reason for it?

Jacky Martens: “Your first year on a factory team is never easy, there is a lot to learn and take in. I think Aleksandr is so far doing well. He’s had some bad luck that wasn’t his fault and he’s also made some mistakes that were his fault. But like Romain he’s also learning. Aleksandr is very strong at starts but during the last couple of races he’s been outside the top ten on the first lap and in a class as competitive as MX2 it’s difficult to fight back through the pack. We’re working on this to get his confidence back and when it does he’ll be back fighting for a top five or six result.”

HRN: Are you surprised by the level of the competition in the MX2 class?

Jacky Martens: “No, all the riders in MX2 are good and are focused to win or be on the podium. They are also a young bunch of riders and are ready to push the limits. It’s been great racing this year.”

HRN: Finally, what are the team’s goals for the remainder of the championship?

Jacky Martens: “We want to see both riders running inside the top six on a regular basis. I think that is achievable. Aleksandr and Romain are capable of that. Romain is holding third place in the championship so hopefully he can hold onto the position for the rest of the year and with some more consistency from Aleksandr he can improve to sixth. For me I think that would be a brilliant end to the year.”

The FIM Motocross World Championship continues with round eight at Matterley Basin in Great Britain on May 25.