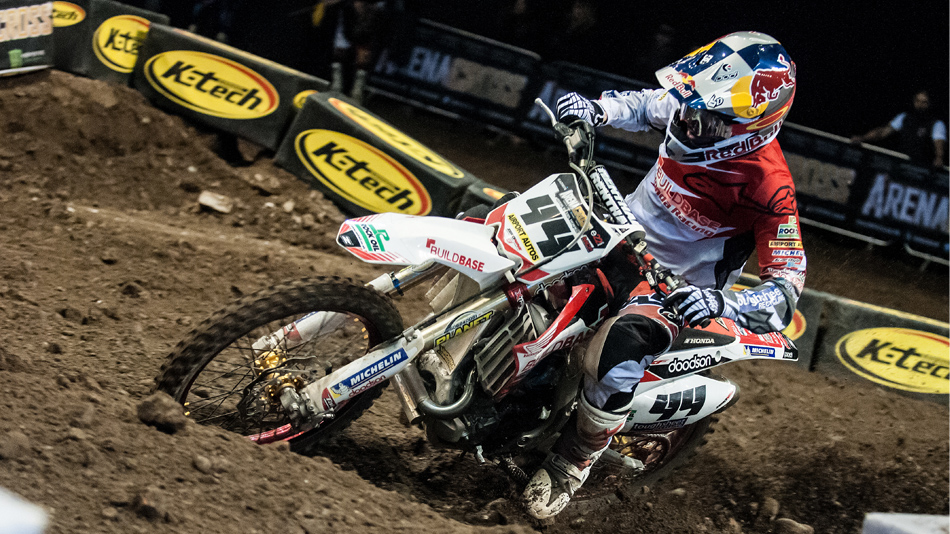 When Elliott Banks Browne clinched the win at the Liverpool round of the Garmin Arenacross series this past weekend, most people were very surprised. However, EBB has had the speed since round one; he just has not had the luck to go with it. However, he finally had everything go his way on Sunday, as he claimed the main event win, and on his birthday too! We caught up with him following his triumph.

MX Vice: Firstly, happy birthday; this is a pretty cool present, first in the main event. How does it feel?

Banks-Browne: Yeah, it was a cool present. I’ve had the speed at the other rounds, but unfortunately I have been a bit unlucky. Maybe my birthday gave me some luck? I couldn’t ask for anymore, I got maximum points today – I won the head to head and the final. The crowd here were amazing. When Fabien [Izoird] and I came together, and I passed him again, the crowd were going crazy. It really pumped me up, and made me ride a little bit harder. I’m pumped going into Newcastle.

MX Vice: From the start tonight, you looked smooth and in control. You didn’t look like you were pushing. It looked like you were just enjoying yourself?

Banks-Browne: To be fair, I think I rode better in the heat race than the main. I was a bit more tense in the main – I just wanted to do good. I had to be tense, because I was having a close battle with Fabien. I felt smooth all night, and I haven’t really been able to ride like I wanted to at the other rounds, because I haven’t got the start. If I can get out the start and ride like that again, we’ll see what I can do.

MX Vice: It looks like the experience of winning the British Championship titles played a part when you were out in front.

Banks-Browne: For sure. I knew in the arenacross, if you’re in a battle and get passed, you have got to go straight back around them, when they are not expecting it. I managed to get Fabien back straight away, and we had an awesome battle. It was pretty tense there, but I managed to hold it together. I couldn’t be happier on my birthday, and for the team and everyone who has put faith in me. You know, I wasn’t even supposed to be doing this championship; my main goal is the motocross – to win one was pretty special.

MX Vice: So, are you enjoying this series so far?

Banks-Browne: I’ve been on the podium twice now, and that is a lot more than I expected, especially with the field; it’s pretty stacked. I’m really happy – we’ll see if we can do it at the next one.