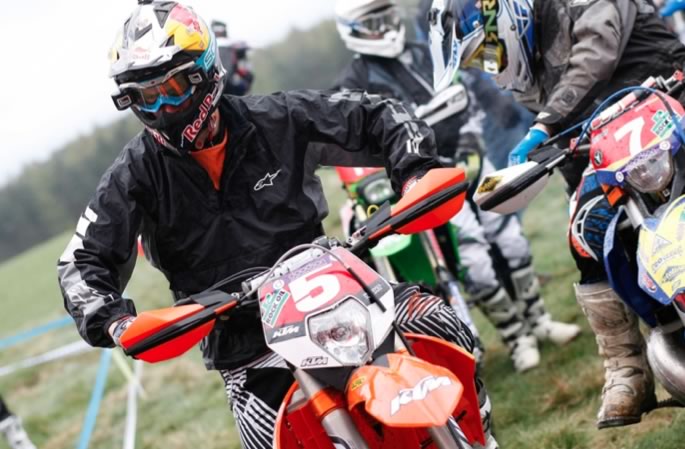 The 2012 ACU British Enduro Championship reaches its season finale at the Eelmoore Enduro in Hampshire this weekend (October 13-14). And it?s showdown time for the title of outright British Enduro Champion as David Knight returns from injury with a view to stealing the title from series leader Tom Sagar.
David Knight (KTM 500EXC) missed the third round due to a dates clash with a World round and has since then been sidelined with an abdominal injury, but will be back this weekend looking to add to his tally of four wins – and with the BEC title decided on a rider?s six best scores (from eight) two more wins would be enough for Knight to secure his 10th outright title. Tom Sagar (HM Moto CRE-F450R) has the points advantage coming into the round but with the discard rule he needs the wins too. Danny McCanney (Gas Gas EC300 Racing) returns to the British championship from a stellar performance at the ISDE and no doubt will be looking to establish a new pecking order in British enduro – can he top Knight as well as Sagar?
There?ll be plenty of action in the classes as well, as the British ISDE squad returns for the end of season spectacle. Jamie McCanney (Husaberg TE125) will be looking to seal up the E1-two- stroke title while Jack Rowland (Husqvarna TE250R) will be looking for E1- four-stroke honours.

Peter Burrell, South Eastern Centre Enduro Combine: “The Combine is very excited to be running our first BEC. We are nine clubs coming together to run this event, pooling our strengths, and we?re looking to stage a worthy season closer. The venue is that where the first British Sprint Enduro Championship round was held earlier this year and we?ll be looking to run the full sprint course from the BSEC (only part was used for the BSEC due to ice) as our special test. We?ll also have a 20-mile course that will be all new to competitors. Competitors and spectators will appreciate the concrete paved paddock area and the proximity of the special test to the paddock.

“We are pleased to see nearly all the ISDE Team GB riders entered, it?ll be good for the British enduro public to see them and be able to congratulate them on such a good job in Germany – and we?re sure they?ll fly on our course based on their form in the Six Days. We are also going to be running the event as a proper two-day event with a parc ferme and the associated work period on the Saturday evening (just like in the ISDE) which will bring additional interest to spectators – great news if they?ve never seen an enduro before – and of course extra tension for the riders!”

Entries for the Eelmoor Enduro remain open until Thursday 11 October, for regulations, details and directions go to: www.seecenduro.co.uk.

About the ACU British Enduro Championship

The ACU British Enduro Championship (BEC) is the premiere off-road motorcycle championship in the UK. With an officially-sanctioned 36-year history the championship encompasses the UK’s most long-standing, toughest enduros. Past champions include world champions David Knight and Paul Edmondson and worldwide enduro legend Geraint Jones. BEC enduros see riders compete for up to eight hours per day following a cross country trail according to a strict and often demanding time schedule, along the way completing special tests timed to the second. The winner is the rider who typically stays penalty free on the trail and sets the best times in the tests (the riders‘ scores being a accumulation of trail and test times – the least time wins). The BEC is governed by the ACU – the internationally sanctioned national governing body for motorcycle sport in the British Isles (except Northern Ireland).